Republicans veer toward electoral self-sabotage for the 2020 election

The pressure seems to be tearing Republicans apart 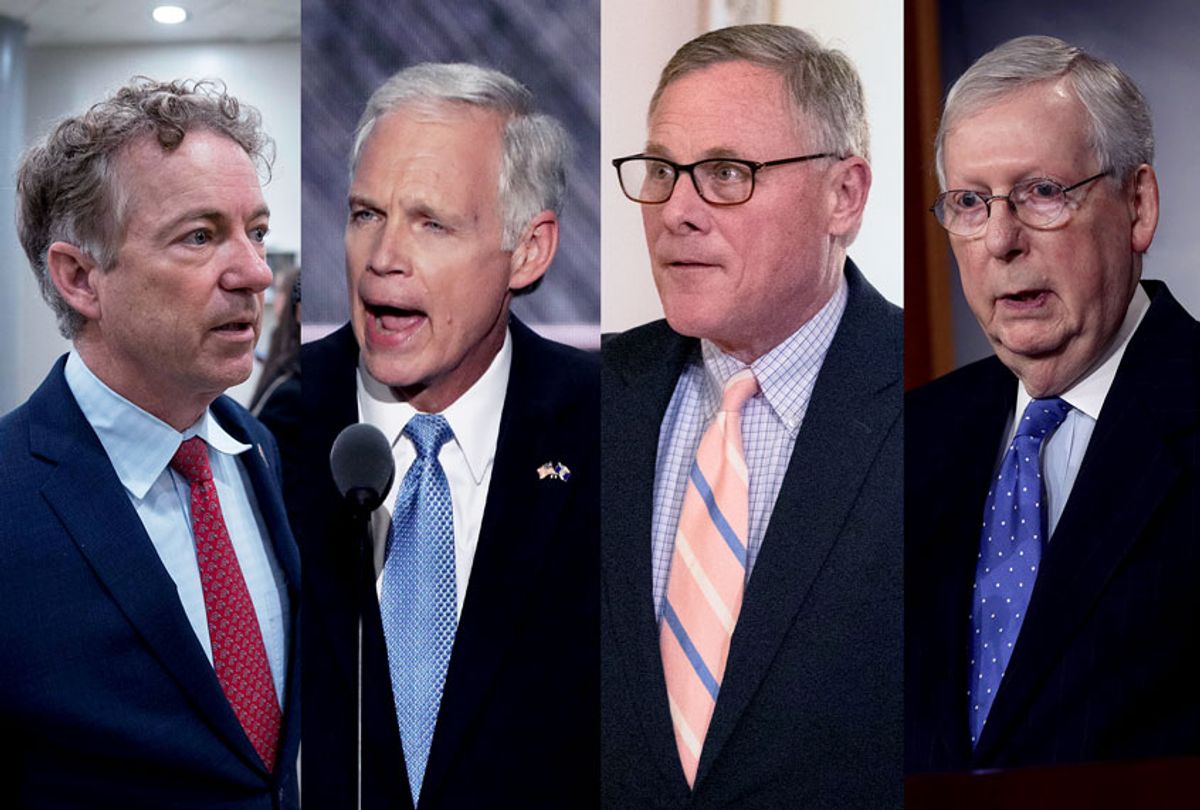 Every day, new polls come out that show Republicans in dire straits for the 2020 election. And it's no surprise — the economy is collapsing and the country is ravaged by a devastating pandemic, events that President Donald Trump is in no small part to blame for.

But the stress of impending doom isn't focusing GOP minds or encouraging them to band together. Instead, the pressure seems to be tearing them apart. And in their dysfunction, they may be ready to thwart the country's best chances of muddling through the present devastation further undermining their own electoral standing heading into November.

Rep. Liz Cheney (R-WY) has been the subject of much internal scrutiny and discord, as multiple reports and public comments have revealed. Though at times she has sought the president's favor, she broken with him at key points recently — inspiring the wrath of his fierce congressional defenders.

CNN reported that she became a target at Tuesday's Republican conference:

Several House Republicans attacked House GOP Conference Chairwoman Liz Cheney of Wyoming during a conference meeting Tuesday morning for supporting Dr. Anthony Fauci and splitting with President Donald Trump on a variety of issues over the past few months, three sources who were in the room told CNN.

Members including Reps. Jim Jordan of Ohio, Matt Gaetz of Florida, Thomas Massie of Kentucky, Chip Roy of Texas, Andy Biggs of Arizona, Scott Perry of Pennsylvania and Ralph Norman of South Carolina all chimed in to air grievances against Cheney.

During the conference meeting, Gaetz and Massie complained about Cheney supporting a primary challenge to Massie, the sources said. Jordan, the top Republican on the Judiciary Committee, listed areas where Cheney has publicly disagreed with the President, pointing to her resistance to Trump's plan to pull back troops in Germany and Afghanistan.

Roy hit Cheney for supporting Fauci, the nation's leading infectious disease expert, and complained that his Democratic opponent has retweeted some of Cheney's tweets.

But the acrimony also spilled over into public:

Sen. Rand Paul (R-KY), too, let loose on Cheney to the media.

"I mean she tries to sabotage everything he tries to do in foreign policy, so I don't know whether she's a good advocate for the President or not," he told CNN.

He also said: "I don't think she's good for the country."

Meanwhile, rifts are forming over what to do with the next coronavirus relief bill. On that matter, Sens. Ted Cruz (R-TX) and Tom Cotton (R-AR) have found themselves on opposite sides.

The Washington Post's James Hohmann reported that Cruz fumed at Cotton's advocacyfor more spending at a recent meeting, exclaiming: "What in the hell are we doing?"

According to Axios, the primary rift falls between Senate Republicans and the Trump White House.

Democrats, on the other hand, remain united. The House passed a $3 trillion spending bill in May that the Senate and the White House have refused to move on.

"Republicans are in complete disarray," said Senate Minority Leader Chuck Schumer (D-NY), according to the Washington Post. "Totally incompetent. Totally in disarray. Totally at war with one another."

CNBC reported Wednesday afternoon that the GOP is drifting toward potentially passing a bill that would extend the expanded unemployment insurance in the country after it is supposed to expire this week — but at a drastically reduced rate:

Republicans are considering extending the enhanced unemployment insurance benefit at a dramatically reduced level of $400 per month, or $100 a week, through the rest of the year, sources told CNBC.

Congress passed a $600 per week, or $2,400 a month, boost to jobless benefits in March to deal with a wave of unemployment unseen in decades as states shut down their economies to combat the coronavirus pandemic. The policy expires at the end of July as the U.S. unemployment rate stands above 11%, despite two strong months of job growth.

The GOP, which has not made a final decision on how it will craft unemployment insurance in a bill set to be released this week, previously discussed extending the benefit at an additional $200 per week instead of $600. Democrats want to make the $600 per week sum available at least until next year.

This plan, it should be clear, would be disastrous. There are still many millions of people unemployed because of the initial downturn caused by the coronavirus pandemic. Many are desperate and only scraping by as is. Slashing their benefits by $2,000 a month, with the virus resurgent and the economy at risk of getting worse, would be a brutal blow.

Even if Republicans were to eventually agree with Democrats and extend the $600 a week expanded unemployment (an unlikely scenario), observers expect the program will still lapse before it is renewed. This means recipients would face a gap in the payments they've been receiving, which could itself cause a major shock to the economy.

And all this rancor, dithering, and lack of urgency are likely to be electoral poison for the GOP. With a devastated economy and an out-of-control virus, the ruling party is likely to lose the White House and congressional seats no matter what it does. But guaranteeing economic distress and continued uncertainty for millions of families while the country is trying to recover from financial collapse would be a spectacular form of Republican self-sabotage.