The battle of Portland is just plain crazy

But then what else would you expect in Donald Trump’s dystopian America? 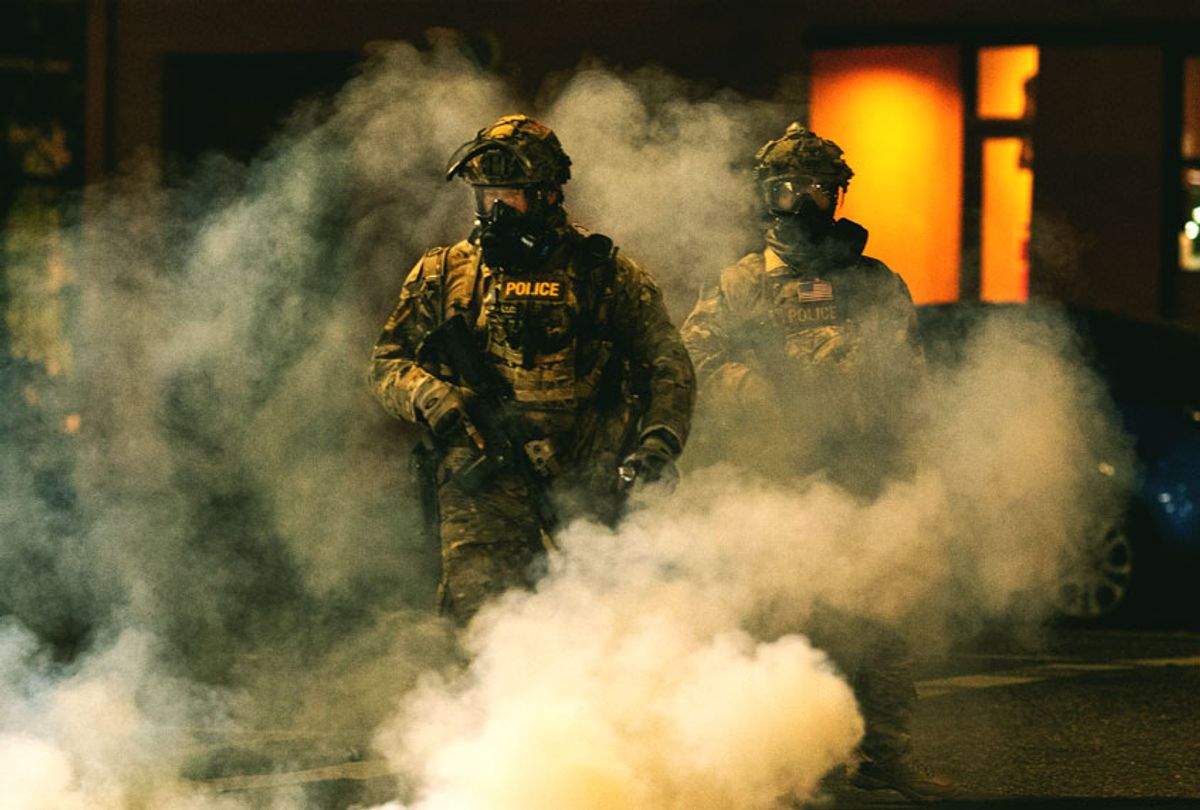 Federal officers operate amid tear gas while clearing the street in front of the Mark O. Hatfield U.S. Courthouse on July 21, 2020 in Portland, Oregon. The federal police response to the ongoing protests against racial inequality has been criticized by city and state elected officials as President Trump threatens to use Federal law enforcement in other major cities as well. (Paula Bronstein/Getty Images)
--

The more we hear about the streets of Portland, Ore, the nuttier that situation sounds — on all sides.

But then, this a time when:

So perhaps Portland's situation is par for the course.

We're being played as pawns in an imagined ideological banner-waving war.

Winning or losing aside, we ought to be able to agree on whether any of these strategies — thought through or not — are effective.

How much better off we'd be if the federal authorities, starting with Trump himself, could bring himself to look at the issue at the heart of the protests – a systematic bias built that keeps a knee on the necks of black and brown communities.

In Portland, demonstrations following the deaths of George Floyd and a long list of other black citizens stopped by police in routine matters have grown wild enough to be called riots by authorities.

Yet damage seems mostly minor vandalism to the outside of buildings, including the federal courthouse. That target was sufficient for the Department of Homeland Security to unleash at least 100 unnamed, unmarked customs and immigration agents.

The force has earned ignominy by snatching people almost at random off the streets to hold them for hours, charge some and release most. Local and state police, the mayor and governor, who asked them to leave, were ignored.

The demonstrators countered with a linked line of moms who put themselves between authorities and protesters. They were tear-gassed, so the women were joined by a line dads armed with leaf blowers to disperse the gas. This is not good.

OK, let's assert that social messaging demonstrations are most persuasive if they stay peaceful, and that throwing objects, tagging and starting fires just muddy the enforcement waters.

But sending uniformed thugs, untrained in riot control as it turns out, into a tumultuous environment without serious rules of engagement and using the tactics of secret police units fails any measure of effectiveness.

It doesn't work as intended and it raises a new set of issues for all sides over whether the president has a secret police force. Also, sending 100?

Worse, Homeland Security looked at several nights of this and concluded that it will double down — at the order of Donald Trump. The demonstrators have concluded their job is to keep pushing. The local authorities, including the police, caught in the middle here, have decided to let enthusiastic fires burn themselves out while keeping an eye out to prevent more dangerous levels of uncontrolled rioting. In other words, no one is being effective at any goals they want to pursue.

It seems unwise if not pointless to continue nightly attacks on an empty courthouse, and more than unwise to send unmarked agents to snatch people from the streets. That's the stuff of the worst of authoritarian governments — you know, the thing American values say they oppose.

Here's Kenneth Cuccinelli, acting deputy secretary of the Department of Homeland Security, saying that his agency had deployed tactical units from ICE and Customs and Border Protection to defend federal buildings in Portland and other unnamed cities: "You can expect that if violence continues in other parts of the country, the president has made no secret of the fact that he expects us where we can cooperate or have jurisdiction to step forward and expand our policing efforts there to bring down the level of violence."

How much better off we'd be if the federal authorities, starting with Trump himself, could look at the issue at the heart of the protests — a systematic bias built into governmental, financial, health, housing, job and education institutions that results in keeping a knee on the necks of black and brown communities.

Instead, as we have been seeing repeatedly, Trump turns to unequal Law & Order in pursuit of the defending his agenda first, and justice, in any of its forms, almost never.

In his contentious and long Fox News interview Sunday with Chris Wallace, as in its own unrestricted, unchallenged speeches and tweets, Trump comes down time after time:

It was nonsense, and Wallace successfully called him on it.

Trump, down in political polls, is lashing out. Therefore, there must be enemies to use as props in his re-election effort. Demonstrators who choose at this moment to attack a federal courthouse as the locals watch is too rich a target for Trump to ignore.

But nothing here is getting done. The protests continue, and next are deployments to new cities.

So, also unconstructive, is a campaign where Trump is seeking to undercut the opposition by deriding mail ballots, destroying many international relationships, fighting congressional coronavirus aid and eviscerating  environmental protections.

Trump could win an election for National Wrecking Ball in a heartbeat, but in solving problems, not so much.

Remarkable weekend recapitulations in The New York Times and The Washington Post outlined exactly how the Trump administration and the richest country on Earth lost control over coronavirus, for example.

Unleashing secret federal agents acting like thugs is merely adding objectionable behavior and confusion into the mix. It is not stopping the message of demonstrators, nor are demonstrators or local officials intimidated. Instead, the Portland mayor and Oregon governor now have sued the feds.

What have we gained? How many of these situations do we need to show ineffectiveness?