GOP plans to propose a $1,600 monthly cut to unemployment benefits. Economists warn the move may tank the economy 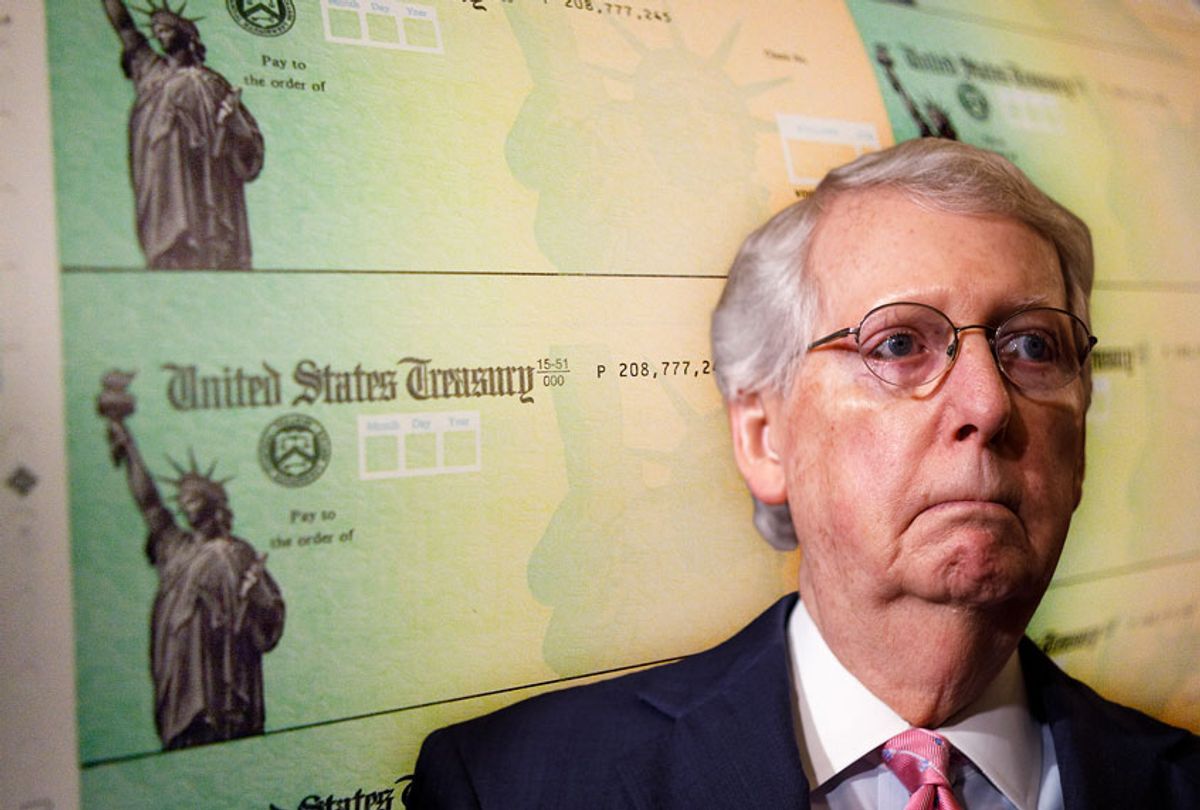 Republicans are set to unveil a plan to drastically slash enhanced federal unemployment benefits even as economists warn the move could cost the country millions of jobs and shrink the economy.

Senate Republicans have claimed that American workers who bring in a higher weekly rate than before the pandemic are disincentivized from going back to the office.

"It certainly does not have the backing that it had before because of many small businesses that have come forward and said that people just don't want to come back — that they were making more than they did when they worked," Sen. Pat Roberts, R-Kan., a senior member of the Finance Committee, told NBC News earlier this month.

However, there is no evidence that the increased payments have resulted in Americans refusing to return to work. Though House Democrats approved a full extension on the benefit in May, Senate Republicans plan to counter with a proposal to reduce the payment to $200 until states can implement a system which would reduce the total benefit from around 120% of previous salaries to 70% of previous salaries, according to The Washington Post.

It is unclear whether states would be able to implement such a system. The original plan in March to replace 100% of previous salaries came undone due to concerns that aging state systems could not handle doing so, leading to the flat $600-per-week payment. The National Association of State Workforce Agencies warned that it could take "eight to 20 weeks or more" for states to implement such a system.

Republicans are intent on slashing the payment.

"We're not going to use taxpayer money to pay people more to stay home," Treasury Secretary Steven Mnuchin said over the weekend, despite a surging pandemic.

A study by researchers at Yale published on Monday showed that workers who received more in unemployment benefits than their previous salary returned to their jobs at the same rate as those who got less from unemployment than their salary.

More than 30 million people are relying on the unemployment benefits, which expire this week. The vast majority have no option but to stay home since the number of unemployed Americans is more than three times higher the number of job openings.

Though there is little evidence to support the Republican claim that the enhanced unemployment benefits have made it difficult for businesses to bring back workers, several analyses have shown that the additional spending by unemployed people has helped prop up the economy amid a drop in spending by those still employed.

Mark Zandi, the chief economist of Moody's Analytics, projected that cutting federal unemployment benefits from $600 to $200 would cost the economy nearly 1 million jobs by the end of the year and increase unemployment by 0.6%.

"While this enhanced UI is only one of the many ways lawmakers have helped hard-pressed households during the pandemic, letting it expire or even renewing it at a lower amount will be a significant hit to the economy," Zandi wrote. "With unemployment still firmly in double digits and seemingly set to go higher regardless of what lawmakers do now, this would seem a poor policy choice."

A separate analysis from the left-leaning Economic Policy Institute projected that reducing federal unemployment benefits by $400 would cost the US 3.4 million jobs and shrink the economy by 2.5% over the next year.

The move would reduce Americans' personal income by about $339 billion over the next 12 months, costing the U.S. about 2.5% in gross domestic product and resulting in 3.388 million fewer jobs created over that time period, according to the analysis.

Senate Minority Leader Chuck Schumer, D-N.Y., cited the analysis on Twitter to show that the "Republican scheme to hurt unemployed Americans" will result in "needless pain for millions of families struggling because of the COVID-19 crisis."

"Let's be clear: if you lost your job through no fault of your own and can't go back to work because the Trump administration has mismanaged the crisis, Republicans want you to take a pay cut of 30 percent or even more," Schumer said.

A recent poll found that the majority of Americans support extending the $600-per-week benefit beyond July.

"Most Americans know we need to extend unemployment insurance for working families impacted by this crisis," Speaker of the House Nancy Pelosi, D-Calif., said. "Senate Republicans need to stop complicating this issue and extend this lifeline for families nationwide."

Economist Paul Krugman warned that slashing benefits would "deepen the slump" caused by the coronavirus.