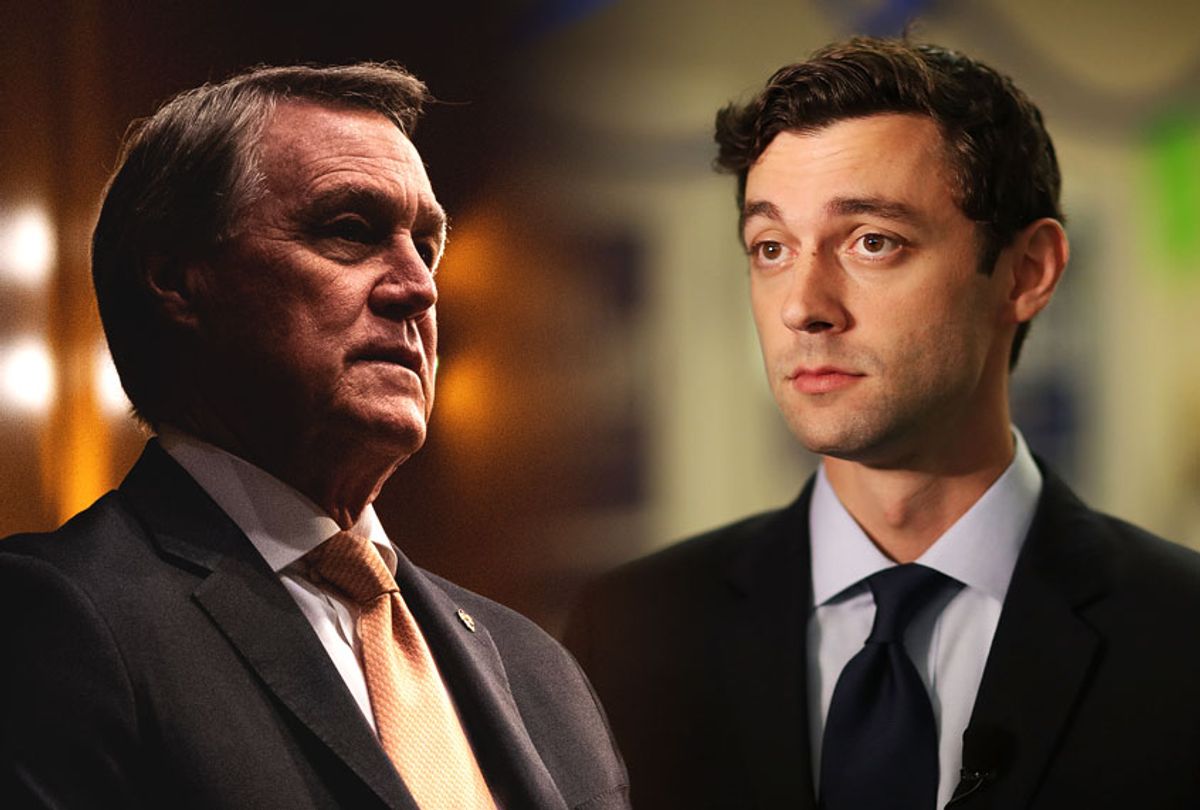 The campaign of Sen. David Perdue, R-Ga., took down an ad which appeared to have enlarged Democratic rival Jon Ossoff's nose Tuesday after it was condemned as "anti-Semitic."

The Facebook ad, which alleged that "Democrats are trying to buy Georgia," featured the altered image of Ossoff alongside Senate Minority Leader Chuck Schumer, D-N.Y. Both men are Jewish. The ad was first flagged by The Forward.

Blaming the "unintentional error" on the graphic design process, the Perdue campaign said it had removed the ad.

"In the graphic design process handled by an outside vendor, the photo was resized and a filter was applied, which appears to have caused an unintentional error that distorted the image," a campaign spokesperson told The Forward. "Obviously, this was accidental, but to ensure there is absolutely no confusion, we have immediately removed the image from Facebook. Anybody who implies that this was anything other than an inadvertent error is intentionally misrepresenting Senator Perdue's strong and consistent record of standing firmly against anti-Semitism and all forms of hate."

The campaign also pointed to a statement from former Sen. Norm Coleman, R-Minn., the head of the Republican Jewish Coalition, who praised Perdue as a person of "honor and high integrity" and called the anti-Semitism charges "simply false," Politico reported.

"Senator, literally no one believes your excuses," he said on Twitter.

Ossoff argued that the ad intentionally "distorted my face to enlarge and extend my nose."

"This is the oldest, most obvious, least original anti-Semitic trope in history," he added.

At a later news conference, Ossoff said the ad was "offensive and shocking." He called on Perdue to apologize and donate any proceeds raised from its use.

"This was an ad that was seen by thousands of Georgians. It was a fundraising ad," Ossoff said Tuesday. "I call upon Sen. Perdue to take the money that he raised using this manipulated image of my face and donate that money to groups that promote community healing and community unity and tolerance. Because after these last four years, that's what we need here in this country now as much as ever."

"As Trump amplifies, espouses, and normalizes bigotry & hatred, others in the @GOP continue to follow," Halie Soifer, who heads the Jewish Democratic Council of America, tweeted.

"A President accusing American Jews of disloyalty. A House Republican Leader tweeting anti-Semitic tropes. And now a Senator running an ad in which his Jewish opponent's nose is manipulated to look bigger," Dylan Williams, the senior vice president of the left-leaning Jewish group J Street, wrote. "How much more right-wing hate must we endure?"

Ossoff, an investigative journalist who previously unsuccessfully ran in the most expensive House race in history in 2017, is locked in a tight contest with Perdue, a vulnerable first-term senator. The Cook Political Report recently shifted the race from "Lean Republican" to "toss-up."

The Georgia Democratic Party called for Perdue to apologize and fire the vendor who produced the ad.

"This anti-Semitic attack against Jon Ossoff from Senator Perdue's flailing campaign has no place in our politics," state party chairwoman Nikema Williams said in a statement. "Now more than ever, we have to combat the ugly hatred we've seen continue to rear its head in this country."