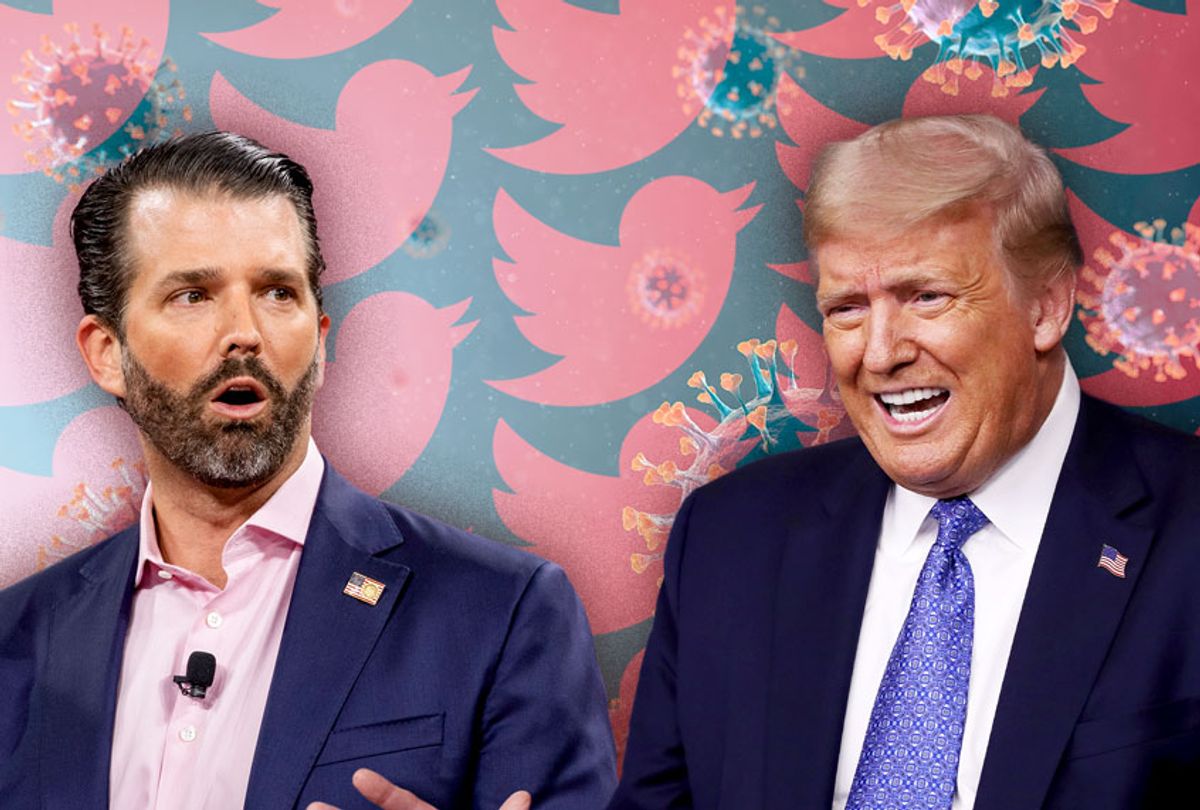 Twitter and other social networks removed a video of doctors making false claims about the coronavirus after President Donald Trump shared it Monday to his 84 million followers.

Twitter removed the video after Trump retweeted several versions of it and temporarily restricted Donald Trump Jr.'s account after he shared the same video.

The video, which was published by the far-right outlet Breitbart, shows people wearing lab coats and calling themselves "America's Frontline Doctors" in a press conference inexplicably held in front of the Supreme Court.

One woman, who says she is a doctor, argues that "you don't need masks" to contain the spread of the coronavirus, despite the advice of every leading medical body in the world, and baselessly claims that recent studies showing hydroxychloroquine to be ineffective were "fake science."

"This virus has a cure — it's called hydroxychloroquine, zinc and Zithromax," the woman falsely claims. "You don't need masks — there is a cure."

The Centers for Disease Control and other medical bodies all recommend the use of face coverings to prevent the spread of the virus.

"If we could get everybody to wear a mask right now, I think in four, six, eight weeks we could bring this epidemic under control," CDC Director Robert Redfield said earlier this month.

The Food and Drug Administration revoked emergency use authorization for hydroxychloroquine after it determined last month that it was ineffective in treating the coronavirus, despite Trump's hype, based on a growing body of scientific evidence. The FDA warned earlier this month that the drug had been shown to cause "serious heart rhythm problems, kidney injuries and other safety issues."

Studies from Brazil, Spain, the United Kingdom, the University of Minnesota and more all showed the drug to be ineffective against the coronavirus.

The video first went viral on Facebook, where it racked up more than 14 million views before it was removed on Monday, according to CNN. The video was also removed by YouTube.

"We've removed this video for sharing false information about cures and treatments for COVID-19," a Facebook spokesperson told the outlet, adding that the network was "showing messages in News Feed to people who have reacted to, commented on or shared harmful COVID-19-related misinformation that we have removed, connecting them to myths debunked by the WHO."

Trump shared several versions of the video and numerous responses before Twitter removed it. He shared 14 tweets within 30 minutes defending hydroxycholoroquine and questioning medical experts' advice.

"WOW!! Doctor calls out what should be the biggest scandal in modern American history," one since-deleted tweet shared by Trump said. "The suppression of #Hydroxychloroquine by Fauci & the Democrats to perpetuate Covid deaths to hurt Trump."

Numerous other Republicans, including the Jeff Landry, the attorney general of Louisiana and the chairman of the Republican Attorney Generals Association, shared the video as well.

Some of the posts shared by Trump alleged that Dr. Anthony Fauci, the director of the National Institute of Allergy and Infectious Diseases, had "misled the American public on many issues."

"'I have not been misleading the American public under any circumstances," Fauci told ABC News on Tuesday. "I don't tweet. I don't even read them, so I don't really want to go there. I just will continue to do my job no matter what comes out, because I think it's very important."

The woman in the video, Stella Immanuel, claims that she worked as a doctor in Nigeria before getting her medical license in Texas last year, according to The Washington Post.

Immanuel calls herself a "Deliverance Minister," who is "God's battle axe and weapon of war." She recently posted another video in which she rails against "the gay agenda, secular humanism, Illuminati and the demonic new world order."

After Facebook removed her video, Immanuel threatened the social network.

"Hello Facebook put back my profile page and videos up or your computers with start crashing till you do," she tweeted. "You are not bigger that God. I promise you. If my page is not back up face book will be down in Jesus name."