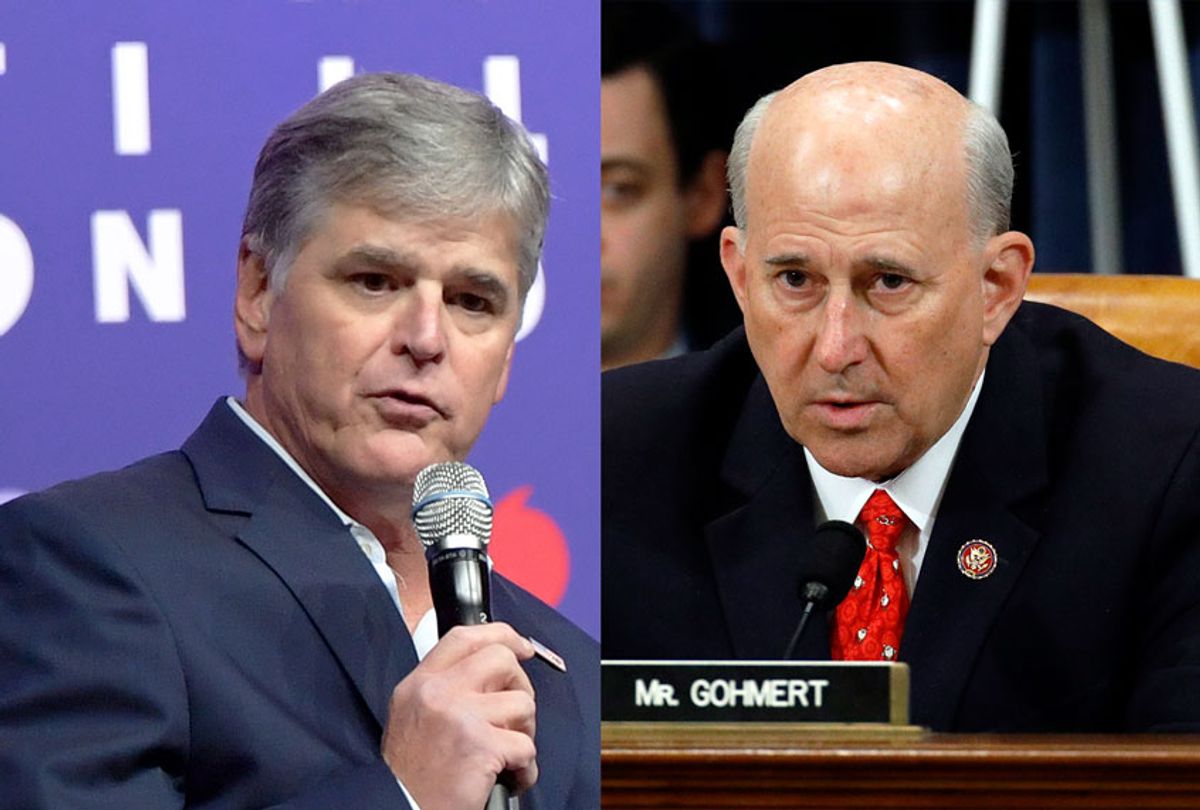 Gohmert — who earlier in the day tested positive for the disease at a White House screening ahead of a morning flight to Texas on Air Force One with President Donald Trump — told Hannity that he "would never have known" he was infected had it not been for the president.

After claiming that "all the models and all the doctors were wrong," Hannity inquired about Gohmert's health.

"Well, I feel OK. I'm a little tired," Gohmert said. "But when you look at all the symptoms of COVID-19, I didn't have any of them." (Doctors say fatigue is one of the key symptoms.)

Gohmert's audio failed for several seconds. When the signal cleared up, he credited Trump for knowing he was infected:

The president — don't you love him — he called me from Air Force One on the way home tonight. I told him, "Mr. President, if you had not invited me to go with you to West Texas, I would never have known I had the coronavirus. Because that's when I got tested for it, and when I found out I had it." And so that allows me to help protect the people around me better.

Gohmert had attended Attorney General William Barr's testimony before the House Judiciary Committee in person the day before testing positive for COVID-19. Video footage shows the two men, both maskless, only footsteps apart. Barr has reportedly tested negative for the disease.

The eight-term Republican has repeatedly expressed his disdain for facial coverings. Gohmert took a break from praising Trump at a White House roundtable in May to preemptively knock reporters in the room, saying the only reason the group would wear a mask was "to protect ourselves from you."

"We had tests, and nobody in here has the coronavirus unless it's somebody in the media," Gohmert said at the time. "So the only reason we would wear masks is if we were trying to protect ourselves from you, in the media, and we're not scared of you."

Gohmert continued to vent about reporters — and his critics — on Hannity.

"They say, 'Oh, I contaminate the gym.' I haven't been to the gym in months," Gohmert claimed.

"They say I berated staff for wearing masks — and that's a lie," he added. "And nobody has come forward. It's a lie."

After Politico broke the news about Gohmert's test results, one of his own aides asked the outlet in an email to include "the fact that Gohmert requires full staff to be in the office, including three interns, so that 'we could be an example to America on how to open up safely.'"

"When probing the office," the aide's email continued, "you might want to ask how often were people berated for not wearing masks."

In an interview with local Fox News affiliate KETK-TV, Gohmert appeared to blame his mask for getting him infected:

I can't help but think that if I hadn't been wearing a mask so much in the last 10 days or so — I really wonder if I would've gotten it. But I know moving the mask around, getting it just right, I'm bound to put some virus on the mask that I sucked in. That's most likely what happened.

CNN congressional correspondent Manu Raju on Wednesday reported that he had "never seen [Gohmert] wearing a mask on the House floor as he's carried on" with colleagues.

The Texas lawmaker claimed in June that he was not wearing a mask on the House floor because he was frequently tested.

Hannity, for his part, assured his audience that he follows the recommended guidelines for face coverings.

"I wear masks to protect older people. I meant it," he said to Gohmert, before turning to a favorite subject of his: the anti-malaria drug hydroxychloroquine.

The drug has become an unlikely political flashpoint amid the president's inexplicable affection for the unproven coronavirus treatment. Citing possible heart problems, Trump's own government has repeatedly warned against using it.

Hannity ticked off a list of studies purported to speak well of the treatment.

"Have you thought about — based on all that you've learned in consultation, obviously, with your doctor — the Ford study?" the host said. "The one that Dr. Oz cites study. The one study that said hydroxy, zinc and azithromycin — didn't say was actually retracted."

"Have you thought about any of these?" he asked Gohmert. "Have you talked to your doctor about it? Any thoughts on it for yourself?"

"My doctor and I are all in," Gohmert responded.

"I got a text just before I came on from a dear friend — a doctor — that just found out he had it, and he started the HQ regimen, too," he added.

"So zinc, arithromycin and the hydrogoxycine chlorine [sic], and that'll start in the next day or two," Gohmert concluded. "So thank you."

A study this spring found that viewers of Hannity, who regularly pushed hydroxychloroquine on his show, were more likely to die of COVID-19 than viewers of colleague Tucker Carlson's show, which has not peddled the unproven treatment as frequently.

You can watch the full interview below via Fox News: