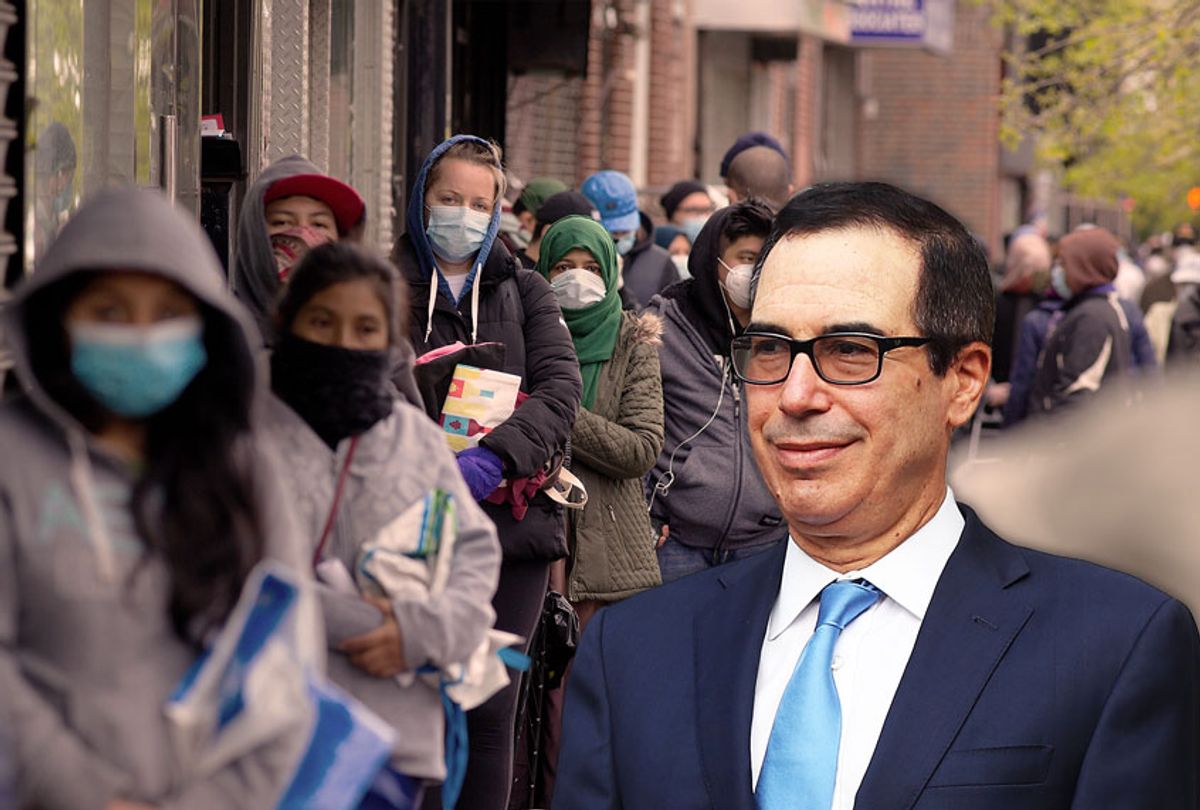 A new study by Yale economists out this week debunks the repeated GOP talking point that the $600 federal expansion of unemployment benefits has disincentivized people from returning to work — findings published the same day Senate Republicans released a coronavirus relief proposal which critics condemned as an "utter disgrace" that will "unleash widespread suffering" on people nationwide.

The Coronavirus Aid, Relief, and Economic Security (CARES) Act that Congress passed and President Donald Trump signed in late March provided those who qualified for unemployment insurance (UI) with an extra $600 per week on top of state benefits, a boost that meant total payments for some low-wage or middle-class workers exceeded their normal weekly incomes. With the GOP in the Senate now refusing to pass an extension approved by the Democrat-controlled House, those added benefits are set to expire on July 31.

Despite polling that shows the public popularity of the added boost—and economists warning that taking it away would spell financial catastrophe for the country—the Trump administration and GOP lawmakers who oppose an extension claim it encouraged layoffs early in the pandemic and deters people who make more from UI benefits than their former job from returning to work as businesses reopen.

The Yale study (pdf) destroys that GOP talking point. The economists examined weekly data from Homebase — a firm that provides scheduling and time clock software to small businesses — and found "no evidence that more generous benefits disincentivized work either at the onset of the expansion or as firms looked to return to business over time."

"The data do not show a relationship between benefit generosity and employment paths after the CARES Act, which could be due to the collapse of labor demand during the Covid-19 crisis," said co-author and Yale economics professor Joseph Altonji.

Although the Homebase data does not represent the entire U.S. labor market, as it is primarily focused on hourly workers at businesses like bars, restaurants, and retail stores, the segment of the workforce studied by the researchers has been disproportionately impacted by the pandemic. Additionally, as Yale News noted, "the researchers tested their results against employment outcomes in the federal government's Current Population Survey, a more representative sample of the labor market than the Homebase data, and obtained similar findings."

The Yale study found that people with expanded unemployment benefits actually resumed working at a similar or slightly quicker rate than others did. As MarketWatch reported Wednesday:

The Chicago Federal Reserve found a similar trend. "Those currently collecting benefits search more than twice as intensely as those who have exhausted their benefits," a recent study conducted by the Chicago Fed concluded. Typically, unemployment benefits last six months and on average pay individuals approximately 35% of their previous weekly salary, according to the Chicago Fed. People on unemployment benefits on average spend more than 14 hours a week job searching and send more than 12 applications a month.

The Health and Economic Recovery Omnibus Emergency Solutions (HEROES) Act that House Democrats passed in May would extend the $600 boost to UI benefits through January — but Senate Majority Leader Mitch McConnell (R-Ky.) has refused to put that measure to a vote.

The Senate GOP's new Health, Economic Assistance, Liability Protection, and Schools (HEALS) Act, released Monday, would temporarily cut the weekly boost from $600 to $200 until states can implement a new, more complex system to pay laid-off workers 70% of what they earned before losing their jobs. Although the proposal is reportedly approved by the Trump White House, critics warn the system would likely overwhelm states and cause notable delays in relief to those who need it most.

As the congressional debates over Covid-19 relief drag on, CNBC/Change Research polling results published Wednesday show that most voters in six key swing states want lawmakers to continue the aid that was implemented in previous coronavirus relief legislation, including the $600-per-week boost to UI. Across Arizona, Florida, Michigan, North Carolina, Pennsylvania, and Wisconsin 62% of voters somewhat or strongly support continuing that specific initiative.

Senate Minority Leader Chuck Schumer (D-N.Y.) suggested in a Tuesday night televised interview with Chris Hayes of MSNBC that Republicans in Congress are failing to serve not only the American public but also their own electoral interests by trying to cut government assistance during the health crisis:

"It's just a disgrace, what their bill does," Schumer said broadly of the Republicans' HEALS Act, which he called "a giveaway to corporate interests."