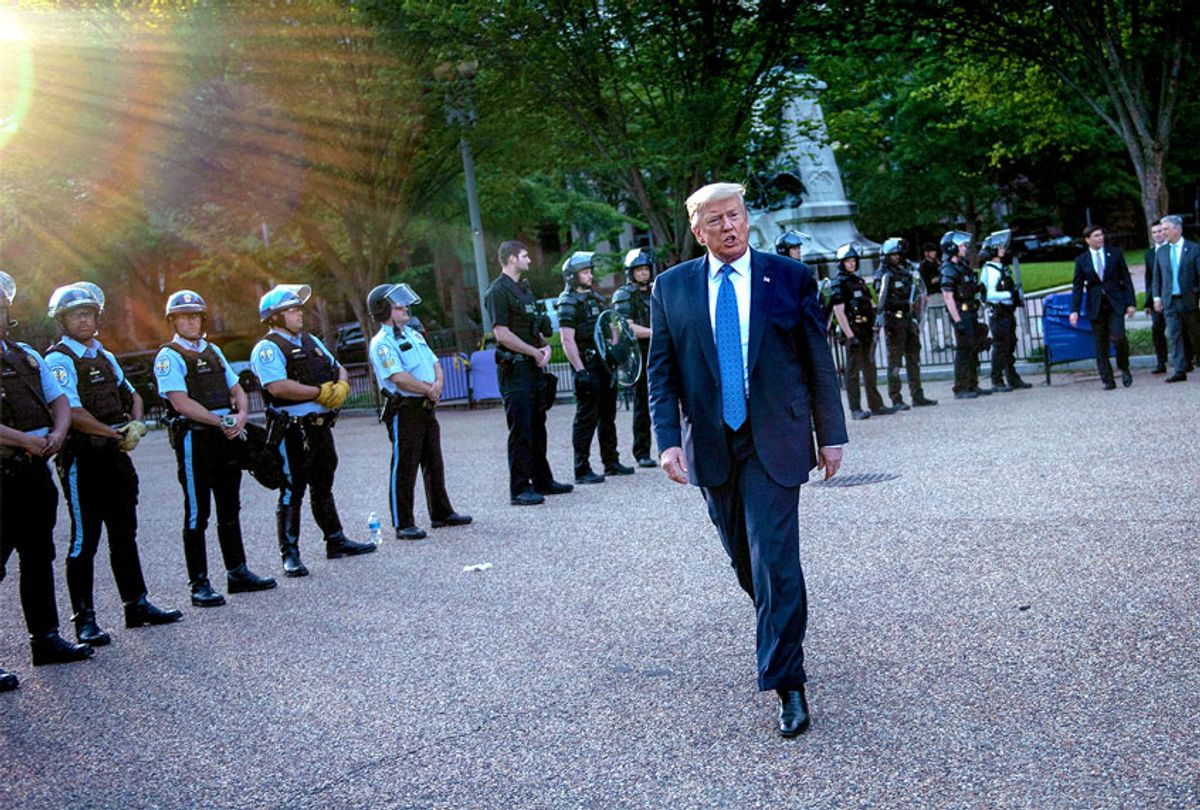 US President Donald Trump leaves the White House on foot to go to St John's Episcopal church across Lafayette Park in Washington, DC on June 1, 2020 (BRENDAN SMIALOWSKI/AFP via Getty Images)
--

An officer in the D.C. National Guard delivered a damning account of the events surrounding the federal crackdown on protesters in Lafayette Square in testimony released by the House of Representatives on Monday.

Adam DeMarco, a senior officer tapped to serve as a liaison between the National Guard and the Park Police, was on the scene during the June 1 assault on protesters, as his opening statement for a planned hearing on Tuesday explained. While the president gave a speech to reporters at the White House, federal officers, including the Park Police, violently cleared demonstrators, the media, and others from the nearby area. Shortly thereafter, the president walked across the street that had been cleared for a photo-op at St. John's Church.

Though presumably intended to bolster Trump's political standing, the optics of the events clearly backfired, as Vanity Fair reported:

In the days that followed, Trump's approval ratings tumbled to their lowest point in over a year, and their lowest point of the coronavirus pandemic, according to FiveThirtyEight's poll tracker. The first two weeks of June also saw Trump fall even further behind his Democratic rival, Joe Biden. Before June, Biden steadily held a four-to-six-point lead over Trump in national polls, fueled in part by massive support among the independent voters whom Trump won in 2016. Shortly after Lafayette Square, though, Biden began to open up an even bigger lead, a nine-point average lead over the president, with a Washington Post — ABC News poll this week showing Biden winning by as many as 15 points.

Many Trump administration officials have tried to downplay the assault on protesters and dismiss the criticisms, but DeMarco's account provides disturbing details about what was going on behind the scenes. His conclusion about the events is scathing:

Having served in a combat zone, and understanding how to assess threat environments, at no time did I feel threatened by the protestors or assess them to be violent. In addition, considering the principles of proportionality of force and the fundamental strategy of graduated responses specific to civil disturbance operations, it was my observation that the use of force against demonstrators in the clearing operation was an unnecessary escalation of the use of force. From my observation, those demonstrators — our fellow American citizens — were engaged in the peaceful expression of their First Amendment rights. Yet they were subjected to an unprovoked escalation and excessive use of force.

Here are seven key details from the statement.

1. DeMarco had no indication that protesters would be moved prior to 7 p.m., which was when the city's curfew would be in place

Defenders of the president, including Attorney General Bill Barr, have said that the protesters weren't specifically cleared for the benefit of his photo-op. Instead, they said the purpose was to expand the perimeter around the White House. DeMarco confirms that there were plans to expand the perimeter, but he didn't expect it to happen until nightfall:

I understood that a curfew imposed by the D.C. Mayor was not going into effect until 7:00 pm, so I was not expecting any clearing operation to commence before then.

At around 6:20 pm, after the Attorney General and General Milley departed Lafayette Square, the Park Police issued the first of three warning announcements to the demonstrators, directing them to disperse. I did not expect the announcements so early, as the curfew was not due to go into effect until 7:00 pm, 40 minutes later.

2. Federal officials didn't even set up a new barrier until much later

This fact suggests that DeMarco was correct to believe assume there was no plan to expand the perimeter until after the curfew was in place:

As for the new security barrier, whose installation was the stated purpose of the clearing operation, the materials to erect it did not arrive on the scene until around 9:00 pm, and it was not completed until later that night.

This supports the conclusion, as many critics of the president have argued, that the violent clearing of the square was for the purpose of his photo-op.

3. The warnings given to the protesters were entirely insufficient

Some have defended the abuse of the protesters by claiming that they were defying the warnings of federal officials, who announced plans to clear the protesters. But DeMarco's account confirms the reporting of journalists on the ground that these warnings were insufficient and inaudible:

4. As others who were on the scene have said, the protesters were peaceful

Journalists on the ground have said that the protesters who were removed were behaving peacefully. There have been some who have claimed water bottles or possibly other objects were thrown by protesters at some point, but DeMarco did not report anything like this:

A few minutes before 6:00 pm, I was standing near the statue of Andrew Jackson in the middle of Lafayette Square as DC National Guard personnel formed up behind Park Police units positioned in a line behind the perimeter fence on the H Street side of the square, facing demonstrators on the other side of the fence. From what I could observe, the demonstrators were behaving peacefully, exercising their First Amendment rights.

5. DeMarco provides direct evidence that CS tear gas was used by officials on the scene, despite repeated denials from the Trump administration

As the clearing operation began, I heard explosions and saw smoke being used to disperse the protestors. The Park Police liaison officer told me that the explosions were "stage smoke," and that no tear gas was being deployed against the demonstrators. But I could feel irritation in my eyes and nose, and based on my previous exposure to tear gas in my training at West Point and later in my Army training, I recognized that irritation as effects consistent with CS or "tear gas." And later that evening, I found spent tear gas cannisters on the street nearby.

6. DeMarco described extreme and excessive violence being used against civilians

7. Even DeMarco was unaware of all the federal agencies involved

One emerging crisis from the Trump administration is the use of unnamed, unidentified federal officers with unclear jurisdiction or rules of operation. It's disturbing that, in an operation in which DeMarco was involved as a senior National Guard officer, even he was unaware of the full range of federal agents present:

At approximately 6:30 pm, the Park Police began the clearing operation, led by Civil Disturbance Units and horse-mounted officers. The Secret Service, and other law enforcement agencies I was unable to identify, also participated in the push. No National Guard personnel participated in the push or engaged in any other use of force against the demonstrators.