Fox’s Judge Jeanine won't take coronavirus vaccine: "I'm not going to allow them to do that to me” 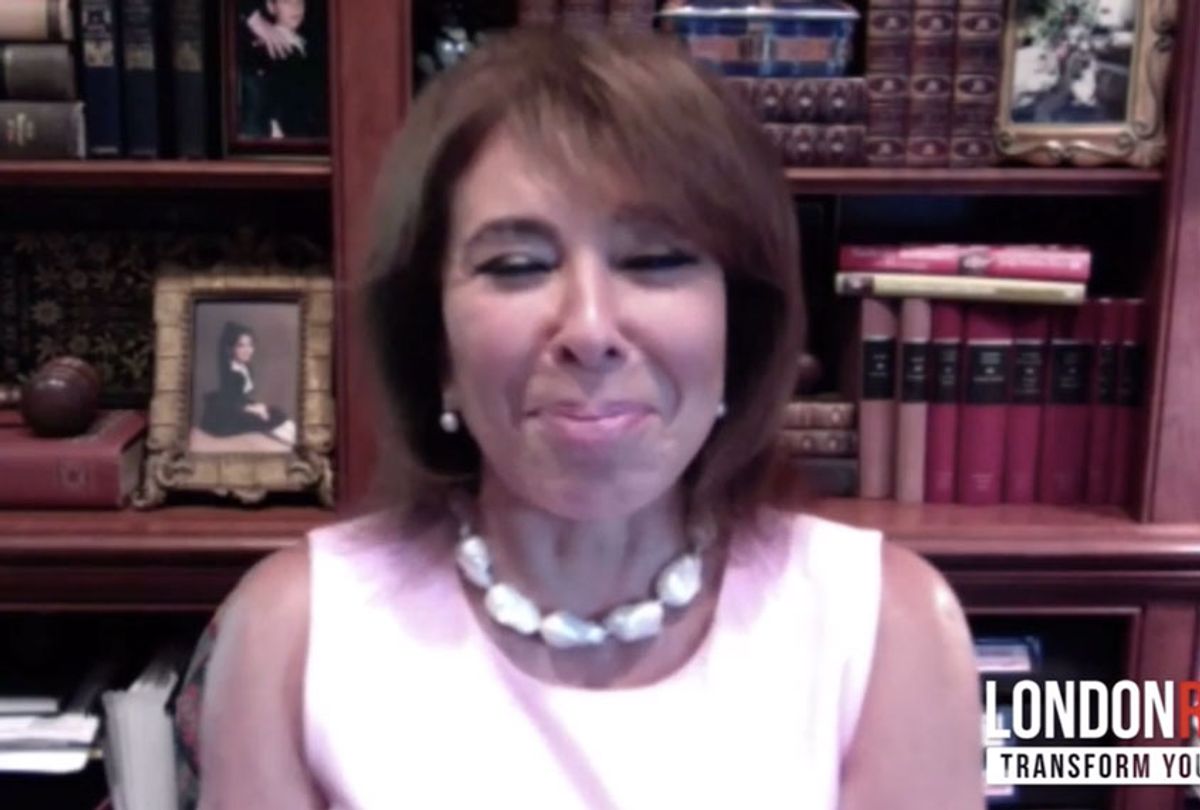 Fox News host Judge Jeanine Pirro, who has no medical or scientific background, told Brian Rose on a recent episode of the YouTube show "London Real" that she will not take a vaccine for the coronavirus, because she is both afraid of health risks and being controlled by unseen social forces.

Rose, the show's host, framed the question with an allusion to baseless conspiracy theories about sinister motives behind the companies, investors and public health officials contributing to the worldwide project to fast-track a vaccine.

"A lot of this technology seems to also be owned by some strange characters that have financial interests, even some of the institutions," Rose said. "I'm just a little hesitant to put untested things in my body without knowing. Is this just another thing we need to be wary of going forward?"

"Ditto. That means, 'Yes,'" Pirro, who at 69 years old is in the demographic most susceptible to the effects of COVID-19, responded.

Pirro tossed out a few words of praise for President Donald Trump's contributions to the effort, in the form of Operation Warp Speed, before wondering "who are you going to vaccinate" as she dismissed the enterprise as potentially dangerous.

"Look, the president is doing everything that he can — Operation Warp Speed. And that's Donald Trump, 'Make it fast, don't tell me you can't do this in this amount of time,'" she said. "But we just spent $2 billion to get 100 million vaccines. I mean, who are you going to vaccinate?"

"I don't want a vaccine. I want a therapeutic," she continued. "You know, until you tell me that that vaccine is safe — and only time will tell — until you tell me what the long-term consequences of that vaccine are, I'm not interested in putting it in my body. And by the way, I'm older. And I probably should be one of the people to be vaccinated, but I won't. I'm not going to allow them to do that to me. And then the question is, 'Will you be forced to do it?' You know."

Rose leapt from there to Orwellian government-assigned citizenship ratings.

"What freedoms will you lose if you don't do it?" he wondered. "What property will you lose? What privileges? And then it's to the China model, where literally they have social scores. And if you're a good boy and girl, you can go on plane flights. And if you're not, then you can't, and your civil liberties get removed."

The European Union has banned Americans because of the unremitting spread of the coronavirus in the U.S.

"And, you know, I don't like this potential future," Rose continued. "It's 1984. It's Orwell. And it's happening right in front of our eyes, Judge. And I just worry that no one's watching it and seeing it for what it is."

The day of the interview, the White House put out a statement titled, "President Trump Is Leading a Once-in-a-Generation Effort to Ensure Americans Have Access to a COVID-19 Vaccine."

Trump, who himself has at times expressed anti-vaxxer sympathies, has for months promised a vaccine, frequently claiming unrealistic timelines were possible before being corrected by experts in his own administration.

Public health experts in the U.S. and around the world have repeatedly insisted that societies impacted by the coronavirus will not be able to begin scaling up to full economic engagement without a vaccine. The New York Times reported this weekend that scientists have expressed concerns that vaccine development might fall victim to political influence.

A slide from a Health and Human Services presentation at the White House this April reportedly said: "DEADLINE: Enable broad access to the public by October 2020." The date was in bold.

Pirro pivoted from vaccines to masks.

"What is the point of the mask?" asked the judge, who unique among many of her Fox News colleagues, has boasted about her mask use.

"The point of the mask is to basically kind of dehumanize. It's to frighten people," she said. "You don't know who's behind the mask. It's to give people cover. It's exactly what the anarchists and the protesters need. It strikes fear. There is something going on — there are all kinds of subliminal messages to that mask."

A study at the University of Queensland in Australia found that anti-vaxxer conspiracy theories resonate particularly well with Trump supporters.

"Trump supporters are considerably more vaccine-hesitant than other Americans, and are more likely to be concerned about side-effects," said the study's lead author.

You can watch Pirro's interview via Media Matters below: