The University of Texas says it will do 5,000 tests a week — but won't say what happens when there's an outbreak 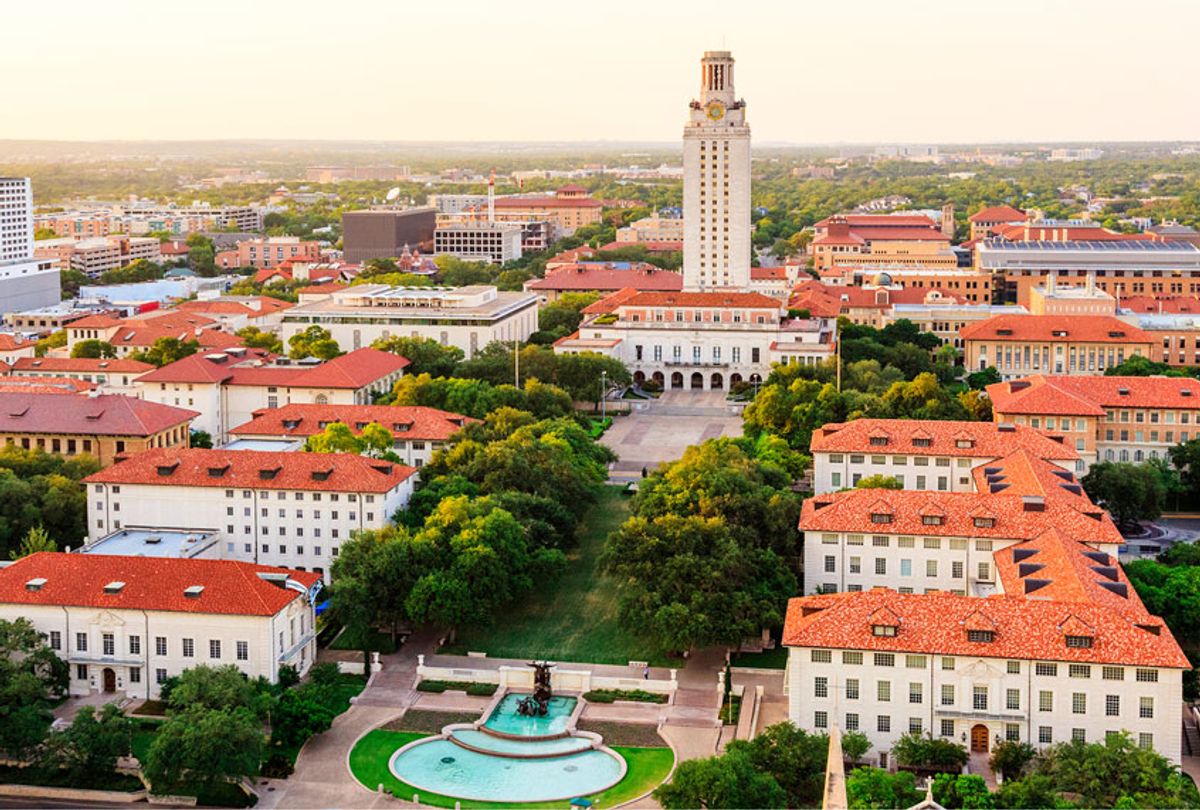 The president of the University of Texas at Austin (UT) sent an email Wednesday announcing that the school anticipates that it may need to provide "several hundred tests" each day for community members who show signs of COVID-19.

The university, one of the largest and highest-ranked research institutions in the country, has studied coronavirus in a joint research program with the Wuhan Institute of Virology and publishes one of the premier epidemiological models in the United States. UT's endowment of $31 billion was second only to Harvard's in 2019.

The school will put those resources behind providing tests for 5,000 members of the 74,000-person UT community each week, regardless of symptoms, according to the email. Three rapid-response machines, currently on order, will yield approximately 100 tests per day, with a 15-minute turnaround time.

University spokesperson J.B. Bird told Salon in a phone interview that the school will provide an additional 100 to 200 weekly tests for symptomatic individuals through its Dell Medical School.

It's a massive undertaking. But a case study of one of the country's largest, most capable and proactive institutes of higher learning suggests a grim outlook for schools nationally. It raises questions about the preparedness of schools with fewer resources, as well as just why any school, including the Austin campus — which has already seen one COVID-related death — believes it's ethical to open its doors this fall.

Bird said that while the university cannot release preliminary enrollment numbers for the fall, officials estimate that 4,500 students will occupy the school's on-campus undergraduate residence halls. Full capacity for those halls in a normal year would be 7,300, out of UT's total student body of roughly 50,000. The institution also employs about 24,000 faculty and administrative staff.

In June, 13 Texas football players tested positive for COVID. In May, 10 members of the school's custodial staff tested positive; a few weeks later, one died.

Assuming UT's typical 50,000-student enrollment, the school's anticipated rate of testing would require about 15 weeks to test each student and employee once. That timeline covers the entire semester, from the time residence halls open Aug. 20 until full remote learning kicks in after the Thanksgiving break.

That also assumes full compliance: Testing and contact tracing is voluntary, and will be strategically deployed among residence halls and individuals exposed to high-risk conditions. No students will have to pay for tests, and the school's insurance plan covers most employees.

UT officials could not provide an estimate for how many of the estimated 45,500 students who won't be living in residence halls (given typical enrollment), will live off-campus in the city of Austin, even if they opt for remote learning.

According to Bird, roughly half of UT students have chosen fully-remote learning. (He could not say, however, what the total fall 2020 enrollment was.)

Bird pointed out that while half of students are expected to take remote classes exclusively, those classes will account for about 75 percent of on-campus seats, largely attributable to massive prerequisite survey courses. Hybrid courses that combine online and in-person instruction will account for between 20 and 25 percent of seats, and the balance are fully in-person.

"The phrase 'reopen' conjures return-to-normal," Bird said, "but that's not the situation at our school."

Still, university officials do not know how closely online enrollment will track with students who may return to Austin to mingle in on- and off-campus life.

The UT, which operates as a largely independent community within Austin, has laid out different guidelines and phases depending on the potential spread of infection. Asked what happens when students begin to test positive — as is certain to happen at some point — Bird was vague.

"No single factor would cause us to change our approach, but if circumstances warrant, we will change guidelines," he said.

The school posted a set of those guidelines earlier this summer. The list lays out scenarios that would trigger a "discussion" about "closure, partial closure or on-campus reduction," but does not draw hard lines for those actions. At the top of the list, "Student death." Other triggers include overwhelming cluster outbreaks, as well as test positivity exceeding the predicted model. Death of faculty or staff is not mentioned.

Bird said the school has established contact-tracing protocols, and has partnered with the city of Austin to provide self-isolation facilities away from residence halls for students who test positive or develop symptoms.

"It's above and beyond anything you see in other communities in the U.S.," Bird said, pointing out that no other community in the country has taken a proactive approach to testing. "The goal is to create an environment where our students are actually safer than in other environments."

A member of UT's custodial staff, speaking on the condition of anonymity, explained that colleagues were concerned the school didn't realize the full social impact of reopening.

"People here work multiple jobs, use public transportation and visit essential businesses to get supplies for our families," the staff member said. One colleague who got infected in May had been commuting to work with a friend.

A second-grader in Georgia tested positive on Wednesday, the first day of school in that state. Symptomatic teachers have reportedly tested positive at North Paulding High School, about an hour outside Atlanta, which reopened despite an outbreak among its football team.

Asked why UT felt that reopening amid these circumstances was a responsible and ethical decision, especially given that COVID-related death was no longer a hypothetical among the school's community, Bird replied, "We wouldn't be pursuing this approach if we didn't believe it wasn't responsible."

"We all have the same questions," he said. "This isn't just UT, or just schools. It comes down to what we should do as a society."

Art Markman, a professor in the Department of Psychology and head of the school's Academic Working Group for fall planning, offered a statement on the moral calculation of opening the university amid the threat.

"About 50,000 students are seeking to continue their studies at UT this fall, taking most of their classes remotely, and we believe supporting their decision under the safest conditions possible is the right and ethical thing to do," the statement reads.

"For many of our students, the environment they would be in back home would not necessarily be as safe, and they would not have access to broadband and study spaces that would enable them to continue their studies successfully. We have a responsibility to be aware not just of what may happen based on the actions we take but also to bear in mind the consequences of our inaction," he added.

As of Wednesday, the U.S. has reported more than 157,600 deaths and 4.8 million cases, according to the Johns Hopkins University Coronavirus Resource Center.