Many states have travel quarantines. Few are being enforced

The porous borders between U.S. states have led to a patchwork system of “enforcement” 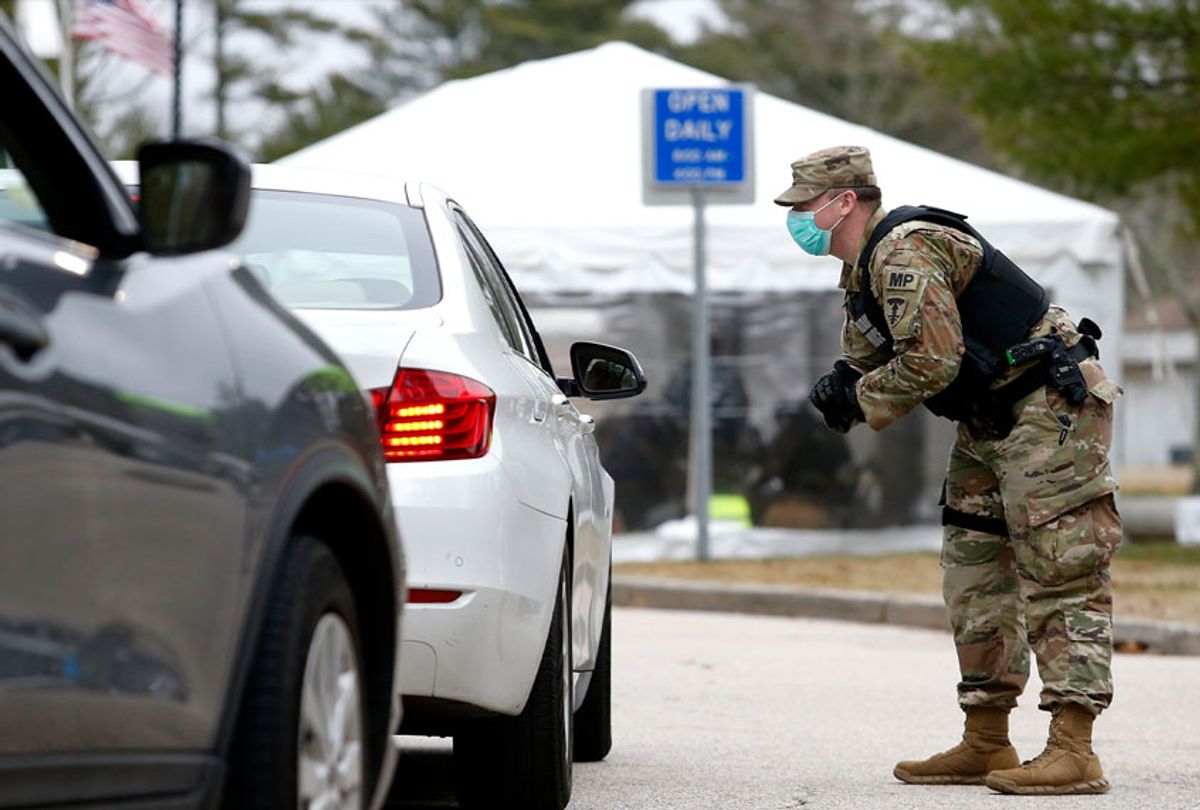 Members of the National Guard talk to out of state drivers at a checkpoint set up to hand out information to those coming in from out of state about self-quarantining for 14 days to try to reduce the spread of coronavirus on March 30, 2020 in Hope Valley, RI. Out of state drivers were directed to pull over on I-95 into a rest area between Exits 2 and 3 to speak to the National Guard. (Jessica Rinaldi/The Boston Globe via Getty Images)
--

As a federation of many different states, the borders between the U.S. have always been somewhat porous; rarely do states have any kind of entry checkpoint outside of those for agriculture or commercial freight. So the announcement that New York City intends to set up quarantine "checkpoints" at "key entry points" along main bridges and tunnels seems like a new precedent for public health and safety amid the pandemic.

While many states have formally limited travel between other states, there has been little in the way of intra-state enforcement — until recently. That raises the question as to what travel quarantines really mean, which states are actually enforcing them, and how.

In the case of New York, the city intends to screen travelers coming in from 35 states with coronavirus outbreaks.

"Travelers coming in from those states will be given information about the quarantine, they will be reminded that it is required, not optional," New York City Mayor Bill de Blasio said in an announcement. "They'll be reminded that failure to quarantine is a violation of state law and it comes with serious penalties."

Specifically, according to the new order, drivers from one of the 35 states that meet New York's quarantine requirements have to fill out a form asking for personal contact information and an itinerary. Those who violate their required 14-day quarantine can be subject to a fine of up to $10,000 depending on how many times the quarantine is violated. A refusal to fill out the form will result in a $2,000 penalty. The checkpoints began on Wednesday. On Thursday, according to Gothamist, over 200 cars were stopped.

But unlike countries like New Zealand who have been able to slow the spread of the coronavirus with the help of government isolation centers (designated places for travelers to quarantine) these American states' mandates operate on a combination of the honor system and the chance of a person individually getting "caught." Or in some cases, like in New York City, quarantine rules won't be enforced beyond the checkpoints, as reported by The New York Times.

So are these quarantine rules effectively meaningless? Not in every jurisdiction.

In the U.S., Hawaii has one of the strictest and most enforced travel quarantine mandates since the pandemic began. Since March, travelers— both residents and visitors — have been mandated to do a 14-day self-quarantine. According to a July 17th report, 182 people have been arrested by state or county law enforcement officers for violating quarantine rules since the mandated quarantine began. However, this week the governor tightened restrictions and announced that a two-week inter-island travel quarantine will be in place starting August 11, which had previously been lifted, as coronavirus cases are increasing. The island state briefly appeared to have control over the virus compared to other states, which experts attributed in part to its geography. But even with enforced travel quarantines, a second wave is still underway.

In Alaska, travelers have been given a choice throughout the pandemic: self-quarantine or get tested for COVID-19. But starting August 11, nonresidents will be required to be tested before they arrive in Alaska. If their results are still pending, visitors have to upload proof of the test and self-quarantine until the results are in.

Yet after leaving the airport, the self-quarantine relies on voluntary cooperation, not enforcement. The same goes for the city of Chicago, regarding enforcement of a travel quarantine. The Chicago Tribune said "enforcement of the order so far has been nonexistent, save for some billboards and signs that [Mayor Lori] Lightfoot said were intended to 'educate' people to comply."

In June, New Zealand prime minister Jacinda Adern announced that the country had beat coronavirus. The World Health Organization (WHO) attributes New Zealand's success to the speed and severity of their lockdown in the beginning of pandemic, but also their sustained vigilance which includes isolation centers managed by the military. While they have contributed to New Zealand's success story, there have been reports that they are under stress and far from perfect. In July, a man reportedly escaped to go to a liquor store. But as reported by Time magazine, New Zealand's strategy is unlikely to be replicated in other countries partly because of the high level of trust its citizens have in the government.

Indeed, opinions on the effectiveness of mandated travel quarantines vary based on concerns. In the U.S., there is very low public trust in government which is why some groups have spoken out against mandated travel quarantines. In New York, the privacy group Surveillance Technology Oversight Project (S.T.O.P.) issued a statement condemning de Blasio's new order, raising concerns that the new order comes at a time when New Yorkers have been demanding to defund the police.

"This is a ludicrous, invasive, and deeply dangerous plan," Surveillance Technology Oversight Project Executive Director Albert Fox Cahn said in statement. "Rather than addressing the city's backlog in testing capacity and struggling contact tracing program, the Mayor is transforming this pandemic into a policing issue."

Notably, the Centers for Disease Control and Prevention endorses state-mandated travel quarantines. "To control the spread of disease within their borders, states have laws to enforce the use of isolation and quarantine," the federal agency said.

Researchers say that China's success in controlling coronavirus was due to a mix of "early detection and isolation of cases," which was more effective "than travel restrictions and contact reductions."

However, as John Barry, author of "The Great Influenza: The Story of the Deadliest Pandemic in History,' wrote: "For interventions to work, people have to comply and they have to sustain that compliance; most of that depends on voluntary efforts and individual behavior."

Certainly, if everyone complied with the mandated travel quarantines, they would be more effective. But for now, they have many people wondering if the government should be doubling down on enforcement, or rather focusing on other strategies to stop the spread of the virus.