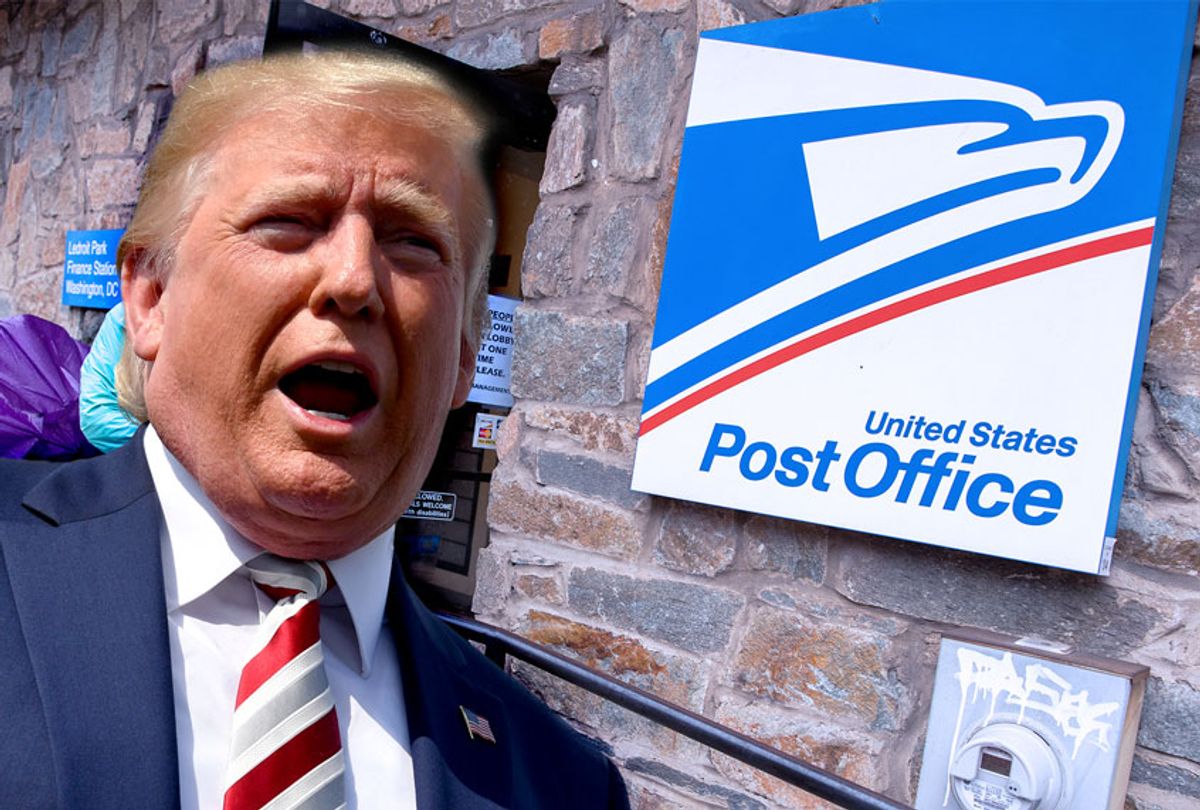 OK, we've managed to find ourselves in another governmental tempest in a substantial teacup: Donald Trump is working overtime to undercut the U.S. Postal Service just as he is railing on mail ballots.

It's a pairing that just makes no sense.

As the Los Angeles Times editorialized this week: "Attacking the U.S. Postal Service before an election is something a terrorist would do."

Or, more politely, perhaps, if there is something wrong with the Post Office that will keep it from working most efficiently in an election that clearly will be dependent on mailed ballots, do something to make it better, not worse.

Now we're waiting to see only how much worse since it has become clear that "mail ballots" is the vehicle that Trump will be using to challenge the election results.

This week, Trump claimed that he has the authority to issue an executive order to halt the use of mail-in ballots, whose increasing use, he argues, could increase election fraud and uncertainty. As threatened, his campaign sued Nevada, whose legislature just authorized sending out mail ballot forms to all voters in an effort to provide a safe method for voting in a pandemic. The suit claims that the state is violating the Constitution by promising to count votes literally after Election Day, the postmark date for receiving mailed, completed ballots – a pretty weak argument in my view.

Of course, it is unclear what he could do to curtail the distribution of ballots, which is controlled by states, including those with Republican governors. "I have the right to do it," Trump told reporters at the White House without explaining how.

Nearly all election procedures are governed on a state basis, with the remainder set by Congress or enshrined in the Constitution. There is no precedent or apparent authority for Trump to try to curtail the use of mail-in ballots by executive order.

The statement came days after he threatened, and then back down from, a delay in the November election for concern that Republicans will suffer more if more people vote.

Actually, Trump's campaign against mail-in voting may backfire, according to Republican political organizers who are concerned about losing too much of their own party vote.

But in the meantime, perhaps Trump is unaware that the pandemic has prompted a huge switch in mail altogether:  Delivery of business-oriented mail is way down, but deliveries of on-line purchases is way up. In an economy which is changing to more and more digital business, the very thing that wrongly launched Trump's ire – fees charged for delivery of on-line purchases is actually increasing.

As people are stuck at home, they are buying more online and also getting medications, checks and other necessaries through the mail.

Trump repeatedly has attacked fees charged for delivery as inadequate, though that statement, literally untrue, is believed to be an expression of Trump's anger towards Jeff Bezos, head of Amazon and owner of The Washington Post, whose news coverage Trump detests. In truth, such fees are the biggest source of revenue for the Postal Service.

As a result, he named Louis DeJoy, a Republican fundraiser to take over the top job at the Postal Service in June. DeJoy has taken several moves that actually are slowing mail delivery, including eliminates overtime for hundreds of thousands of postal workers and orders that mail be kept until the next day if postal distribution centers are running late.

In other words, Trump's administration is worsening the situation just as the pandemic is prompting vast use of mailed ballots.

Enter Trump's railing against mail ballots, though he reversed himself about Florida, where he votes remotely and where he says procedures are fine. Trump sees a difference between absentee ballots, requested by the voter, and mailed ballots, which are reviewed upon submission to guarantee validity.  Trump has called remote voting options the "biggest risk" to his reelection. His campaign and the Republican Party have sued to combat the practice, which was once a significant advantage for the GOP.

There is no evidence of widespread voter fraud through mail-in voting and the states that use it exclusively say they have necessary safeguards in place to ensure that a hostile foreign actor doesn't disrupt the vote. Election security experts say voter fraud is rare in all forms of balloting, including by mail.

Indeed, the biggest problem to date is a lack of speed in counting the ballots. Some states count as they receive ballots, others only after the designated election day. So, "fraud" as seen by Trump seems to mean "delayed results" in real life.

Politico reports that private polling showed that Republican voters have become overwhelmingly concerned about mail balloting. A potentially decisive slice of Trump's battleground-state base — 15% of Trump voters in Florida, 12% in Pennsylvania and 10% in Michigan — said that getting a ballot in the mail would make them less likely to vote in November. The same is not true for Democrats polled. Politico said the poll was part of a flurry of research trying to gauge swing-state voter attitudes as the coronavirus accelerates use of mail ballots.

Meanwhile the House Oversight Committee has asked the new postmaster general to appear at a September hearing to examine operational changes at the Postal Service that are causing delays in mail deliveries across the country.

Postal Service officials have warned they will run out of money by the end of September. The House voted more money for the Postal Service, as part of the overall coronavirus stimulus aid bill, which the Senate and Republicans have yet to embrace. Congress has approved a $10 billion line of credit for the Postal Service, but it remains unused amid restrictions imposed by the Trump administration. The bipartisan leadership met with DeJoy yesterday to see if any of this makes sense.

If you wanted to screw up this election, this seems a pretty good plan.