When English kings tried to push for absolute monarchy, they failed. Now Trump and Barr want to do it their way 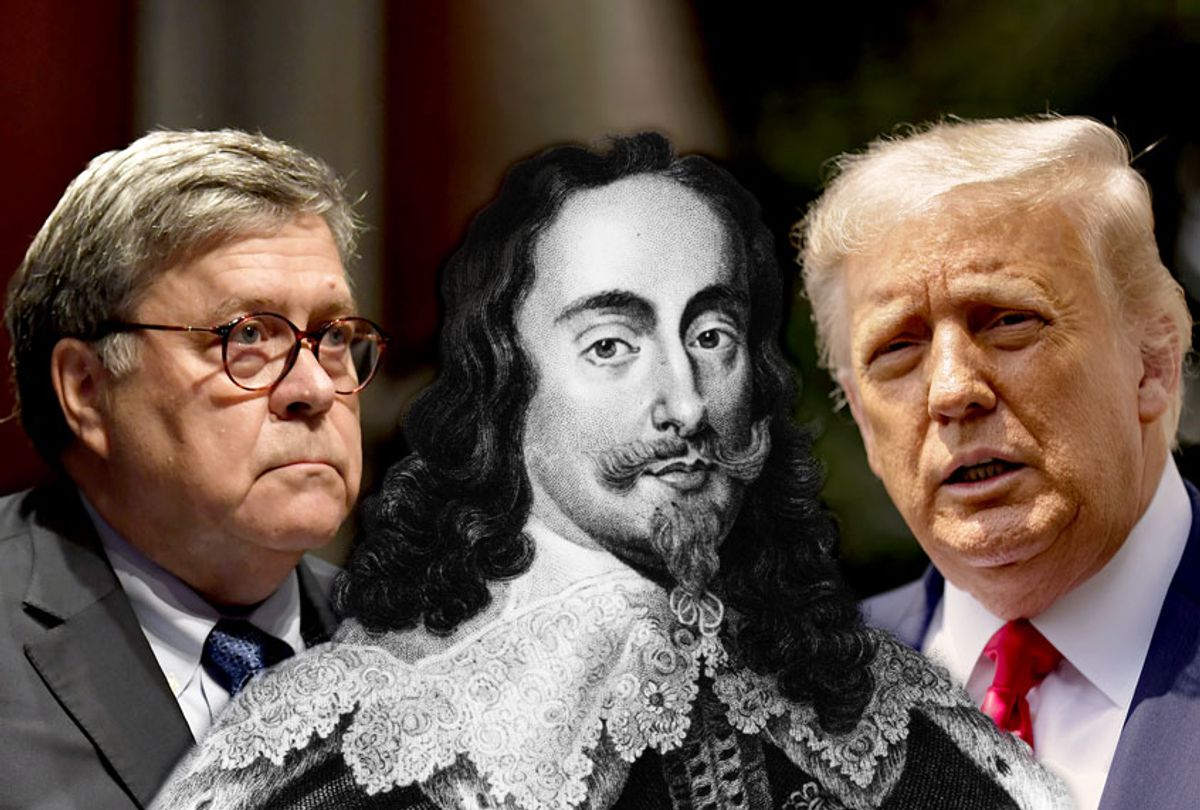 With each passing day, it seems, the Trump administration seems intent on replaying the leadup to the English Revolution.

Like King James I of England (aka James VI of Scotland), Trump believes that he, to quote James' tract of 1598, "The True Law of Free Monarchies," "is above the law," accountable only to God. He asserted in a July, 2019 speech that Article II of the Constitution means "I have to the right to do whatever I want as president." Like James' son, Charles I, who ruled England for 11 years without a parliament, Trump is increasingly governing through executive orders rather than making laws with the House and Senate.

Attorney General William Barr, Trump's legal theorist, has put forward the notion that the president's powers are "undivided and absolute." Even more astonishing, Barr wrote in his June 2018 unsolicited memo to the Trump administration that "The Constitution itself places no limit on the president's authority to act on matters which concern him or his own conduct  . . ." Both Barr and Trump believe that the chief executive's prerogatives are not to be questioned. It is "presumption and high contempt, "James told Parliament in 1616, "to dispute what the king may do." Barr said pretty much the same thing in his speech to the Federalist Society in November 2019, arguing that the "presidential power has become smothered by the encroachments of the other branches."

The response to this view of untrammeled presidential power is about the same as Satan's in Milton's "Paradise Lost" after God suddenly alters Heaven's political structure: "strange point and new! / Doctrine which we would know when learned." Over and over again, we hear the phrase, "Trump is not a king." Meaning that does not reign supreme, and the Constitution does not give him the right to do whatever he wants.

But saying "Trump is not a king" misrepresents the nature of English monarchy and understates just how radically Trump and his enablers are trying to redefine the American polity.  Barr's notion that the founders would have approved of an executive with nearly unlimited authority is not only wrong in contemporary terms, it's profoundly ahistorical. To understand that, we need to briefly trace the history of the Ancient Constitution, the unwritten rules governing the limits on monarchic power in England, as these values traveled across the Atlantic and formed the basis for how the colonists understood authority, and why they felt justified in rebelling against King George III.

There are in fact two kinds of monarchy: absolute, in which the monarch is above the law, and limited or mixed, in which the monarch's powers are limited by convention. England's monarchy has always been a limited or mixed monarchy. It was never absolute, and the one English monarch who tried to rule as if he were an absolute monarch — Charles I — literally lost his head as a result.

Let me give a few examples.

In 1385, Parliament had enough of Richard II and his shenanigans, so they decided to impeach him because he was a "tyrant over his subjects and worthy to be deposed." To justify the deposition, Henry, Duke of Lancaster, soon to become Henry IV, gave the Commons a list of Richard's crimes, the most important being #16: "he said that the laws of the realm were in his head . . . by reason of which fantastical opinion, he destroyed noble men and impoverished the poor commons." (I'm quoting from Hall's "Chronicle," widely available and used by Shakespeare for his history plays).

About a century later, England's chief justice, Sir John Fortescue, wrote an immensely popular and influential tract, "In Praise of the Laws of England," declaring that, the monarch "is not able to change the laws of his kingdom at pleasure." Laws can be altered, and taxes imposed, only "with the assent of his subjects." Meaning, only with Parliament's approval.

Not that monarchs didn't try to get around these rules. In 1508, a very young Henry VIII tried to change the coronation oath. In place of swearing to uphold "the laws and customs of the realm . . . which the folk and people have made and chosen," he wanted to add the following proviso: he would uphold only those laws "not prejudicial to his crown and imperial jurisdiction." But he didn't succeed, and had to swear to the original oath, the one limiting monarchic power.

While some political theorists on the Continent believed in absolutism, nobody in 16th-century England held that the monarch had unlimited power. After being slapped down, Henry VIII always worked with Parliament. Queen Elizabeth I, for all her self-regard, never said that she was an absolute monarch.  James did, but while he talked the absolutist talk, he never tried to put those ideas into practice. That fell to his son, Charles, and it did not work out well for him. He was executed in 1649, leading to the short-lived English Commonwealth under Oliver Cromwell, itself overthrown 11 years later. But after the Restoration, the English crown never made the sorts of claims for itself that Charles did. The Ancient Constitution, not absolutism, ruled.

These assumptions travelled across the Atlantic with the colonists, and they formed the bedrock for the American Revolution.

In 1680, for example, the English writer Henry Care published "English Liberties: Or, the Free-born Subject's Inheritance." Care began by declaring that the English monarchy is "the best in the World" because the English enjoy "a most excellently mixed or qualified monarchy." The monarch, to be sure, has his powers and prerogatives. But so do the nobility, whose privileges act as a "screen to Majesty, and a refreshing shade to their inferiors." So does the commonality or the people, guarded "by the Fence of law, as renders them free men, not slaves." Quoting Fortescue, Care observes that in England, the phrase, "what pleases the prince has the force of law," does not apply. Instead, it's the opposite. In England, monarchs swear an oath "to observe and cause the laws to be kept," not to change them at will or, as Henry VIII tried, to observe only those laws that do not infringe on his authority.

Care's book was reprinted five times, indicating its popularity. One reprint, in 1721, was published by James Franklin, Benjamin's brother, and went through at least six editions. As Nick Bunker writes in "Young Benjamin Franklin," Care's volume "amounted to a source book of ideas that [Benjamin Franklin] would draw upon until the 1770s, when Americans replaced it with better treatises of their own." Treatises that would build on the Ancient Constitution.

Returning to the present, Trump and Barr's notion of a president who can do what he wants, immune from all investigation, and can govern by fiat, is profoundly ahistorical and wrong. It's inconceivable that the Founders would have given the president powers that not even the English monarch enjoyed.

Which is not to say that Trump will not try, or that he might not succeed. UC Berkeley law professor John Yoo has proposed that the Supreme Court's DACA decision allows Trump the latitude to do whatever he wants through executive order: Presidents "can now stop enforcing laws they dislike, hand out permits or benefits that run contrary to acts of Congress and prevent their successors from repealing their policies for several years." Trump appears to have tested this thesis this past weekend, signing an incoherent series of executive orders and memoranda intended to go around Congress on unemployment benefits, payroll tax suspension and other coronavirus relief measures.

It's not yet clear whether Trump will succeed where Charles I failed. The coming election will determine whether the United States remains loyal to its roots in the Ancient Constitution, or whether the fundamental nature of this republic will move toward something much more authoritarian and absolutist. Will "what pleases the president have the force of law"? The answer depends on who wins in November.

Peter C. Herman is professor of English literature at San Diego State University. He has published on Shakespeare, Milton and the literature of terrorism. His most recent book is "Unspeakable: Literature and Terrorism from the Gunpowder Plot to 9/11" (Routledge, 2020).