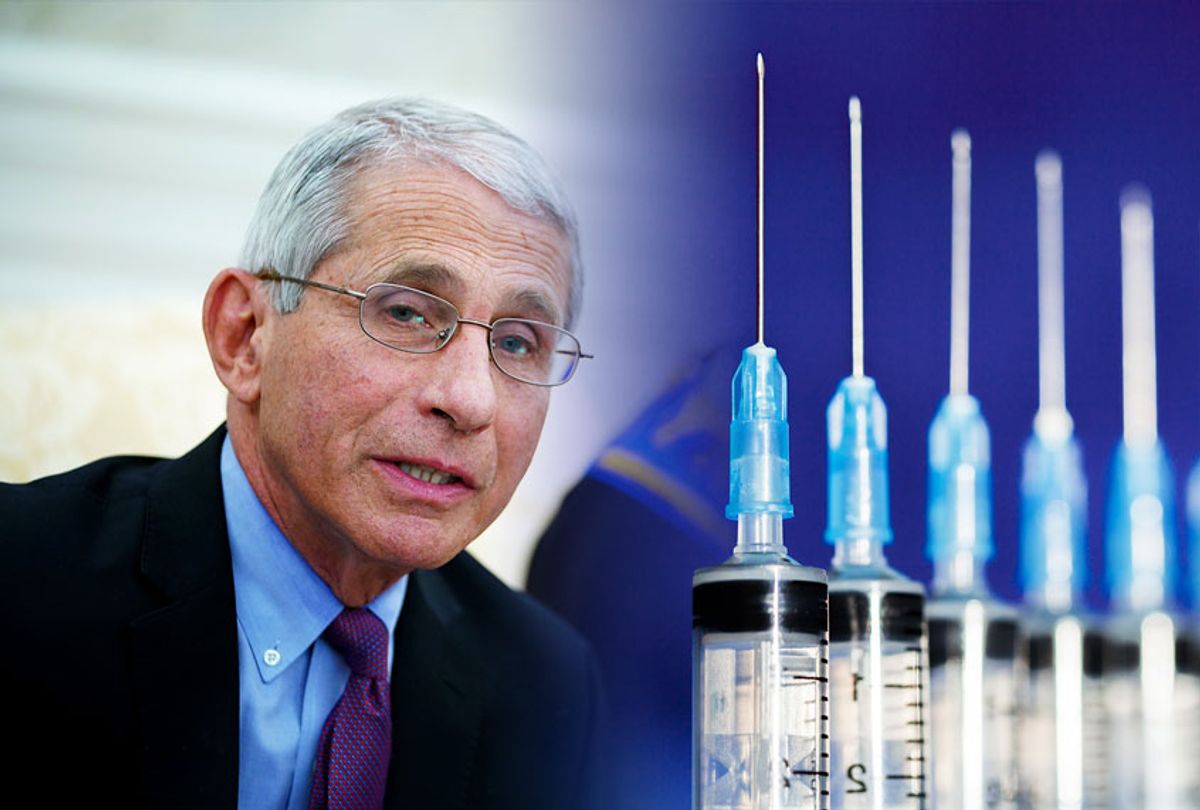 With millions of lives on the line, researchers have been working at an unprecedented pace to develop a COVID-19 vaccine.

But that speed — and some widely touted breakthroughs — belie the enormous complexity and potential risks involved. Researchers have an incomplete understanding of the coronavirus and are using technology that's largely unproven.

Among many worries: A handful of studies on COVID-19 survivors suggest that antibodies — key immune system proteins that fight infection — begin to disappear within months. That's led scientists to worry that the protection provided by vaccines could fade quickly as well. Some even question whether vaccines will really end the pandemic. If vaccines produce limited protection against infection, experts note, people will need to continue wearing masks and social distancing even after vaccines roll out.

Yet in an interview with KHN, the country's top infectious disease expert, Dr. Anthony Fauci, said he's "cautiously optimistic" that researchers will overcome such obstacles.

"We know the body can make an adequate response against this virus" after two shots of a vaccine being tested, Fauci said. "There's no reason to believe that we won't be able to develop a vaccine against it."

Because early-stage trials began just a few months ago, doctors don't know how long antibodies in vaccinated people will last, he said.

Scientists will get answers to some of their questions from the country's first large-scale COVID-19 vaccine trial, launched last week by the National Institutes of Health and Moderna at 89 locations around the country.

"Once we get a protective response, we will see how long it lasts," Fauci said.

"If we don't get as long a response as we want, we can always give a booster shot."

The leading vaccine candidates are based on new approaches that have never resulted in a licensed vaccine. Moderna, a relatively young company, has yet to produce any approved vaccines.

"Even more so than usual, as we create vaccines, we're sailing in uncharted water," said Dr. William Schaffner, a professor at the Vanderbilt University School of Medicine.

If approved, a COVID vaccine created by researchers at Oxford University and drugmaker AstraZeneca would be the first licensed vaccine to use a virus that causes colds in chimpanzees but doesn't sicken people. Scientists use the cold virus to deliver key elements of the vaccine into a patient's body. In this case, the virus delivers the gene that instructs the cell to make the spike protein, which helps the novel coronavirus enter cells.

Early studies show that the Oxford vaccine stimulates the immune system as intended. If the vaccine is successful, these antibodies and other immune cells will recognize and neutralize the spike protein if they encounter it again, protecting people from disease.

Two other candidates — a vaccine from Moderna and another from Pfizer and BioNTech, a German company — were also developed with novel methods. They use genetic material from the coronavirus called messenger RNA, or mRNA.

Moderna officials have said they were able to produce the COVID-19 vaccine so rapidly because they had developed experimental vaccines against two other lethal coronaviruses — those that cause SARS and MERS — which are closely related to the COVID-19 virus.

When the pandemic emerged, Moderna tweaked those vaccines to target COVID-19, Fauci told KHN. Fauci's team contacted the company the day after China made the virus's genome public.

Two months later, Moderna's vaccine was ready for a trial because "98% of the scientific work had been done," Schaffner said. "They went back to these scientific methods and adapted them very quickly. That saves years of work."

But there is a potential risk in relying so heavily on unproven techniques: New technology can sometimes cause unforeseen problems or side effects, said Dr. Amesh Adalja, a senior scholar at the Johns Hopkins Center for Health Security.

But some scientists say this uniform approach could also leave us vulnerable.

Ideally, scientists should diversify the portfolio of vaccines, in case targeting the spike protein doesn't work as well as researchers hope, Adalja said. Developing a vaccine that targets other key proteins might help scientists to hedge their bets.

Researchers around the world are working on more than 165 vaccines; more than two dozen are already being tested in people. Early human studies focus on safety and finding the best dose. Later clinical trials are larger and measure a vaccine's effectiveness by comparing the outcomes of volunteers who receive the vaccine with those of people given a placebo.

Fauci said he's reassured by early studies that showed the Moderna vaccine to be safe. Although some volunteers developed fevers and headaches after vaccination, these side effects were no worse than those caused by other licensed vaccines.

"That's not a showstopper at all," he said.

Some of COVID-19's most important mysteries involve the immune system, said Dr. Paul Offit, director of the Vaccine Education Center at Children's Hospital of Philadelphia.

Offit said he's mystified by the fact that a small fraction of people with COVID-19 don't make any antibodies against the virus. He knows of no other virus that does this.

"We're only seven months into this and we've had a lot of surprises," said Offit, a member of a National Institutes of Health effort to develop vaccines and drugs to treat COVID-19. "This virus does things that no other virus does."

This is not like preventing measles. "It's easier to create a vaccine for diseases that confer long-term immunity," Offit said. People never catch measles more than once. The two-dose measles vaccine stimulates immunity, protecting 97% of people for life, Offit said.

It's also not like strep throat or gonorrhea, which people can catch multiple times because the bacteria that cause them don't ignite lasting immunity. "That's why we don't have a vaccine for them," he said.

Some coronaviruses cause more serious symptoms than others. Coronaviruses that cause the common cold don't stimulate lasting antibodies, which is one reason people can catch colds repeatedly, Schaffner said.

People with severe symptoms from COVID-19 tend to have higher antibody levels than those with milder cases.

Some people fail to generate antibodies because they have compromised immune systems, said Mark Sangster, a research professor at the University of Rochester Medical Center.

Even when people do generate antibodies against the novel coronavirus, studies suggest the antibodies may not last long.

In a recent New England Journal of Medicine report on COVID-19 survivors, antibody levels dropped rapidly over three months, at a rate that could leave them without any antibodies within one year. Those findings echo the results of a June report in Nature Medicine that found antibody levels began to fall two to three months after infection.

Such reports have worried some scientists, who fear that antibodies will decline just as rapidly among people vaccinated against COVID-19.

"One wants a vaccine that lasts longer than two months," Schaffner said.

Other antibody research has been more encouraging.

A July paper found that COVID-19 infection "induces robust, neutralizing antibody responses that are stable for at least three months." Antibodies typically rise during an infection, then fall again as the immune system returns to normal, said Florian Krammer, co-author of the study, which was published online before undergoing peer review.

"What we found looks like a normal antibody response to a viral infection," said Krammer, a professor of microbiology at the Icahn School of Medicine at Mount Sinai in New York.

Early studies of the Moderna vaccine suggest people mount a strong immune response after two doses, Fauci said. But because the earliest trials began just a few months ago, doctors don't yet know how long antibodies in vaccinated people will last.

Conflicting evidence on antibodies "shouldn't interfere with efforts to develop a safe and effective vaccine," added Fauci, noting he's encouraged by the results of early clinical trials. "The durability of the vaccine may be quite good."

Dr. Michael Watson, who is developing Moderna's COVID-19 vaccine, said he hopes vaccinated people will have a stronger immune response than those sickened by the coronavirus. He said it's possible the virus not only infects cells, but also dampens the immune system, suppressing antibody response.

A vaccine that contains only one part of the novel coronavirus — a protein that allows it to enter cells — might be able to stimulate antibody production without suppressing the immune response, Watson said. Only large clinical studies will show whether this is the case.

Yet there's more to the immune system than antibodies.

The body is also protected by memory T-cells, which can recognize viral threats to stimulate the production of antibodies even after many years, said Dr. Jeffrey Klausner, professor of infectious diseases at UCLA. Memory T-cells can stimulate B-cells to make antibodies, while instructing other immune system players to fight the virus in different ways.

"The T-cells are like the conductors of a symphony," Klausner said. "These multiple, complex arms of the immune system work together like a symphony to control infection."

New studies suggest people who survive COVID-19 develop both memory T-cells and B-cells. One paper even documented memory T-cells —which can instruct other cells to make antibodies — in survivors of the 2003 SARS pandemic.

Fauci said it's too early to know what sort of role T-cells will play in defending against the novel coronavirus.

Researchers will get more definitive answers about vaccine-induced immunity to COVID-19 in coming months, after they complete large, rigorous trials of tens of thousands of volunteers, Offit said. Vaccine makers have said they plan to study their products' safety and effectiveness even after approval, to measure long-term efficacy as well to detect rare side effects that don't appear in smaller, shorter studies.

In addition to Moderna's trial, AstraZeneca said results from an ongoing study of 50,000 volunteers should be available this fall.

With so many vaccines in development, Adalja said, it's difficult to know which one will prove the safest and most effective.

"The first vaccines may not be the ultimate vaccine that everybody uses," he said.

And some vaccines may work better in certain populations than others, Offit said. For example, studies may find that one shot works particularly well in children, while another better protects older adults. "There is definitely a lot to learn," he said.

Ideally, doctors would like all vaccines to be as successful as the measles shot, Offit said. But a COVID-19 vaccine could more closely resemble flu shots and rotavirus vaccines, which don't prevent all infections but dramatically reduce the risks of hospitalization and death. Although some people who receive a flu shot still get influenza, their infections tend to be much milder than those of people who aren't vaccinated.

"You'd like to have a vaccine that protects against severe disease, and it likely will," Offit said. "But people might still get mild infections and still shed the virus and still spread it" even after being vaccinated.