Sam Harris and Donald Trump: They're completely different ... yet very much alike 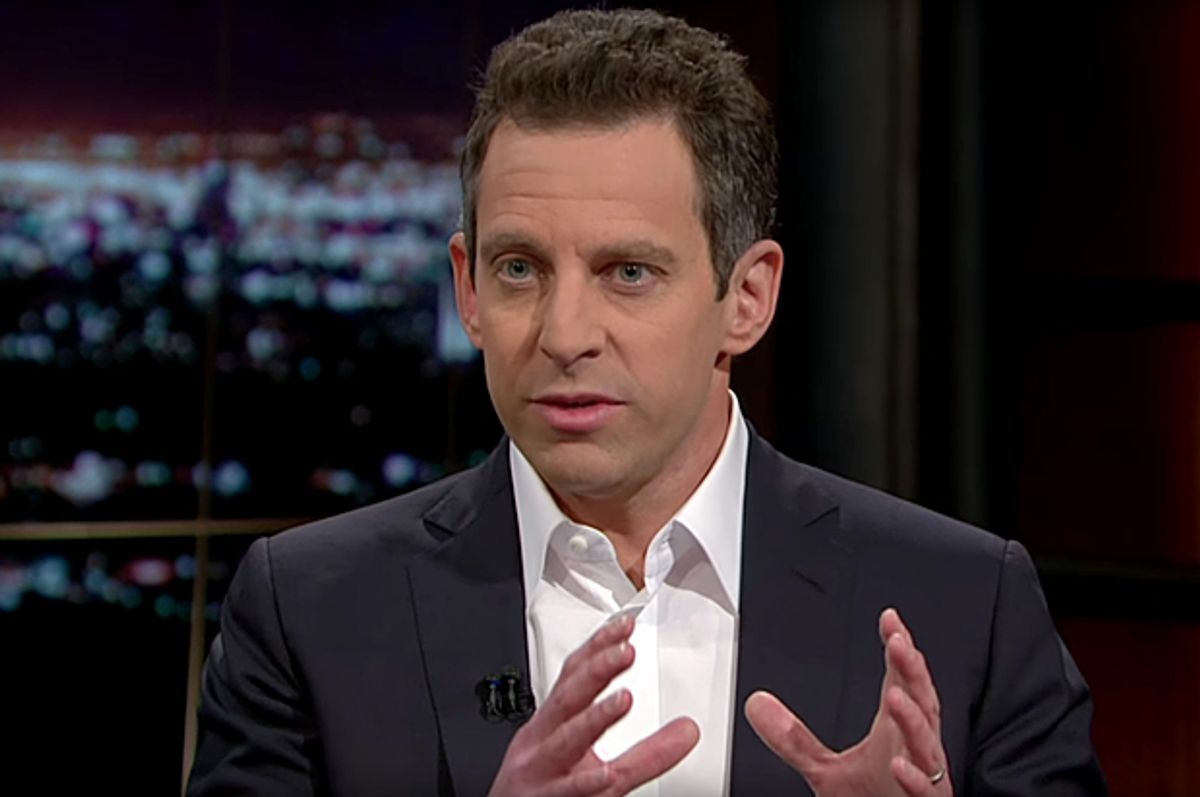 Sam Harris is a lot like Donald Trump. To many readers, this may sound either obviously false or trivially true — after all, everything is like everything else in at least some way. But what I mean is quite substantive: There are important ways in which the strategy that Harris uses to communicate with his audience is strikingly similar to Trump's. This should worry us, because both speak with unwarranted confidence about topics they don't understand and have sizable audiences that are generally inclined not to question the wisdom and omniscience of their chosen leaders.

For Trump, Twitter and his rallies are much preferred over media appearances, except with Fox News allies like Sean Hannity and the good people of "Fox & Friends." The reason is obvious: Trump wants to communicate directly with his target audience, without his message being altered, modified, filtered or fact-checked by the so-called mainstream media. This enables him to say whatever he wants with impunity. He can lie, mislead, opine, spread misinformation and propaganda all he wants without having to be held accountable, or at least not in a way that exposes him to the truth.

Sam Harris began his career, metaphorically speaking, by winning the lottery: He wrote a mediocre diatribe against Islam (without expertise on either Islam or Islamic terrorism) that was published at exactly the right time — three years after the 9/11 attacks and one year after the U.S.-led invasion of Iraq, now considered to be perhaps the single greatest foreign policy blunder in our country's history. After this, he participated in numerous public debates with religious clowns and published articles in outlets like the Washington Times, one of which, from 2004, made the following incendiary claim: "It is time we admitted that we are not at war with 'terrorism.' We are at war with Islam." He's also published a (very) small handful of scholarly articles in peer-reviewed papers.

But over time, Harris withdrew from expressing his opinions through platforms designed to ensure a minimum level of intellectual integrity. He began blogging and then started an enormously popular podcast, his principal medium for the past seven years. He stopped publishing peer-reviewed research papers. He opted not to submit articles to media outlets that imposed some editorial control over what they publish. Instead, he created a small media empire that enabled him to say whatever he wants, whether or not the message is misleading, the claims are factually erroneous, the reasoning is fallacious and so on. In other words, he figured out a way to bypass intellectual accountability — to opine as much as he wants about topics he doesn't understand without peer-review, editorial oversight or other quality-control measures.

Like Trump, Harris seems wholly uninterested in getting things right. He claims to care about intellectual honesty and good scholarship, yet he consistently spouts misinformation on his podcast that could easily be corrected if only he were to engage — sincerely, and in good faith — those who disagree with him (very often actual experts on the topics of racism, feminism, social justice and so on). Indeed, so far as I can tell, Harris has become one of the greatest sources of misinformation on social justice issues in the United States today. His contribution to scientific racism — his boosting the visibility of claims like Black people are almost certainly dumber than white people for genetic reasons — will no doubt be one of his greatest, and darkest, legacies.

Consider this anecdote from a few years ago. I was in Sweden for a two-month-long workshop. During lunch one day I was speaking to a professor at the local university and the uncomfortable topic of race and IQ came up. He told me that he has come to embrace (in his words) the "racist view," according to which white people are intellectually superior to Black people because of evolution. He further told me that it is only once one accepts this view that white folks can be genuinely empathetic toward Black people. That is, by recognizing that "they can't help it," we can take on the burden of helping them out.

Over the course of an excruciating two hours (in every moment of which I wanted to defenestrate myself), I explained the problems with "IQ" as a metric of intelligence and went over some of the data about how horrifically widespread heavy-metal poisoning and malnutrition is in poorer regions of the world. By the very end, he told me that I had nearly talked him out of the "racist view."

The point here is this: Literally the first thing I asked when he explained his "racist view" was, "Why do you think that?" And his response was: "Well, I mean, listen to Sam Harris. Listen to his interview with Charles Murray. Listen to the points that he made in his podcast interview with Josh Zepps." Indeed, so far as I know, the Zepps podcast was Harris's most explicit statement that affirmed his racist convictions. To quote him in full:

And as bad luck would have it, but as you absolutely predict on the basis of just sheer biology, different populations of people, different racial groups, different ethnicities, different groups of people who have been historically isolated from one another geographically, test differently in terms of their average on this measure of cognitive function. So if you're gonna give the Japanese and the Ashkenazi Jews and African Americans and Hawaiians … you're gonna take populations who differ genetically — and we know they differ genetically, that's not debatable — and you give them IQ tests, it would be a miracle if every single population had the exact same mean IQ. And African Americans come out about a standard deviation lower than white Americans. A standard deviation for IQ is about 15 points. So, if it's normed to the general population, predominantly white population for an average of 100, the average in the African American community has been around 85.

There is simply no other interpretation of this than "Black people are genetically dumber." What's worse is that Harris presents this as if it's the unavoidable, obviously true inference from the indisputable facts. This is where the Trumpian strategy of avoiding peer-review, editorial oversight, and quality control comes into the picture with force: There are profoundly strong reasons for rejecting all of this. Yet Harris' adoring audience of mostly white men (including a lot of Trump supporters) would never know this listening to him. He's done everything possible not to foster debate but to edit out — to cancel, if you will — dissenting voices. Again, often these dissenting voices come from scholars with actual expertise on the relevant topics.

This is nothing short of blatant anti-intellectualism. Even with respect to topics that Harris supposedly knows about, such as terrorism, philosophy and neuroscience, his ideas have been almost entirely rejected by academics. His understanding of the root causes of Islamic terrorism clashes violently with the best scholarship on the topic, his book on the "moral landscape" led Patricia Churchland (one of the more notable contemporary philosophers) to say "I think Sam is just a child when it comes addressing morality," and his understanding of history — both in the U.S. and the Middle East — is deeply impoverished. But it gets so much worse when Harris starts talking about Black Lives Matter, gender-neutral pronouns, white nationalism and so on. For those of us who actually know something about these topics (or who are willing to defer to people who've actually studied the issues), Harris' ramblings sound like a creationist droning on about irreducible complexity or how evolution is false because monkeys still exist.

But when those listening to Harris' podcast don't know any better, they become susceptible to misinformation and propaganda. I've interacted with so many people who've regurgitated an idea or argument from Harris that misrepresents a philosophical position, activist cause or individual's position. Often these people unwittingly beat down a straw man and then drop the mic while channeling the same intellectual overconfidence that Harris manifests with cheap rhetorical tricks like saying "We have to be able to speak honestly about this issue" whenever someone disagrees with him, as if those with different views are all dishonest (a bad-faith, manipulative strategy).

I worry greatly about the current zeitgeist of anti-intellectualism in our society, and for this reason I worry greatly about Harris' influence. He is no epistemic role model, but so long as he continues to shield himself from peer review, editorial oversight  or some other quality-control mechanism, his audience will continue to absorb and propagate misinformation on some of the most pressing social issues of our day.