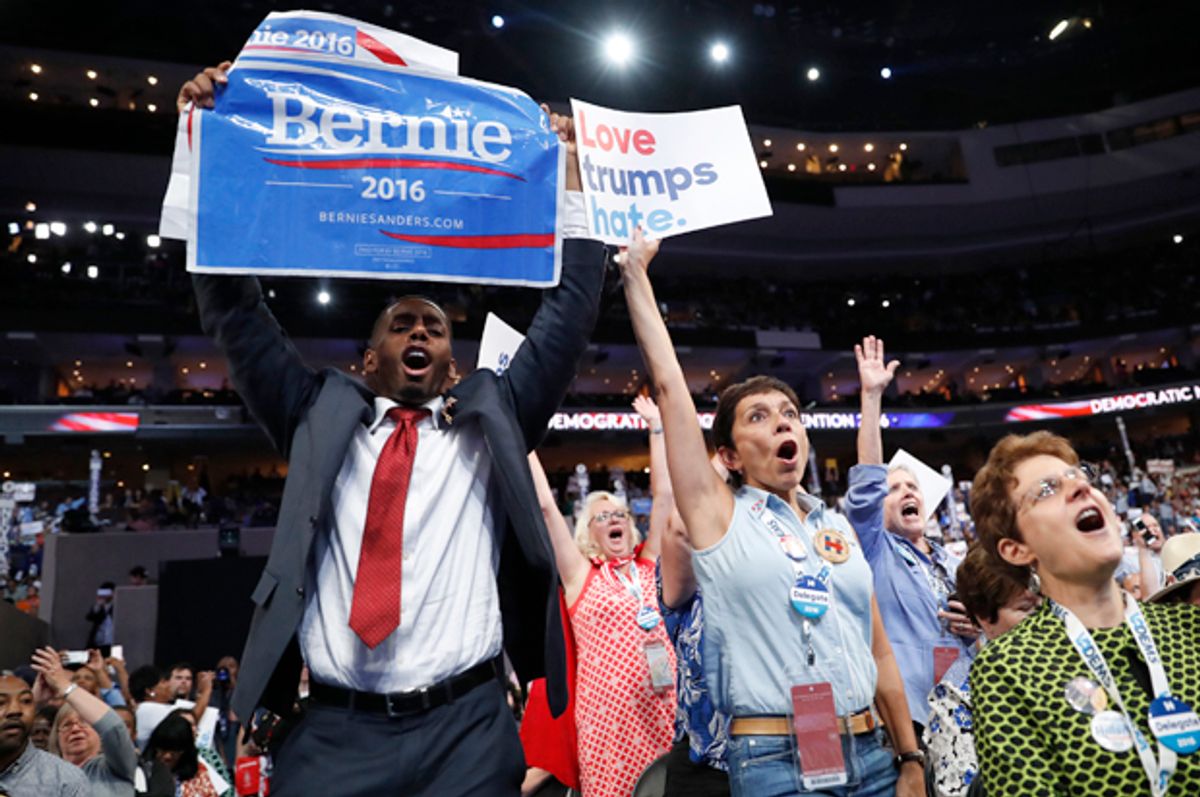 A supporter of Bernie Sanders approaches the podium at the Democratic National Convention in Philadelphia, July 25, 2016. (Reuters/Mark Kauzlarich)
--

As the Democratic and Republican parties pick their nominees for the presidency, they'll do so under a delegate system that rewards states for their partisan loyalty – and ignores the common principle of everyone having an equal say.

It's similar with the Republican National Convention. Ohio, with a population of 11.7 million, will have 82 delegates, while Pennsylvania – home to 12.8 million people – has just 34. Oregon's 4.2 million people have 28 Republican delegates, one fewer than either of the Dakotas, which each has well under a million residents.

Only delegates can vote on party decisions at the conventions. This situation makes it harder for either party to attract independents, who make up about one-third of U.S. voters. If leaders in especially blue states get a disproportionately higher number of delegates than those in purple or red states, they will have more power to control which Democratic Party member is nominated, what the platform will be and what the rules will be for awarding states delegates the next time. It's a similar story in the GOP for particularly red states, whose leaders will get more power over Republican decisions than people from swing states or states that tend to vote for the Democratic Party.

For the Democratic Party, the District of Columbia received 28.34 delegates for each million residents, while Texas had 7.86 delegates per million people. A D.C. Democrat's voice has 3.6 times the power of a Texas Democrat, which is the widest disparity in that party.

That's far more even than the Electoral College disparity, in which Wyoming gets four times more electoral votes per person than Florida.

Why such a difference?

The parties' rule books for delegate selection are quite extensive. The RNC book is 40 pages long, while the DNC rules go on for 165 pages.

It comes down to more than just population. Democrats have a formula for delegates that includes how the state voted in the last three presidential elections, the state's number of Electoral College votes and when the state holds its primary.

The Republican system gives each state three delegates per congressional district, 10 at-large delegates, and three more delegate spots – to be taken by party leaders from that state. The GOP also gives states "bonus" delegates if they voted for the Republican nominee in the previous presidential election, and if they have Republican governors and U.S. senators, and if there are Republican majorities in state legislatures and U.S. House of Representatives delegations.

Both of these systems, in different ways, reward states where the party is strong, at the expense of party members in states that are more evenly divided or could be stronger.

If your state votes solidly blue or bright red, you'll have more power over that national party. Perhaps that's why parties are becoming more extreme; the delegate allocations mean the Democratic Party is dominated by the most liberal states, while conservative states own the Republican Party. That leaves even less of a voice for states that are ideologically moderate, hurting party outreach efforts.

Effects on the public

Of course, the political parties can argue that they are private groups who can determine their own governance however they wish. But that power is not absolute.

In the early 20th century, the Texas Democratic Party sought to exclude Blacks from voting in its primaries. A series of Supreme Court decisions over two decades culminated in a 1944 ruling declaring that state laws establishing party primaries made the Texas primary more than just a function of a private organization. Instead, those laws made the party's primary a key component of the electoral process, and therefore the party could not exclude Blacks from participating.

Beyond being unequal, these systems hurt parties' ability to reach moderates. When New Jersey Democrats get more delegates than Georgians, despite having a smaller population, the party is less likely to select candidates who appeal beyond the die-hard faithful, who are more likely to be found among New Jersey's delegates. It's the same for Republicans, where the Alaska GOP has more than 10 times the delegates, proportionally speaking, as California's GOP.

There may be improvement on the horizon: Democrats are debating their delegate system for the 2024 primary. They are considering whether to continue limiting the power of superdelegates, determining what should happen to the delegates of candidates who drop out and encouraging diversity among party leaders.

And GOP state conventions like the one this year in Texas are having a conflict over who will represent the party at the national convention and in the Electoral College. The question specifically is about whether rank-and-file party members will dominate, or whether the process will be opened up more to independents, libertarians and other nonmembers.

So long as their most loyally partisan states have such disproportionate influence over candidate choices, party platforms and even the rules for delegate allocation, neither party will be at its best for reaching swing states or independent voters.