There is "overwhelming evidence" USPS leaders may have broken multiple laws, two Democrats on the key committee say 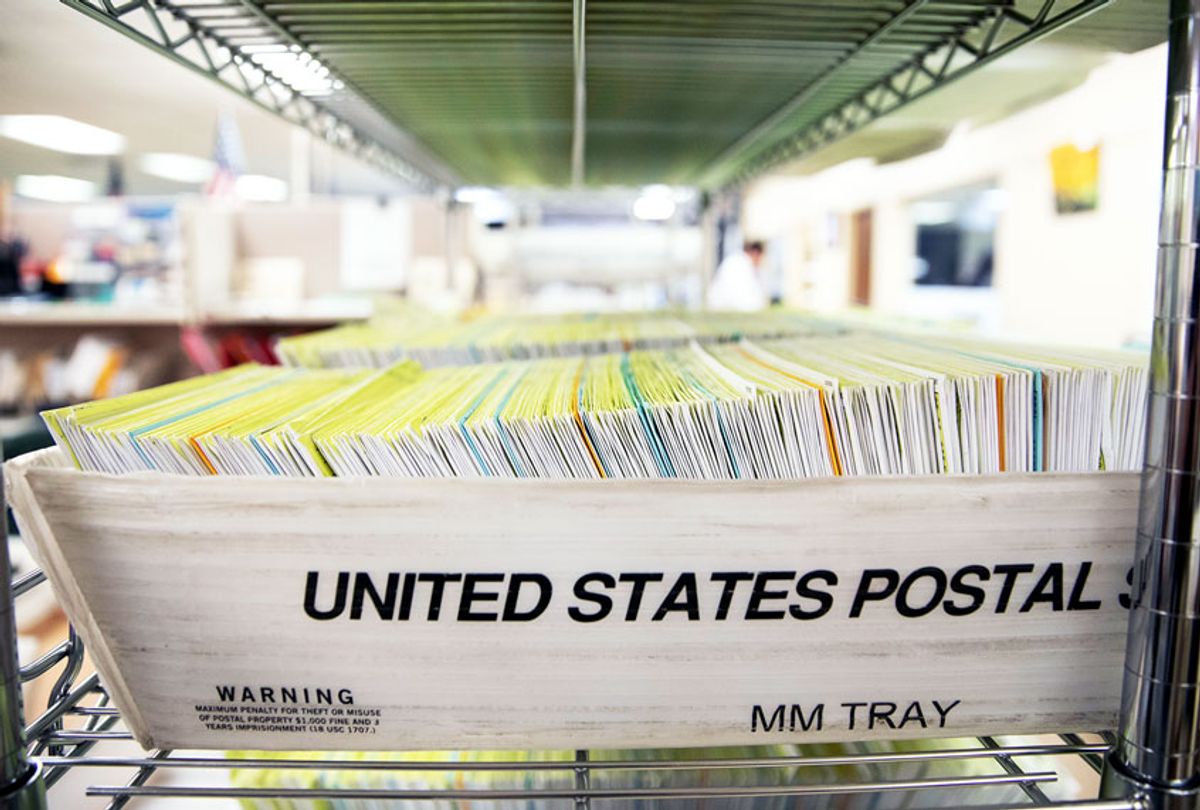 Two Democratic members of the House Judiciary Committee on Monday called for the FBI to launch a criminal inquiry into Postmaster General Louis DeJoy and the U.S. Postal Service (USPS) Board of Governors over operational changes which have slowed mail delivery.

Reps. Ted Lieu, D-Calif., and Hakeem Jeffries, D-N.Y., who serve on the Judiciary subcommittee on Crime, Terrorism and Homeland Security, which has oversight over the FBI, called for the bureau to look into whether DeJoy and USPS leaders "committed any crimes" related to recent moves at the agency which led to a mail slowdown.

"Multiple media investigations show that Postmaster DeJoy and the Board of Governors have retarded the passage of mail," the lawmakers wrote in a letter to FBI Director Christopher Wray. "If their intent in doing so was to affect mail-in balloting or was motivated by personal financial reasons, then they likely committed crimes."

The lawmakers cited two laws: one which imposes fines and prison time for anyone who "knowingly and willfully obstructs or retards the passage of mail" and another which imposes criminal penalties on government employees using their official authority "for the purpose of interfering with, or affecting" an election.

"There is overwhelming evidence that Postmaster General DeJoy and the Board of Governors have hindered the passage of mail," they wrote, noting that mail sorting equipment had been removed from post offices. The USPS has also informed 46 states that "voters could be disenfranchised by delayed mail-in ballots."

"There is evidence that making mail-in balloting more difficult may be one of the motivations for the changes," they wrote, citing President Donald Trump's repeated attacks on mail voting.

Trump last week vowed to block funding to help the cash-strapped agency, citing concerns over universal mail-in voting. DeJoy, a top fundraiser for the Republican Party, donated more than $1.2 million to the Trump Victory Fund before he was appointed to the USPS despite having no experience at the agency.

"It is not unreasonable to conclude that Postmaster General DeJoy and the Board of Governors may be executing Donald Trump's desire to affect mail-in balloting," Lieu and Jeffries said.

DeJoy continues to own $30 million in stock for USPS contractor XPO Logistics, and in June, he purchased up to $100,000 of Amazon stock, they added.

"If the changes instituted at the Post Office by the postmaster general affect positively the value of Amazon or XPO Logistics, then DeJoy would receive a financial benefit," they wrote, noting that it would also be a violation of federal law.

DeJoy, who has denied intentionally slowing down mail delivery, acknowledged the changes have led to "unintended consequences."

Democrats have repeatedly warned that the slowdown could impact the expected surge of mail-in voting in the upcoming election, as well as deliveries of government assistance and vital medications.

Speaker of the House Nancy Pelosi, D-Calif., called the House of Representatives back early from its summer recess to vote on legislation that would reverse DeJoy's changes, though it would also have to be approved by the Republican-led Senate.

"Lives, livelihoods and the life of our American democracy are under threat from the president," Pelosi said in a letter to House Democrats. "That is why I am calling upon the House to return to session later this week."

House Democrats also called on DeJoy to testify this month over policies that pose "a grave threat to the integrity of the election."

At least seven state attorneys general are mulling legal action against the Trump administration over the changes.

"We are going to make sure that every American's vote counts this fall, whether cast by mail or in person," Virginia Attorney General Mark Herring told The New York Times. "My colleagues and I are working as we speak to determine what Trump and DeJoy are doing, whether they have already violated or are likely to violate any laws and what tools we have at our disposal to put a stop to President Trump's ongoing attack on our Postal Service and our democracy."

While Democrats have lead the calls for the USPS to roll back changes made after DeJoy's installment, several Republicans have recently sounded the alarm over the slowdown, too.

Rep. John Katko, R-N.Y., called on the USPS to reverse the changes and for Congress to provide billions to save the agency, noting that his constituents "are more dependent than ever on the USPS to deliver life-saving medications, economic impact payments, unemployment benefits and many other important deliveries."

Sen. Steve Daines, R-Montana, also expressed concerns in a letter to DeJoy about reports that mail collection boxes had been removed throughout the state. Daines said it was "unacceptable" that these moves "could result in delayed mail delivery and reduced mail options."

Sen. Susan Collins, R-Maine, also expressed concerns to DeJoy that "Mainers are experiencing delays in delivery of needed prescriptions, personal protective equipment, such as masks and payments sent through the mail."

Sen. Mitt Romney, R-Utah, slammed Trump's false claims that mail voting is rife with fraud, noting that his heavily Republican state has had all-mail elections for years. Romney alleged that Trump's focus on undermining the USPS was based on his belief that mail voting would cause him to lose.