DNC's first night was claustrophobic and grim: A compelling mirror of life in America 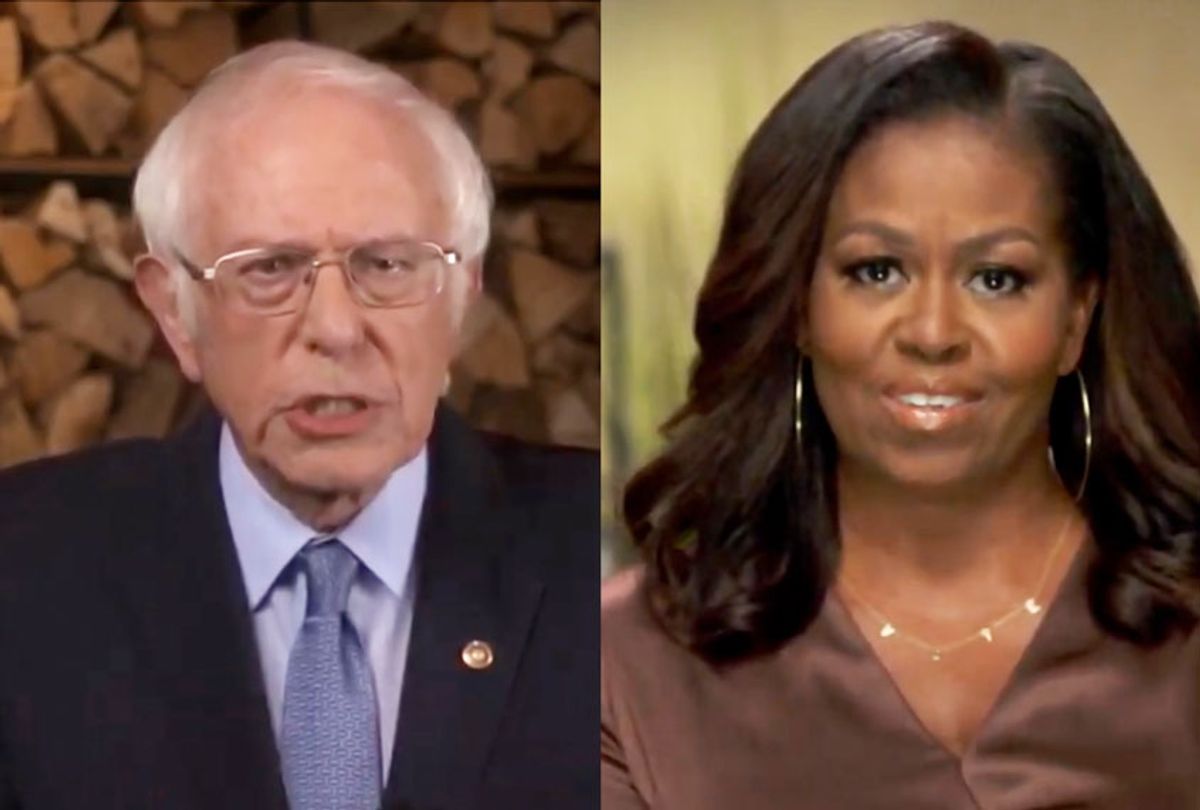 Bernie Sanders and Michelle Obama split screenshots from the DNCC’s livestream of the 2020 Democratic National Convention, (Photo illustration by Salon/Handout/DNCC via Getty Images)
--

Going into the Democratic National Convention, most of the punditry was skeptical. Thanks to the coronavirus pandemic, this convention would be virtual and largely audience-free, robbing organizers of their usual tricks — loud applause, crowd shots, effusive spectacle — typically employed to cover up the inherent corniness of repeated appeals to unity and decency that tend to define Democratic events. Sure enough, within seconds of the convention starting, the Statlers and Waldorfs of Twitter were griping that the whole thing was lame and boring.

But what shortly became evident was that, despite the quiet and stilted nature of a convention dominated by social distancing, the evening ended up being quite successful. Arguably, in fact, it was successful because of the limits caused by the coronavirus.

Instead of a star-studded extravaganza meant to elicit maximum applause lines, the focus was on interviewing ordinary citizens, activists and local politicians about their experiences on the ground in our tumultuous times.

Without the need to pander for applause, the Democrats were able to put together a program that had a somber, even mournful tone more appropriate for our times than the typically giddy, party-down atmosphere of political conventions. The producers leaned into the situation to create an aesthetic of isolation and grief, one that reflected the unfortunate reality of Americans watching at home suffering low-grade trauma and depression from all that has happened in the past few months. Even the awkwardness of watching both politicians and ordinary citizens talking on Zoom served as a reminder of the current hell we're all caught up in, and drove home the "we're all in this together" message that Joe Biden's campaign is pushing.

The family of George Floyd, whose killing by Minneapolis police officer Derek Chauvin kicked off the summer's intense Black Lives Matter protests, held a genuinely moving moment of silence with random Americans on Zoom. A woman named Kristen Urquiza spoke about her father's death of COVID-19 after trusting Trump's assurances that it was safe to go out.

"His only pre-existing condition was trusting Donald Trump," Urquiza said of her father. "And for that, he paid with his life."

That basically set the entire tone of the night. But that's what life is like in this country now. We're a nation of Miss Havishams, consumed by loneliness and nostalgia for things we used to take for granted, like eating out or singing karaoke or just saying hi to someone on the sidewalk without worrying that it's going to spread a deadly disease.

The whole thing felt like a massive version of every Zoom "happy hour" we, the people, have been having — an event you think will be fun but is mostly people being sad and talking about the coronavirus.

The media heavily hyped the presence of former Ohio Gov. John Kasich and other Republicans on the speakers' list, eager as always to stoke intra-party tensions among Democrats. But in truth, the second most important spot of the night went to Sen. Bernie Sanders of Vermont, who identifies as a democratic socialist. The message was pretty obviously "big tent" and not "screw the left," and that reflects the general strategy of Biden's campaign, which focuses heavily on symbolism that panders to moderates while embracing a policy platform that appeals more to the left.

Sanders turned out to be a perfect speaker for the night. After an hour and a half of virtual commiseration with the rest of the country about how terrible things are, Sanders turned on the passion and righteous fury. It was incredibly welcome, helping convert all that sadness and grief into anger.

"Nero fiddled while Rome burned. Trump golfs," Sanders said, putting the blame squarely on Trump for putting "our lives and health in jeopardy" and "rejecting science" and emphasizing that returning to even a semblance of normality means electing Biden.

But Sanders didn't sacrifice any of his leftist bona fides in this endorsement of Biden, arguing that "we have moved this country in a bold new direction," but emphasizing that "if Donald Trump is re-elected, all of the progress we have made will be in jeopardy."

The night ended with Michelle Obama, bringing a strong vibe of Mom who will comfort you without resorting to lies about how the dog isn't dead, but was sent to live on a farm. I mean that as the highest form compliment, because reassuring-but-not-bullshitting is exactly what we all need right now.

"You know I tell you exactly what I'm feeling. You know I hate politics," Obama said, adding, "If you think things cannot possibly get worse, trust me — they can and they will."

Obama focused her pitch heavily on those female voters, mostly mothers, who polls show may have voted for Trump in 2016 but are looking at the horror show that is our country now and feeling doubts.

"Right now, kids in this country are seeing what happens when we stop requiring empathy of one another," she said. "They're looking around wondering if we've been lying to them this whole time about who we are and what we truly value."

Everyone expected the convention format to be a joke, as there was no way it could equal the goofy Americana spectacle we're used to. And the first night of this unprecedented DNC definitely was not normal in any way. But then, neither are our lives. I found myself feeling grateful to the Democratic Party for not trying to fake it.

The goofy Zoom shots, the applause-free speeches, the politicians who aren't any better at finding a good backdrop than we are? Sure, it was awkward. But it was also that rarest of qualities in politics: Authentic. It will be hard to keep that up for four nights, but I must admit — I'm incredibly curious to see if the Democratic Party can pull it off.