Greenpeace gives Democratic platform a C+ on climate plans: "We are not impressed"

"Republicans have no plan," says Greenpeace. But Democrats have ditched a plan to end subsidies for fossil fuels 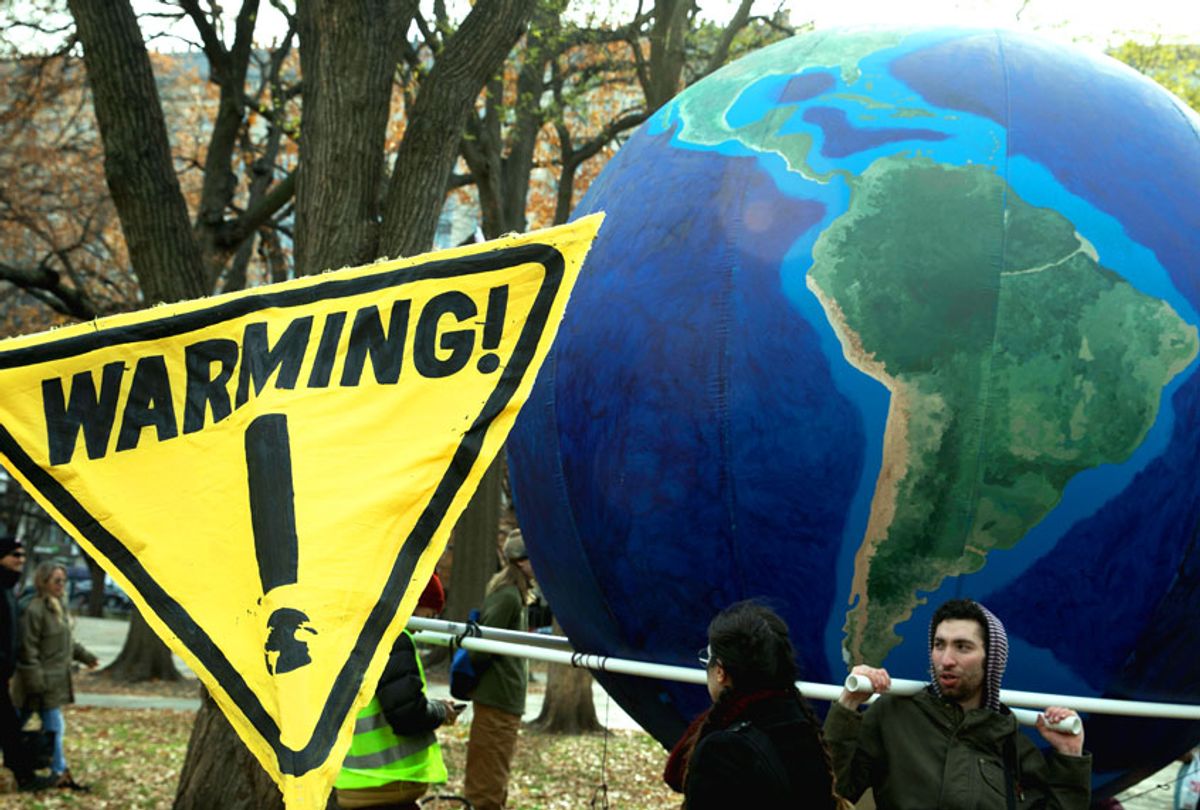 Greenpeace USA announced Wednesday that the platform which Democrats are set to adopt this week earns only a C+ rating, based on the scorecard process the group previously used to rank the climate policies of what was once a large field of Democratic presidential primary candidates.

That C+ (52.5 points out of 100) is notably lower than the B+ (75.5/100) that Greenpeace gave to former Vice President Joe Biden, whom Democrats formally nominated as the party's candidate Tuesday night, or the B+ (77/100) the group gave to his former competitor and current running mate, Sen. Kamala Harris, D-Calif.

Although the soon-to-be-finalized 2020 Democratic platform received "decent marks for advancing renewable energy and environmental justice," Greenpeace determined that there are "critical policy gaps in addressing the power of the fossil fuel industry" and it makes "no mention of the Green New Deal."

The group's scorecard is based on whether candidates intend to "end the fossil fuel era by enacting policies to halt oil, gas, and coal expansion, phase out existing production, and center fossil fuel workers and climate-impacted communities in the transition to a renewable energy economy."

Greenpeace also considers whether they will "advance a Green New Deal, including mobilizing towards 100% renewable energy for all, creating millions of family-sustaining, union jobs, and securing a better future for communities that have borne the brunt of fossil fuel industry exploitation."

The Democratic platform earned 21/50 for plans to phase out fossil fuels and 31.5/50 on the transposition to clean energy. In a statement about the final grade, Greenpeace USA climate campaigner Charlie Jiang urged party members and political leaders to pursue bolder policies going forward.

"The Democrats have an opportunity to galvanize millions of young voters with an ambitious, visionary climate platform, but they're making a mess of it," Jiang said. "We thought the party that claims it wants to lead our country into the future had moved beyond a middle-of-the-road approach to the climate crisis."

"This platform is a step backward, and we deserve better," he declared. "If we use this moment to divest from systems of exploitation and extraction — like police and fossil fuels — and invest in a Green New Deal for workers, families and communities, we have the chance to navigate out of multiple crises at once."

Despite the party platform's shortcomings compared with what steps scientists say are necessary to ensure a livable climate in the future, Jiang suggested that electing Democrats to political office still presents a better path forward in terms of tackling the human-caused planetary emergency.

"We know the Republicans have no plan," Jiang said, noting that President Donald Trump, Senate Majority Leader Mitch McConnell and other Republican politicians "continue to traffic in denial and misinformation while they orchestrate a bailout for oil and gas CEOs."

"But that doesn't mean the Democrats can take their feet off the gas," he added. "We expect action at the scale that science and justice demand."

Greenpeace's grade for the platform came after news broke Tuesday that the Democratic National Committee had quietly removed an amendment calling for an end to federal subsidies to the fossil fuel industry, a demand of climate activists that both Biden and Harris supported during the primary.

Annie Leonard, Greenpeace USA's executive director, denounced the decision as "immoral, criminal, inexcusable." Other campaigners decried it as "ridiculous," "outrageous," and a case of the party establishment "caving to big money donors."

Journalist Emily Atkin wrote Wednesday in her newsletter HEATED that though Biden hadn't yet commented on the move, "if he wants to retain the credibility he's gained so far on climate, he must. Because the fossil fuel industry's crushing grip on our political system is, and will always be, the biggest obstacle to meaningful climate action."

Critiques of the platform came after climate campaigners, including Jiang of Greenpeace USA, welcomed Biden's announcement of Harris as his running mate last week—ahead of this week's mostly virtual Democratic National Convention, which kicked off Monday and is scheduled to conclude Thursday.

"The Biden-Harris administration," Jiang said last week, "must take transformative action from day one to advance a Green New Deal and end the era of fossil fuels."