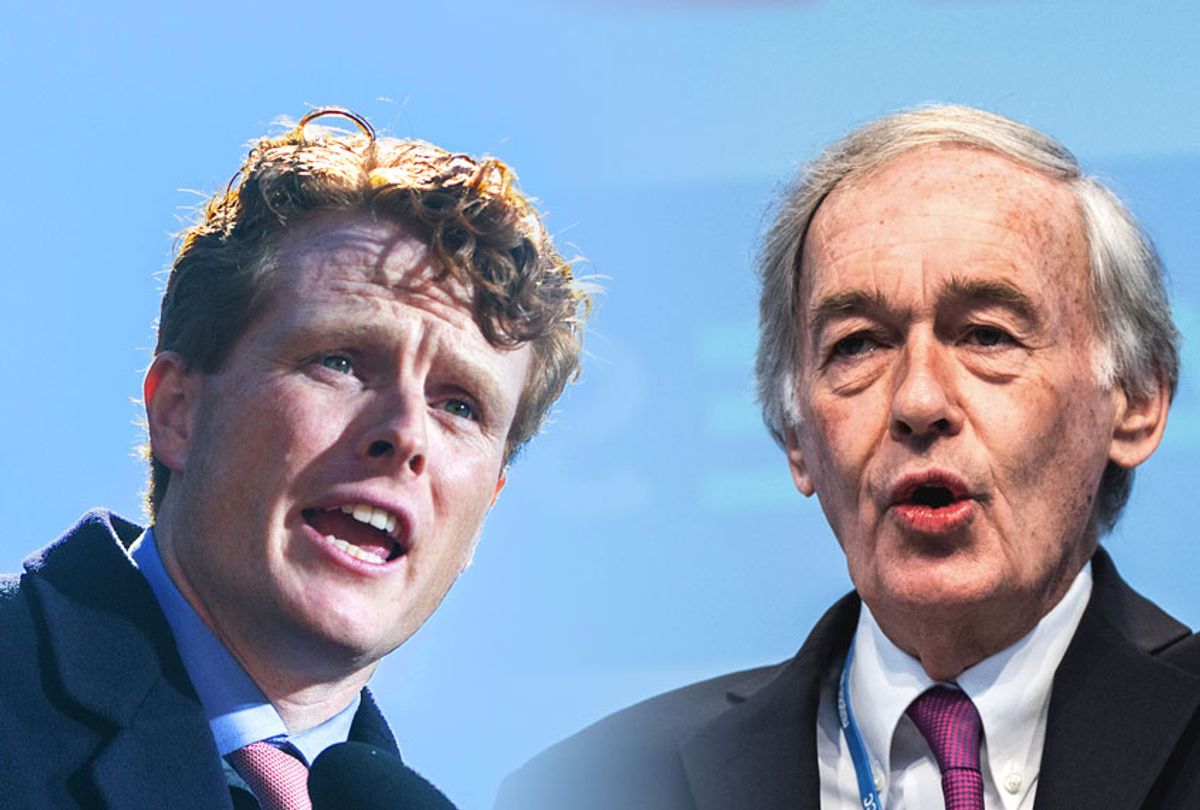 House Speaker Nancy Pelosi came under fire from progressive activists and advocacy groups in Massachusetts and nationwide on Thursday for endorsing Rep. Joe Kennedy III in his bid to unseat Sen. Ed Markey—a move that critics said suggests the Democratic establishment's threat to blacklist firms and strategists that help primary challengers to incumbents was always about blocking candidates from running to the left of the party's current members of Congress.

"Never before have the times demanded we elect courageous leaders as today, and that is why I am proud to endorse Joe Kennedy for Senate," Pelosi said in a video Thursday, citing Kennedy's record of campaigning and fundraising across the country during the 2018 midterm cycle, when he served as a mid-Atlantic and New England regional vice chair for the Democratic Congressional Campaign Committee (DCCC).

"Pelosi's endorsement is both a boon to Kennedy and a snub of Markey, who was an ally of the California Democrat during his long tenure in the House," reported the Boston Globe. "In 2007, during her first turn as speaker, Pelosi chose Markey over several other prominent lawmakers to head a select committee dedicated to energy and global warming issues, and then supported the 2009 climate legislation he co-wrote, bringing it to a vote on the House floor."

In response to the endorsement, Markey—who represented Massachusetts' 7th Congressional District from 1976 to 2013 before being elected to the Senate—tweeted: "Speaker Pelosi is an effective leader who has shattered glass ceilings throughout her career. I had the privilege to work alongside Nancy in the House for decades and any candidate would be proud to have her endorsement. I congratulate Joe Kennedy on securing her support."

However, some of Markey's supporters and groups that have worked to elect progressives expressed frustration with Pelosi's decision to get involved in the high-profile, tight race ahead of the September 1 primary election—particularly given the DCCC's incumbent-favoring blacklist policy, which Pelosi and other party leaders have stood behind despite criticism that it blocks progressives from replicating primary victories like that of Rep. Alexandria Ocasio-Cortez (D-N.Y.) in 2018.

Justice Democrats, which backed Ocasio-Cortez's 2018 challenge to a longtime Democratic congressman, called Pelosi's decision to endorse Kennedy "outrageous" in an email Thursday, declaring that "this move reeks of hypocrisy: the party is setting one standard for progressives and one entirely different standard for the establishment."

The group's email also highlighted that Ocasio-Cortez—who is a lead sponsor of the Green New Deal resolution with Markey and has endorsed him in this race—responded to Pelosi's move in a pair of tweets noting the DCCC's blacklist policy:

The New York congresswoman was far from alone in mentioning the policy. The youth-led Sunrise Movement, which advocates for a Green New Deal and is among the activists and groups backing Markey, pointed to it in a statement Thursday.

"This endorsement is an embarrassment for Speaker Pelosi, and we're honestly shocked she had the gall to invoke social movements in endorsing Joe Kennedy," Sunrise said. "Despite millions of dollars from Joe Kennedy's family, Ed Markey is surging because his movement-connected campaign has inspired genuine grassroots support and because voters have seen him show throughout the years that he's willing to stand up for working people and movements when it counts."

"This endorsement is embarrassing because it plainly reveals a ridiculous double standard," the group continued. "When progressives challenge incumbent Democratic lawmakers who vote with Trump two-thirds of the time, Nancy Pelosi cries foul and works with the DCCC to make a blacklist for anyone helping the challenger. But with today's announcement, Speaker Pelosi is saying that when she likes the challenger, or the challenger has a rich and wealthy family, helping challengers is okay."

Journalists and progressives piled on, with Zach Carter of HuffPost tweeting that "this endorsement makes pretty clear that Pelosi's leadership is not about protecting incumbents or maximizing majorities, but realizing a particular vision for the party."

ABC political reporter Johnny Verhovek tweeted Thursday that a Pelosi aide told one of his colleagues the speaker took issue with Markey's twist on a famous line of former President John F. Kennedy, his challenger's great-uncle, in a recent campaign ad.

As Common Dreams reported after Markey's campaign released the ad last week, the three-minute video won high praise from supporters and political commentators, who said that it "has the exact right message: we live in a society, it has a contract, the government can't just let people die."