Summer calls for pisto manchego — with a fried egg on top

The traditional Spanish stew that welcomes a hodgepodge of summer produce. 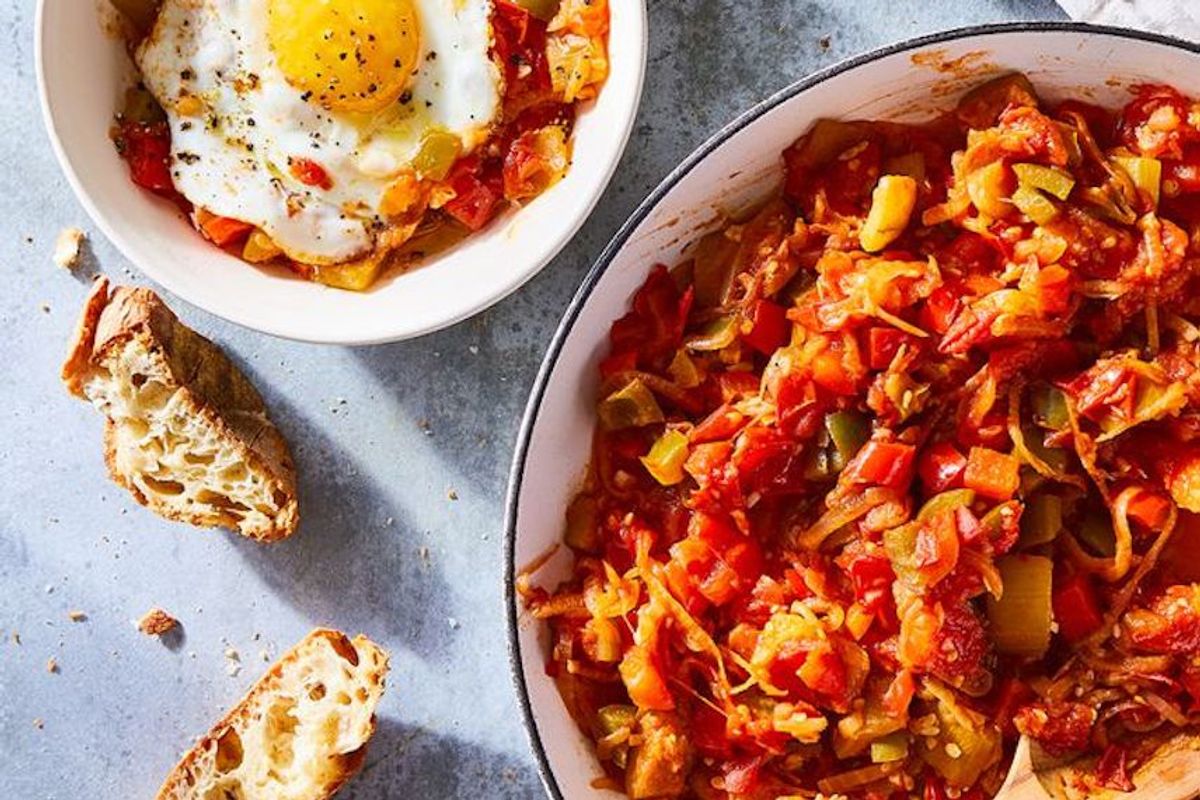 Let me just say this: There's no wrong way to eat a summer tomato.Some of my preferred methods include blended into a velvety salmorejoor sliced as thick as a porterhouse, slathered with mayo and sandwiched between two hunks of bread.

But when I want tomatoes to be more sociable and mingle with other vegetables, I turn to a dish I discovered while living in Madrid: pisto manchego. I first came across it at the elementary school where I taught English, where they served it for lunch. Filing into the cafeteria, some of the students would complain, "Que no me gusta el pisto!" ("I don't like pisto!"), but I always looked forward to pisto day. Eventually, I learned to make the dish myself, incorporating touches and tweaks to make it my own.

Ubiquitous throughout Spain, "pisto" is a stewy dish similar to French ratatouille or Middle Eastern shakshuka. I like to describe it as a summer garden in a bowl—and yes, there's an egg on top.

The essential ingredients are tomatoes, onions, and peppers. While the Manchego (Manchego = from La Mancha) version, with zucchini and a pièce-de-résistance poached egg, is arguably the most popular, each region has a distinct take on pisto. In the green and sunny southwest, Andalusians throw in eggplant, as do their neighbors to the east, in Murcia. In Rioja, land of great wine and excellent chorizo, a cook might finish her pisto by beating a few eggs directly into the mixture at the end. As do the Bilbaínos up north, except they double the eggs, so it skews toward a veggie-heavy scramble.

I recently stumbled upon a grainy episode of Con las Manos en la Masa, a Spanish cooking program that aired from 1984 till 1991. The year is 1985, and the episode's guest is a young director named Pedro Almodóvar, sporting a fluffy mullet and an apron over his powder-pink blazer. Together, he and host Elena Santonja prepare pisto manchego.

Like Don Quixote and some very good hard cheeses, Almodóvar is Manchego himself, and grew up watching his mother prepare pisto.

Over a simmering stovetop and light, entertaining banter, they follow Almodóvar's mother's recipe. The director, who would go on to lead such legendary films as Women on the Verge of a Nervous Breakdown and All About My Mother, jokes that this penchant for cooking—it was the '80s!—may explain why he works so well with women.

Like Almodóvar's films to Spanish cinema, pisto is a staple of Iberian cuisine.

Food historians agree that "pisto" comes from the Latin "pistus," meaning pounded or crushed, and that's the spirit of the dish: a handful of vegetables simmered together until broken down and tender. But the tomatoes present a point of contention. Some cooks swear by chopping ripe tomatoes and throwing them directly into the pan, to sizzle in plenty of olive oil. Others call for blanching and peeling the tomatoes beforehand. Still others skip the chopping altogether and pass the fresh tomatoes through a food processor. And then, there are adherents to canned tomatoes, pre-crushed, or, if we're being fancy, pre-pistus.

Of course, the recipe also depends on what's in season (or what's in the pantry) and family tradition. The first step in Almodóvar's mother's recipe is frying cubed cuts of pork in the olive oil—lending it, and the forthcoming vegetables, a rich, salty flavor.

Chef Alex Raij, whom you might know from her mini-empire of Spanish-inspired restaurants in New York City, learned the gospel of pisto firsthand from her Basque mother-in-law. When she prepares the dish, she starts with an extremely large summer squash—so big, says Raij, that it "kind of freaks me out." I googled it and immediately understood: in verdant Basque Country, squash can reach the size of a full-grown dachshund.

Her mother-in-law peels, deseeds, and coarsely chops the squash before slowly simmering it with tomatoes, onions, and garlic. "She doesn't sauté or brown the vegetables, as one does with ratatouille," Raij explains. And though her mother-in-law doesn't, Raij always finishes her pisto with a drizzle of raw olive oil.

Many cooks recommend letting pisto rest for half an hour before serving, so the flavors really coalesce. A poor planner, I tend to cook when hungry, rendering the idea of waiting to eat the finished dish more than a little ambitious—hopeless, really. It's always good, but it's also always better the following day.

Almodóvar says, in the episode, that pisto is best eaten after a long night of partying. According to the Volver director, it's the perfect dish for a resident of Madrid—where life is organized around dinners that linger well past midnight, followed by gallivanting around the city. When you return, he says, you reheat and enjoy your pisto before finally drifting off to sleep.

This advice might feel more than a little irrelevant given the state of things. But in a pre-pandemic world, I would have agreed with the sentiment. If you're lucky enough to have the chance to call Madrid home, you have no choice but to live by its nocturnal rhythms. Even the earliest of birds finds herself regularly staying out all night and catching the first train home when the metro reopens at 6 a.m. And you do it wilfully because quickly you realize: Madrileños know how to live—no fabulous mullet necessary.

In the summertime, when I find myself especially nostalgic for Madrid's intoxicating, food-driven lifestyle, I like to make Manchego-style pisto for a taste of my former home. I sometimes make a large batch and reheat it after a night of one too many glasses of Albariño—served with a freshly fried egg.

The Spanish phrase "darse pisto" means to be pretentious or braggy. This dish is the opposite. It's a humble recipe that emphasizes ease of preparation: You cook it low and slow, using whatever's on hand, either at peak ripeness in the garden or peak accessibility in the pantry. As Alex Raij says, pisto is great for anyone who receives CSA (community-supported agriculture) boxes—"when you get one of everything but not much of any one thing."

After cooking pisto often enough though, you'll find a way to make it your own.