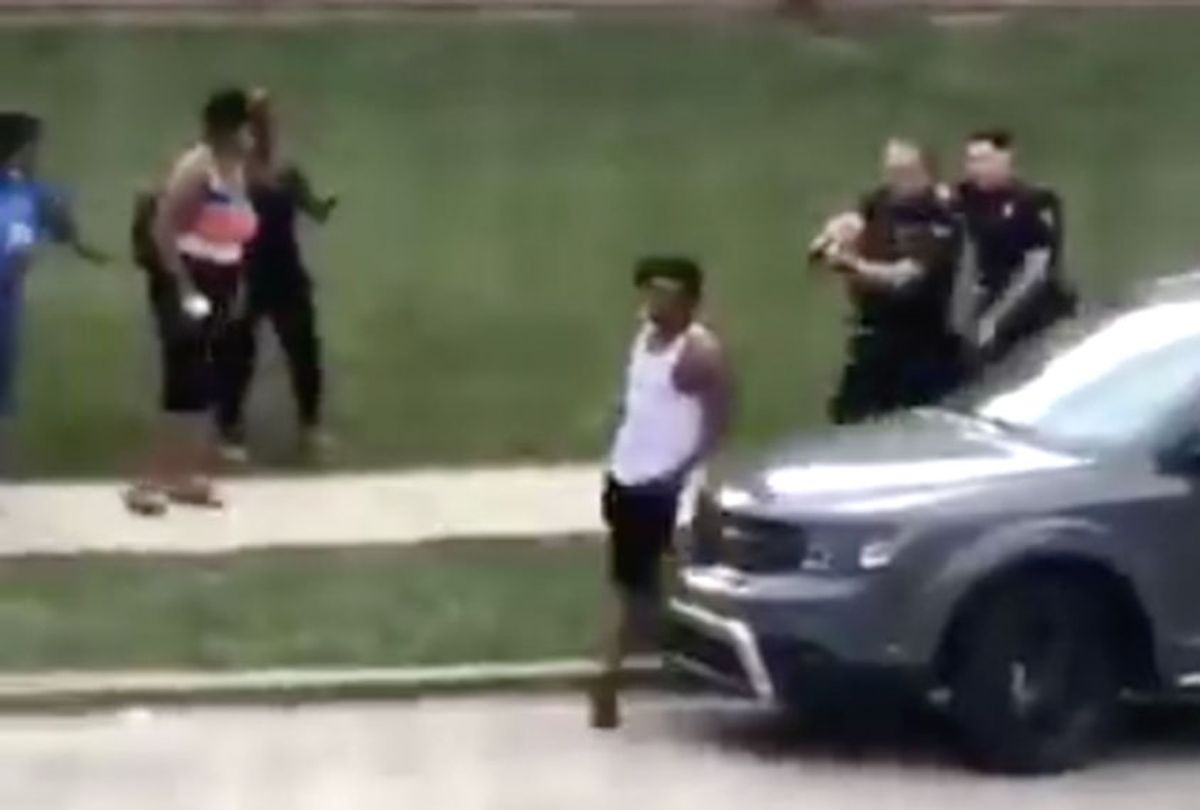 Police in Kenosha, Wisconsin appear to shoot a man seven times in the back at point blank range after he ignores commands (Twitter/@JulianCastro)
--

Two police officers in Wisconsin were placed on administrative leave after video showed a Black father being shot multiple times in the back at close range as he tried to enter a vehicle.

Protests broke out in Kenosha, Wis., a witness recorded the moment police officers followed a man identified by officials as 29-year-old Jacob Blake to a SUV after responding to a domestic incident. Neighbors said Blake was trying to break up a fight between two women, according to the Kenosha News.

One of the officers can be seen on the video grabbing Blake by the shirt as he tries to access the vehicle. Seven shots can be heard on the recording, though it remains unclear how many officers fired their weapons. Witnesses told the Kenosha News that officers used a Taser on Blake prior to the shooting.

Blake remains in serious condition after being airlifted to a Milwaukee hospital about 40 miles away, according to the Milwaukee Journal Sentinel.

Ben Crump, an attorney for Blake's family, tweeted that Blake's three sons were in the car when he was shot.

"They saw a cop shoot their father," he wrote. "They will be traumatized forever. We cannot let officers violate their duty to PROTECT us. Our kids deserve better!!"

"That don't make no sense to treat somebody like that, who is not armed, with the kids in the back screaming," Blake's fiance, Laquisha Booke, told WLS-TV.

The Wisconsin Department of Justice on Monday announced that the officers involved in the incident were placed on administrative leave. The Division of Criminal Investigation (DCI) said it would provide prosecutors with a report on the shooting within 30 days.

"DCI is continuing to review evidence and determine the facts of this incident and will turn over investigative reports to a prosecutor following a complete and thorough investigation," the department said in a news release.

White House chief of staff Mark Meadows told reporters that Attorney General William Barr would be briefed on the shooting.

"The video tells a story that's troubling, and yet at the same time, we'll get a full briefing within the next couple of hours," he said.

"Tonight, Jacob Blake was shot in the back multiple times in broad daylight," he said. "While we do not have all of the details yet, what we know for certain is that he is not the first Black man or person to have been shot or injured or mercilessly killed at the hands of individuals in law enforcement in our state or our country."

Dozens of residents gathered at the scene after the shooting, and dozens of squad cars converged on the neighborhood, according to the Kenosha News.

Protesters gathered outside of the Kenosha County Public Safety Building on Sunday night, chanting "no justice, no peace," according to USA Today. The sheriff's department announced that the Kenosha County had declared an emergency curfew to demand demonstrators disperse.

"At this point in time I'm just trying to keep my neighborhood safe," Anthony Kennedy, an alderman for the district, told The New York Times. "I understand why people are hurt. Why they are frustrated, but justice can't be street justice. The process has to work out."

Bernice King, the daughter of Martin Luther King Jr., appeared to refer to the shooting in a Sunday tweet.

"We shouldn't have to see one more video of a Black human being brutalized and/or gunned down by police in a clear case of excessive or unwarranted force," she wrote. "Anybody who doesn't believe we are beyond a state of emergency is choosing to lack empathy and awareness."