Last call for the 25th Amendment? Trump's Cabinet won't depose him — but they should

Trump's cabinet members have one last chance to save the republic and redeem themselves. Of course they won't 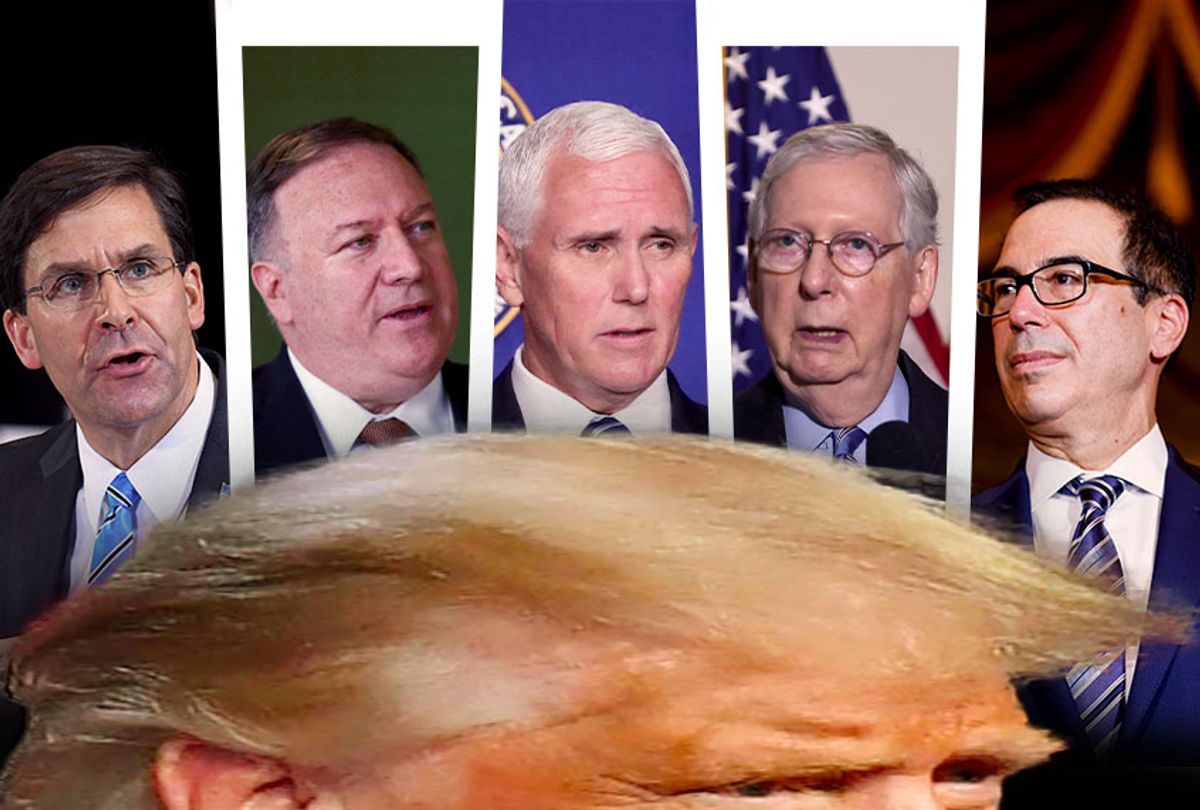 The president of the United States is relentlessly threatening the right of citizens to exercise their right to vote. He is also saying that he might not leave office if he loses the election, and that the election is "rigged" — unless he wins. He also spends most of his days watching television, raging, fulminating, lying, demanding loyalty of those around him, demeaning his political opponents and trading in conspiracy theories, while creating chaos instead of a plan to address a pandemic that could take 300,000 American lives by the end of the year.

Is such a person fit for this office? Any office?

As has been the case every single day from the beginning of this horrific tweet-fest mockery of a presidency: It's 25th Amendment time.

No, of course it won't happen — not with the loyalist, anti-democratic ideologues the president has methodically surrounded himself with in his cabinet, likely to this very purpose. But by any objective (i.e., non-cultist) view it should happen — before the upcoming election is further thrown into chaos to frighten off voters.

It won't happen. But we would fail our duty to this country if we did not pause to note this fearful moment in time, did not look again at the purpose of this critical amendment, and did not call out the Trump administration's cabinet members who failed to take this step to protect an election and save this democratic republic.

In "The Twenty-Fifth Amendment: Its Complete History and Earliest Applications," by John D. Feerick, the author notes that the framers of the Constitution did not spend much time at the Constitutional Convention in 1787 on the subject of presidential succession:

They seem to have thought they handled the matter adequately by providing for the office of Vice President and by inserting in the Constitution the following clause on presidential succession:

This vague language in the Constitution was unworkable in practice and hampered decisions in terms of both presidential inability and vice presidential vacancies. Feerick notes: "For the first 52 years of the existence of the presidency, our nation was remarkably fortunate. No President died in office, although three vacancies did occur in the vice presidency."

As to what constituted "incapacity" of a president, no one could really say. And in an American tradition, this became a can that would be kicked down the road time and again after each crisis.

Questions on this score arose numerous times. There was James Madison, who in the summer of 1813 was "indisposed by illness" for weeks; James Garfield, who survived, incapacitated, for an excruciating 80 days after being shot; Chester Arthur, who was diagnosed with Bright's disease and suffered from "spasmodic nausea, mental depression, and indolence" and who, as a result, developed a very casual approach to his presidency, often not beginning work until noon or one o'clock (which sounds like someone we know); Grover Cleveland, who in the summer of 1893 took a cruise on a yacht and secretly underwent an operation to remove a cancerous growth on the roof of his mouth, which entailed removing a large portion of his upper jaw; William McKinley, who survived an assassin's bullet for about a week; Woodrow Wilson, who fell ill while on a speaking tour in late September 1919 and then, after returning to the capital, suffered a stroke that paralyzed the left side of his body; Franklin D. Roosevelt, who entered his fourth term in 1945 gravely ill and not able to function to his previous level, dying soon after; and Dwight Eisenhower, who had a heart attack in 1955, and then a stroke in 1957.

Presidents will, due to ego or a sense of duty, often do anything to hide their incapacities from the public, and even their own cabinet members. Cleveland essentially disappeared for an entire summer, undergoing two procedures and being fitted with an artificial jaw. (When a letter was published in the Philadelphia Press detailing the operations, it was called a "hoax.") According to Feerick, the first operation took place "while Cleveland was unconscious and strapped to a chair propped up against the yacht's mast." Wilson's condition was hidden from the public, from Congress and from members of his cabinet. Feerick points out that from that time "until the inauguration of Warren G. Harding on March 4, 1921, the country was without the services of an able President." Before running for his fourth term, FDR is said to have made his own new deal with his physician to simply not tell him any bad news.

The 25th Amendment, written and adopted in 1965 to address this issue, was ratified by the necessary 37 states in February 1967. But the question about what constitutes "inability" remained — it was purposely not defined, allowing for interpretation of how a president could become unable to carry out his duties, including due to mental illness.

Sections 1 and 2 deal with succession of the vice president; sections 3 and 4, with the question of inability to carry out the duties of the office.

Section 3 allows for a president who is cognizant of his own impairment to personally inform Congress in writing that he is unable to carry out his duties. Perhaps one might stretch the interpretation of his writing to Congress. Might that include writing to the world endless missives in ALL CAPS rife with misspellings, bad punctuation and excessive use of exclamation points, all of which point to a level of derangement far beyond the grammatical?

Seriously, we have a person in the office of the presidency who is mentally and temperamentally unfit for serving the office, as attested to by a petition that was signed by 350 psychiatrists and mental health experts, and delivered to members of Congress in December 2019.

Yale Medical School professor Dr. Bandy Lee, one of the three authors of the petition (and a frequent interview subject at Salon), described Trump's continued embrace of conspiracy theories as actually a public health issue because of his ability to draw members of the public into a "shared psychosis at the national level."

Speaking of mental health experts, Mary Trump, who is the president's niece and a clinical psychologist, and who recently published the bestseller "Too Much and Never Enough: How My Family Created the World's Most Dangerous Man," has said in recent interviews that the best thing anyone could do for Donald Trump would be to remove him from office.

And it's not just mental health experts who are worried. National security experts are as well. Just hours before Joe Biden gave his acceptance speech at the Democratic Convention, 73 senior national security officials, nearly all of them Republican, attested to the unfitness of the current occupant of the White House.

In the infamous "Anonymous" 2017 op-ed published in The New York Times, a senior Trump official wrote: "From the White House to executive branch departments and agencies, senior officials will privately admit their daily disbelief at the commander in chief's comments and actions. Most are working to insulate their operations from his whims."

But in the spinning wheel of the Trump administration, many of those officials are gone now, and it is not enough (nor was it ever) to try to shield the country from his worst impulses, which have both deepened and darkened. White supremacists and QAnon followers are just fine folks to him and he openly appeals to them. He and members of his campaign staff worked, sometimes gleefully, with Russian agents to win the last election. It didn't take a three-year bipartisan investigation to tell us that; any moderately intelligent child would have come to this conclusion from the moment candidate Trump said during a press conference, "Russia, if you're listening …" (No, he wasn't joking.) He has continued to make such appeals to foreign leaders to interfere in our election.

Finding himself behind in the polls, Trump's authoritarian impulses are running hot, and he repeatedly broadcasts his threats to bring down our democracy. He speaks privately with Russian President Vladimir Putin, who no doubt is providing guidance to an eager disciple on the dismal arts of demagoguery and authoritarian rule.

Trump not only threatens mail-in voting, he is now threatening in-person voting, saying he will be sending thugs of one sort or another to oversee matters.

There's not time enough before the election for another impeachment, and, really, what would be the point?

Like Alexandria Ocasio-Cortez, I was a bartender in New York City (in my few years trying to be an actor), and I still know when the time has come for a last call. Section 4 of the amendment provides for the vice president and a majority of principal officers of the executive departments to make a formal declaration to Congress of a president's inability to serve. It gets complicated from that point. Essentially the president can counter, and the vice president and a majority of the cabinet must then re-counter. And then two-thirds of both houses of Congress have to agree.

Last call for the 25th Amendment. Do your duty. Give up on this election for the sake of having future elections in the country you profess to love, before all is lost.

We well understand that you won't. But that's not to say that it should not be done. Because it should. We cannot wait for the election, because the president himself has put the election in peril. This would give Congress one last chance to do its duty, too — though at an even higher standard than impeachment, which only requires a majority in the House.

When Benjamin Franklin was asked by Elizabeth Willing Powel of Philadelphia — a "lady remarkable for her understanding and wit," according to a contemporary — what kind of government he had helped to found, he told her: "A republic, if you can keep it." Now the question must be asked again: Can we?

An editor and poet, Kirk Swearingen received his degree in journalism half a lifetime ago from the University of Missouri–Columbia and then took a Greyhound Bus directly into the bowels of early 1980s New York City to study acting. His work has appeared in the Riverfront Times, Delmar, MARGIE, The American Journal of Poetry and Salon. He is currently writing a memoir about his years in New York.