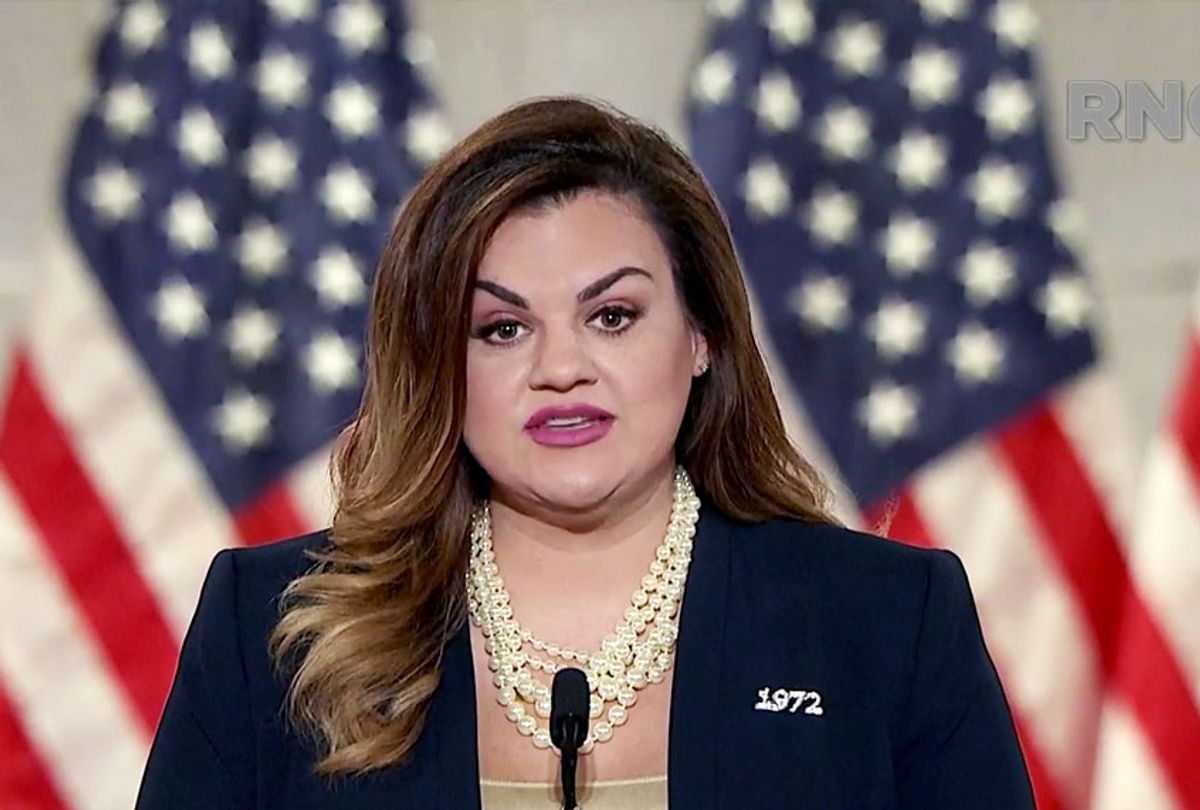 The notion that there's anything "pro-life" about the Republican National Convention was already a joke, built as it is on the premise that over 178,000 Americans dead from COVID-19 — 1,234 alone on the second day of the convention — is no big deal. Still, it was spectacular watching the Republican Party — now little more than a personality cult for Donald Trump — give the game away on the "pro-life" lie by inviting an anti-abortion speaker named Abby Johnson, who let slip a few months ago on Twitter that she doesn't think married women should have the right to vote independent of their husbands.

That the anti-abortion movement is motivated by misogyny and not by some deep sense of morality was proven beyond a shadow of a doubt when the "pro-lifers" backed Trump in 2016. What the anti-choice movement and Trump have in common is a desire to, as Trump put it, "grab 'em by the pussy", though Trump was clearly speaking in a more literal sense, whereas anti-choicers want to use the long arm of the law rather than the president's greasy, stubby fingers.

For whatever reason, anti-choice activists want to maintain this ridiculous myth that their motives are a respect for "life," rather than a fundamentalist zeal to strip women of basic human rights. So they invited Johnson, a former Planned Parenthood employee who has made a living for years telling a preposterous story, which she repeated once again on Tuesday evening at the RNC, about "an unborn baby fighting back" during an ultrasound-guided abortion.

In the hours before the convention, however, it was revealed that in May Johnson had tweeted, "I would support bringing back household voting," adding, with a tee-hee emoji, "How anti-feminist of me."

"Household voting" is one of those esoteric ideas that pings around Christian fundamentalist circles, which are often organized around the idea that the founding fathers never intended the U.S. to be a secular nation, but rather a Christian nation run on "biblical" principles.

The concept of "household voting" is that individuals have no right to vote, and there should only be one vote per household, however that is defined. Just in case you're wondering how this would work in practice, Johnson clarified that in a later tweet: "In a Godly household, the husband would get the final say."

Johnson has also drawn negative attention for a video in which she argues that police would be justified in profiling her adopted son, who is biracial, while leaving alone "my brown-haired little Irish, very, very pale-skinned, white sons, as they grow up."

To be clear, there was never any such thing as "household voting" in the U.S. Before the women's suffrage movement began to make progress in the late 19th century, women simply couldn't vote anywhere in the country, regardless of their marital or household status. But it's common in Christian right circles for wacky ideas like this to proliferate, morphing as they go, as in a game of telephone.

One possible source here is pseudo-historian David Barton, who has spread a great deal of misinformation used to prop up the idea that the U.S. was meant to be a theocracy. Barton argued in a 2014 radio show that bans on women voting weren't really repressive or misogynistic, but were targeted "to keep the family together" by treating women as part of a "family unit" under "the head of the family." (Which doesn't explain why widows and unmarried women living alone were also denied the right to vote.)

Barton later denied that he was calling for women to lose the right to vote, which is also what Abby Johnson says. But there's no question he was arguing that American men of the 18th and 19th centuries had honorable intentions when they denied women suffrage.

It's difficult to ascertain how widespread this concept of "household voting" is within the religious right, as that's a tightly focused in-group that tends to communicate larglyy through newsletters, radio shows and other methods that conceal their views from the bright light of search engines. Salon found a video on The Blaze, Glenn Beck's network, in which two fundamentalist podcasters, Summer White Jaeger and Joy Temby, argue in favor of this one-household, one-vote system.

This idea doesn't seem to have gotten a whole lot of traction, however, not because of concerns about going too deep into misogyny but because, as commenters at Jaeger and Temby's website pointed out, this household rule would effectively disenfranchise married women while retaining voting rights for single women who live on their own. That's a pretty big loophole in what is clearly meant to be a backdoor method to deny women the right to vote.

In trying to defend herself on Twitter Tuesday night, Johnson only dug herself in deeper by tweeting, with a winky emoji, "Yes. So shocking! A husband and wife who are in agreement and a wife who honors her husband as the head of the home. Gasp!! What a weird, biblical concept!!"

She seemed unaware that a major obstacle to designing our voting laws based on a "biblical concept" is not just the 19th Amendment, but the First Amendment.

Unsurprisingly, there's a whole lot more about Johnson that's shady. For one thing, there's good reason not to trust her tale of converting from a pro-choice Planned Parenthood employee to an anti-choice radical.

Johnson claims she left the organization because of a moral awakening after seeing a fetus "fight" against an abortion procedure, but legal documents filed by Planned Parenthood in 2009 point toward a different reason: Johnson was put on a performance review plan at the Texas clinic where she worked.

Laura Kaminczak, a friend of Johnson's, told the Texas Observer in 2010 that the disciplinary action was about the inappropriate use of work email, after she and Johnson had exchanged sexually graphic emails. Kaminczak also said that Johnson was attracted to the lucrative prospect of becoming a religious right figurehead, which promised "$3,000 speaking gigs," which is a lot more money than you can make working at a nonprofit clinic in rural Texas.

The discrepancies in Johnson's story are too numerous to recount here, but perhaps the most important, discovered by Texas Monthly reporter Nate Blakeslee, is that the abortion Johnson claimed to have witnessed simply didn't happen. And not just because her description of a 13-week fetus "fighting" is silly on its face. Patient records at the clinic where she worked show that there were no ultrasound-guided abortions on that date she has cited, or in the weeks before and after.

In addition to her noxious views on race relations and women's suffrage, Johnson has also written extensively on her belief that "contraception is NOT okay."

She says she opposes contraception is because "Birth control was created so that we could separate sex from procreation," and "you should only have sex when you are open to life."

Much of the mainstream press is covering the Johnson controversy as a matter of insufficient "vetting" of convention speakers, especially after a different speaker was booted from Tuesday's program at the last minute for tweeting a bunch of anti-Semitic conspiracy theories. Johnson, however, was still allowed to speak despite her track record of unscrupulous behavior and blatantly misogynist opinions.

The reason is simple enough: It's not like there's some better option. The entire anti-choice movement is rife with liars, grifters and religious fanatics, and whoever they could have swapped in for Johnson would have been just as bad. It's a movement based on a lie, which is that they're about "life" and not about upholding the patriarchy. To quote Matthew 7:18, "a bad tree cannot bear good fruit."