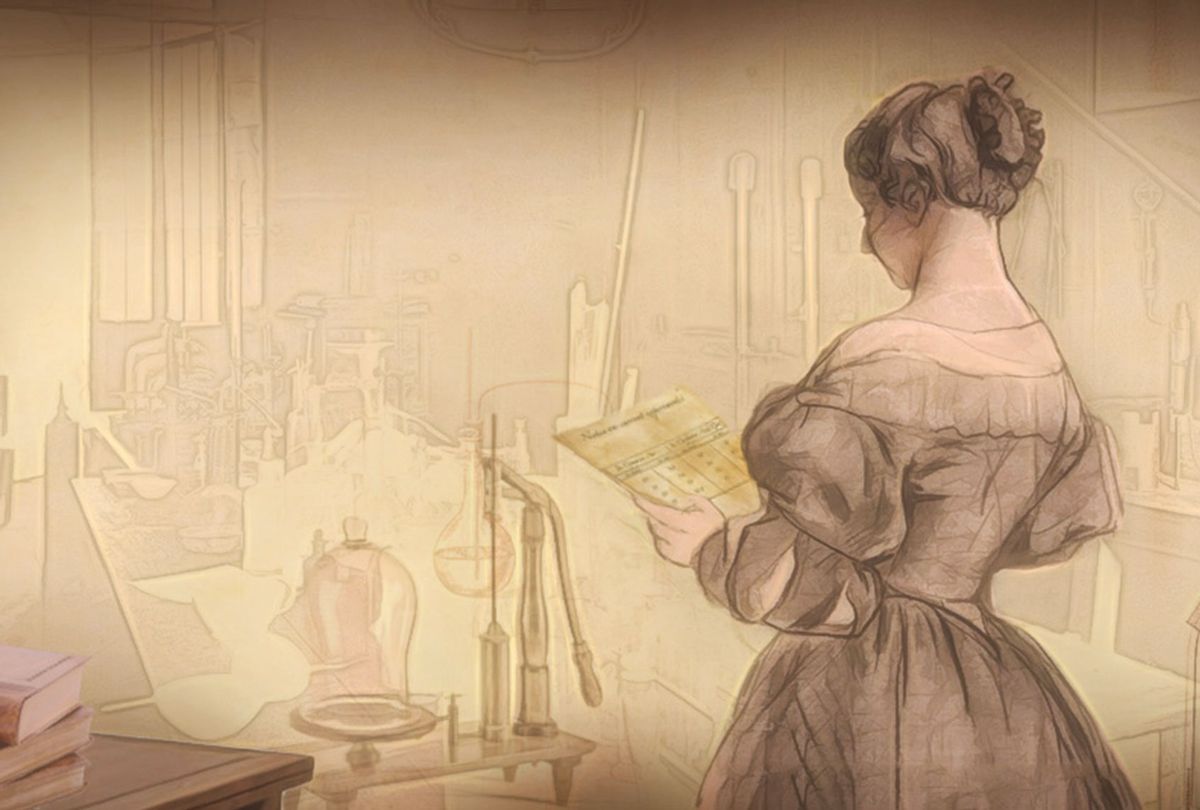 Born on July 17, 1819, Eunice Newton Foote was an amateur scientist and a women's rights campaigner who was friends with American suffragist Elizabeth Cady Stanton. Foote's experiments with atmospheric gases and her insights about past climate were overlooked for more than a century. (Drawing by Carlyn Iverson/NOAA/Climate.gov)
--

John Tyndall was a mountaineer, a prolific writer of science books, a prominent physicist, a professor of natural philosophy at the Royal Institution of Great Britain and an original member of the X Club, an exclusive Victorian scientific dining club whose members were frequent contributors to the well-regarded journal Nature.

With his doctorate, his social and intellectual friendships and networks with some of the greatest minds of the Victorian period and his easy access to the Royal Institution laboratories, it is no wonder that Tyndall reached the heights of scientific achievement and recognition and that his work still plays an important part in today's scientific discussions.

For over 160 years Irish-born Tyndall has been credited with the original discovery of the absorption of thermal radiation by carbon dioxide and water vapor — the very cornerstone of our current understanding of the greenhouse effect, climate change, weather and meteorology. He was the first to clearly demonstrate and understand the physical basis of the greenhouse effect.

This, however, was just one of many firsts in the history of climate science. There was a another first from a hidden character only acknowledged in 2011 by Raymond Sorenson, later researched by John Perlin and the main subject of a symposium held in May 2018 at University of California Santa Barbara. This hidden character was a woman, an American amateur scientist and a suffragette who served on the editorial committee for the 1848 Seneca Falls Convention, the first women's rights convention in the United States.

Three years before Tyndall first published his broad findings in 1859 in the Proceedings of the Royal Society, Eunice Newton Foote demonstrated the absorption of heat by carbon dioxide and water vapor, made the connection to their variability as a possible cause of climate change and wrote up her findings in a paper entitled "Circumstances affecting the heat of the sun's rays". While Foote did not directly detect or explain the physical basis of what we now call the greenhouse effect, she does seem to be the first to suggest that changing amounts of carbon dioxide and water vapor could change the climate.

Certainly, Tyndall's experiments were more sophisticated than Foote's and he is rightly credited with establishing the experimental basis for the assumed greenhouse effect, first suggested by Horace Benedict de Saussure in the 1770s and then developed by Joseph Fourier in the 1820s and in 1836 by Claude Pouillet. And yet, while acknowledging the work of these men Tyndall did not reference the work by Foote. Why?

There is some debate about whether Tyndall even knew of Foote's work. While there was some mention of her paper in various North American publications (i.e. the column's section of the September 13, 1856 issue of Scientific American reported that her experiment on the effects of the sun's rays on different gases afforded "abundant evidence of women to investigate any subject with originality and precision"), so far not a single reference to her work has been found in any letter, journal or publication of the major contemporary figures in this field. It would therefore seem possible that very little, if any, significant discussion and/or proper citations/summaries of her work reached England during the time Tyndall was working on and publishing his results.

Did he know about her work and simply ignore it because she was a women and/or an amateur American? Perhaps. Certainly during Victorian England a clear prejudice against women, amateurs and Americans as not quite as capable or professional as British men existed. And Tyndall was certainly no democrat and no supporter of female emancipation.

Did he know about the significance of her work and actively plagiarized it? Maybe, although Roland Jackson, Tyndall's biographer, general editor of the Tyndall's correspondence and past Chief Executive of the British Science Association, and Ed Hawkins, professor of climate science at the National Centre for Atmospheric Science at the University of Reading, feel that if Tyndall had actually known about Foote's results he would have started his experiments using CO2 and water vapor. He didn't. He initially tried dry air, oxygen, hydrogen, and nitrogen before experimenting on CO2 and water vapor. Furthermore, within the scientific community questions of priority were strongly contested and as Jackson points out if anyone had felt "Tyndall had suppressed someone else's priority for the absorption of radiant heat by carbon dioxide and water vapor, they would have been gleefully vocal in their criticism. Yet no one seems to have protested in Britain or Europe."

Is the lack of credit for Foote due to a coincidence, predjudice against women/amateurs/and/or Americans or a deliberate omission on Tyndall's part? Whatever the truth is, and we may never know the truth, it is now clear that Foote's experiment, while not definitive (there were many uncontrolled factors in her experiment), added to the understanding of climate science. As Katharine Heyhoe, director of the Climate Science Center at Texas Tech University, points out, even though Foote's research did not directly establish the physical basis of what we now call the greenhouse effect, she "was the first person to say in print that if carbon dioxide levels were higher, the planet would be warmer" making her results "remarkably prescient."

While both the professional scientist Tyndall and the amateur scientist Foote clearly deserve a place in the pantheon of past climate scientists and those to come in the future, neither one of them wrote about the impact of human activity on the climate. In fact, it was not until 1938 that Guy Callendar, a British steam engineer and amateur climatologist, made the quantifiable link between global warming and the emission of gas through human activity. Furthermore, as Jackson has cautioned "It is us who claim Tyndall and/or Foote as founders of climate science, not them. While we should certainly honour their achievements, we should not project our current interests and priorities onto their age-old research agenda".

A previous version of this piece first appeared in Scientific American.