Fear-mongering and corruption are nothing new in Republican politics. But Donald Trump has gone far beyond that 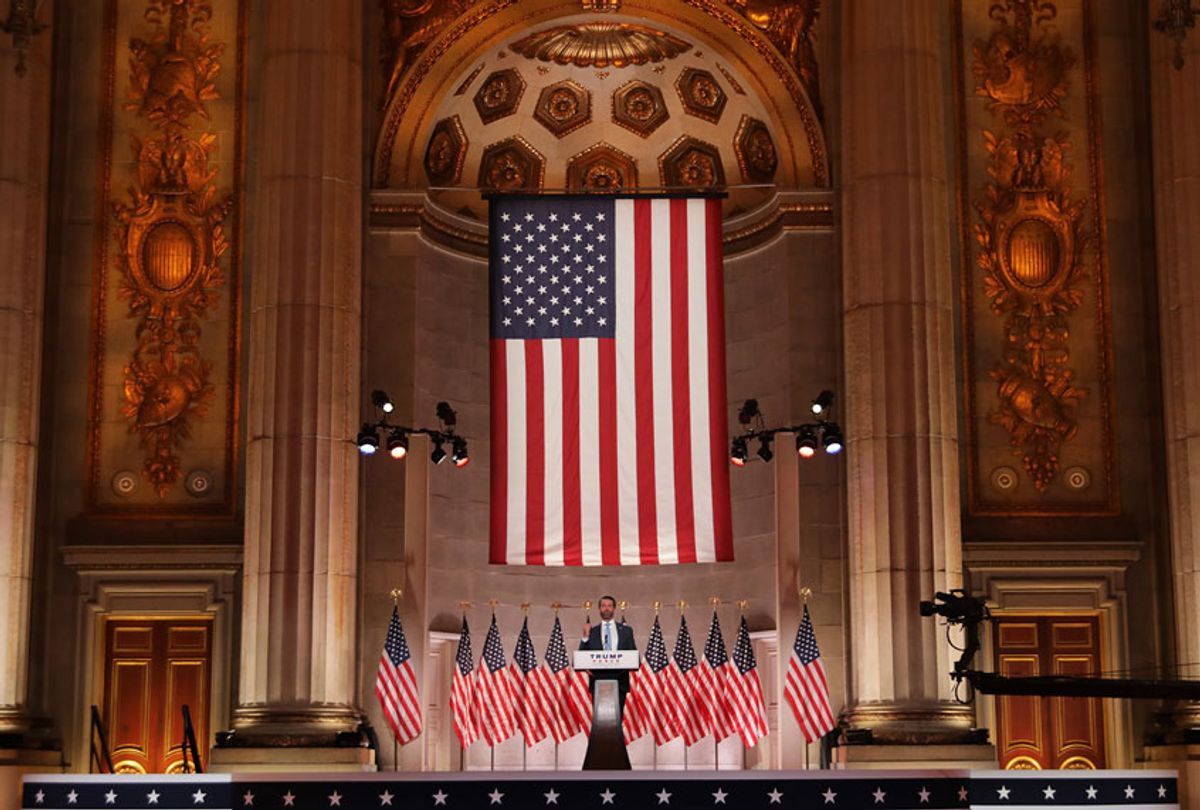 Donald Trump Jr. pre-records his address to the Republican National Convention at the Mellon Auditorium on August 24, 2020 in Washington, DC. The novel coronavirus pandemic has forced the Republican Party to move away from an in-person convention to a televised format, similar to the Democratic Party's convention a week earlier. (Chip Somodevilla/Getty Images)
--

It's a political truism that a second-term election campaign is a referendum on the incumbent. And when you have President Trump's terrible approval rating, the strategists all say that his only real hope is to refocus the electorate on Joe Biden and make voters disapprove of him more than they disapprove of Trump.

Trump doesn't really require such advice since insulting and degrading his political opponents is what brings the most joy into his life in any case. He would do it even if he didn't have to. And the Republican convention has featured speakers from both nights who have painted a vivid picture of the dystopian hellscape that awaits America if it makes the mistake of voting for the Democrats this November.

But so far, Republicans have not had much success in creating a new image of Biden himself. Trump and his followers have been saying that he's a doddering old man for months, but for all the norm-busting of this convention, they haven't really gone there, at least not yet. They did feature one speaker on Tuesday night, former Florida Attorney General Pam Bondi, who served as one of Trump's defense lawyers at his impeachment trial, who tried to make the case that Biden and his family are corrupt criminals. I'll be surprised if that left a mark, particularly considering that several of Trump's previous campaign officials have been charged or convicted of crimes — one of them just last Friday. (This week, the New York attorney general announced an investigation into the Trump Organization that includes subpoenas for Eric Trump.)

Mostly, the GOP seems to have settled instead on a sweeping MAGA-style indictment against Democratic voters as a bunch of socialists and anarchists who are waging a violent assault on everything dear to God-fearing Americans. It would seem they have decided that Joe Biden isn't enough of a bogeyman to push what Trump calls the "suburban housewives" back to the safety of the Republicans, so they need to scare them to death with visions of antifa and MS-13 stealing into their neighborhoods in the dark of night.

This claim was made explicit in the appearance on Monday by Mark and Patricia McCloskey, the St. Louis couple who wielded guns at Black Lives Matter protesters who were marching down their residential street. As it happens, the McCloskeys don't actually live in a suburb — the protests were heading to the mayor's house, which is near theirs — but they were supposedly speaking for all those terrified white homeowners in cul-de-sacs. The problem is that it's 2020, and suburban America isn't just affluent white people who live in McMansions but rather a highly diverse racial and ethnic mixture, as has been true for years.

The "suburban housewives" aren't freaked out by antifa or Black Lives Matter. They're freaked out by the COVID pandemic and the terrible economy, by the fact that their kids can't go to school and by the global shame of our president's crude, racist behavior. At least until we got to Melania Trump's alternate-universe speech late on Tuesday night, nothing at the Republican convention has addressed any of that.

So if Republicans aren't going hard after Joe Biden and aren't discussing any of the issues that are consuming Americans' lives in this weird moment of pandemic and economic chaos, what are they talking about? Well, they are talking about their Dear Leader — and when I use that term I've never meant it more literally. This RNC isn't really a political convention at all. It's a cult meeting.

It's bad enough when Trump holds cabinet meetings where everyone around the table is expected to thank him for his superior leadership. Sometimes they even thank God for sending him to us. I guess we've gotten used to seeing his staff and other members of the administration start every speech with a few words about his superior guidance and direction. This is obviously the sick deal they've made with Trump and their consciences.

But there's something incredibly creepy about the way Trump is using the grandeur and power of the White House itself (which is totally unethical, by the way — what else is new?) to greet average citizens so they can tell him to his face how wonderful he is and thank him for his greatness. These scripted episodes designed to make it seem like he actually has human feelings ended up being a loyalty ritual.

In Trump's meeting with frontline workers, a nurse was moved to say this:

I am so in awe of your leadership. Honestly, I know many people have said often interesting things but it takes a true leader to be able to ignore all that stuff and take what is right and not be offended by all the words being said. You really do show that positive spirit to us and as nurses I appreciate that.

The president smiled beatifically. In an earlier time he would have held out his hand for her to kiss his ring.

Even worse, in a similar meeting with a group of former overseas hostages who have been brought back to the U.S. during Trump's term, they went around in a circle to thank him for his benevolence in bringing them home. It wasn't about them. It was all about him as usual.

I couldn't help but be reminded of the meeting he took with victims of gun violence in which he had written notes reminding him to say, "I hear you"

On Tuesday he pulled a similar White House stunt, pardoning a man convicted of bank robbery before the cameras and later, as the New York Times put it, "using the majesty of the White House for blatantly political purposes, Mr. Trump appeared during the convention's second hour as 'Hail to the Chief' played and strode to a lectern where five immigrants were waiting to take the oath to become citizens." This from a man who salivates over the death penalty, cruelly separates families at the border and attempted to ban all people of the Muslim faith from immigrating here. These people were props for the cult leader to present his alleged benevolence to the masses.

And as you'll recall, before the convention, the platform committee of the RNC gave up the ghost and just said that whatever Trump wants to do is fine with them. There is no agenda and no ideology. There is only Donald Trump, day by day, saying and doing whatever takes his fancy.

Essentially, the first two nights of the RNC have comprised dark warnings about invading hordes of merciless strangers, contrasted with glorious paeans to the greatness of Donald Trump, the mythic (and I do mean mythic) hero of our time. As Monday night speaker Natalie Harp put it:

I think this observation captures where the Republican Party is today: Culture-war grievance at the bottom facilitating corruption at the top, wrapped up in a cult of personality. To be fair, those first two items are standard-issue modern conservative politics. It's that last innovation that Donald Trump brought to the party.