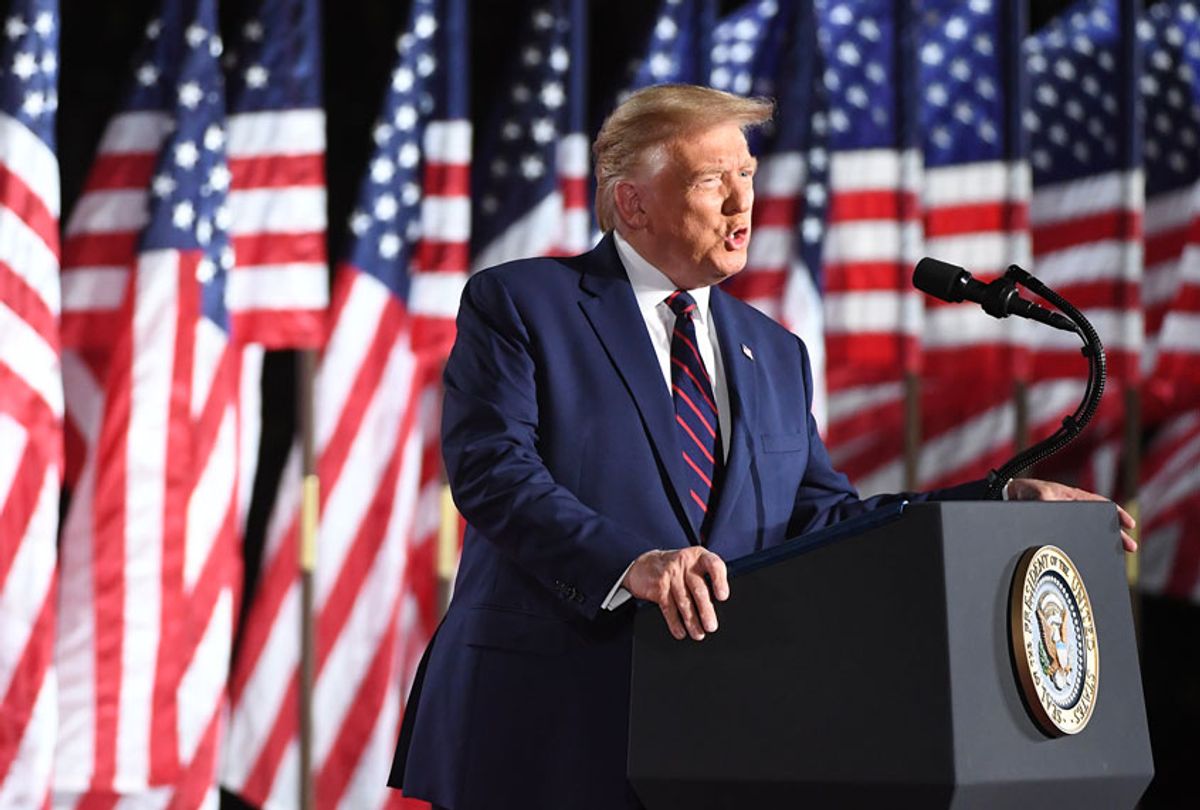 President Donald Trump speaks on the fourth and final night of the Republican National Convention with a speech delivered in front a live audience on the South Lawn of the White House. (Jonathan Newton /The Washington Post via Getty Images)
--

President Donald Trump capped off the Republican National Convention on Thursday with a stream of false claims in front of a large, mostly maskless crowd in front of the White House.

Trump, like other Republicans who spoke during the four-day event, described a very different and much more successful presidency than the public has seen and argued that only he could put an end to the chaos happening under his watch.

The president spoke for about 70 minutes in front of a tightly-packed crowd that CNN anchor Jake Tapper described as a "potential super-spreader event." Lacking the usual energy of his now-suspended campaign rallies, Fox News hosts panned the speech as "flat" and "far too long" and MSNBC pundits labeled it "bad" and "boring." "This president is a serial liar, and he serially lied tonight," said CNN fact-checker Daniel Dale. "I counted, preliminarily, more than 20 false or misleading claims."

Trump spent much of his speech describing "mayhem" across America, much like he did during the 2016 convention. "Nobody knows the system better than me, which is why I alone can fix it," he said in 2016. Unlike the previous speech, Trump's comments Thursday described the country under his presidency, not Barack Obama's.

Trump tried to blame the violence on "Democrat-run cities," even as he took credit for Obama's accomplishments, like passing the Veterans Choice Act, which his predecessor signed in 2014.

Trump's claim that he alone could fix the violence was reminiscent of his 2017 inauguration vow that "this American carnage stops right here." But Trump and other speakers described a country that has spiraled out of control since that day.

It was a message echoed throughout the night.

"Like cops across this country, we are staring down the barrel of a public safety disaster," said Pat Lynch, president of the New York City Police Benevolent Association.

Trump attorney Rudy Giulaini spoke of "continuous riots in American cities" under Trump but claimed that current levels of civil unrest provided a "good view" of what the country would look like under Democratic nominee Joe Biden.

Biden hit back at the bizarre narrative at the convention on Thursday, questioning if Trump is "even aware he's president."

"These are images from Donald Trump's America today," he said in a statement. "The violence we're witnessing is happening under Donald Trump. Not me. It's getting worse, and we know why."

Trump also tried to claim success in the fight against coronavirus and the fight for social justice in a speech that sent fact-checkers scrambling.

"For almost 10 hours this week, President Trump and his allies used the unfiltered platform of a national political convention to paint a portrait of two Americas that do not exist," wrote Washington Post White House reporter Toluse Olorunnipa. "In one — a misrepresentation of life under Trump — the coronavirus has been conquered by presidential leadership, the economy is at its pre-pandemic levels, troops are returning home, and the president is an empathetic figure who supports immigration and would never stoke the nation's racial grievances."

Ivanka Trump did not fare much better on the fact-checking front, wrongly praising her father for building the "most robust testing system in the world" and mischaracterizing his use of the Defense Production Act to "produce ventilators within weeks," and falsely claiming he cut drug prices before sharing a viral moment with her stepmother Melania Trump.

Other speakers included Housing and Urban Development Secretary Ben Carson, the only Black member of Trump's cabinet, who defended the president from charges of racism.

While some speakers, like Ann Dorn, the widow of fallen St. Louis Police Officer David Dorn, and the parents of slain ISIS hostage Kayla Mueller delivered emotional and powerful speeches as they spoke in support of Trump, they were largely overshadowed by speakers like Giuliani, who described the country as descending into an apocalyptic hellscape.

The night ended with a lengthy and elaborate fireworks display that spelled out "Trump 2020" on the National Mall and an unusual musical performance from a balcony at the White House.

Ethics experts said Trump's use of the White House and federal property for a political convention was an "abomination" and likely illegal.

"It is an abuse of the power entrusted to this man, the breach of a sacred trust," said former White House ethics chief Walter Shaub.

After the event was over, some attendees were confronted by protesters outside the White House fence.

Sen. Rand Paul, R-Ky., and his wife were escorted by police to their hotel. At one point, an officer that was pushing protesters back with his bicycle fell over on top of Paul.

"Just got attacked by an angry mob of over 100, one block away from the White House," Paul tweeted. "Thank you to @DCPoliceDept for literally saving our lives from a crazed mob."