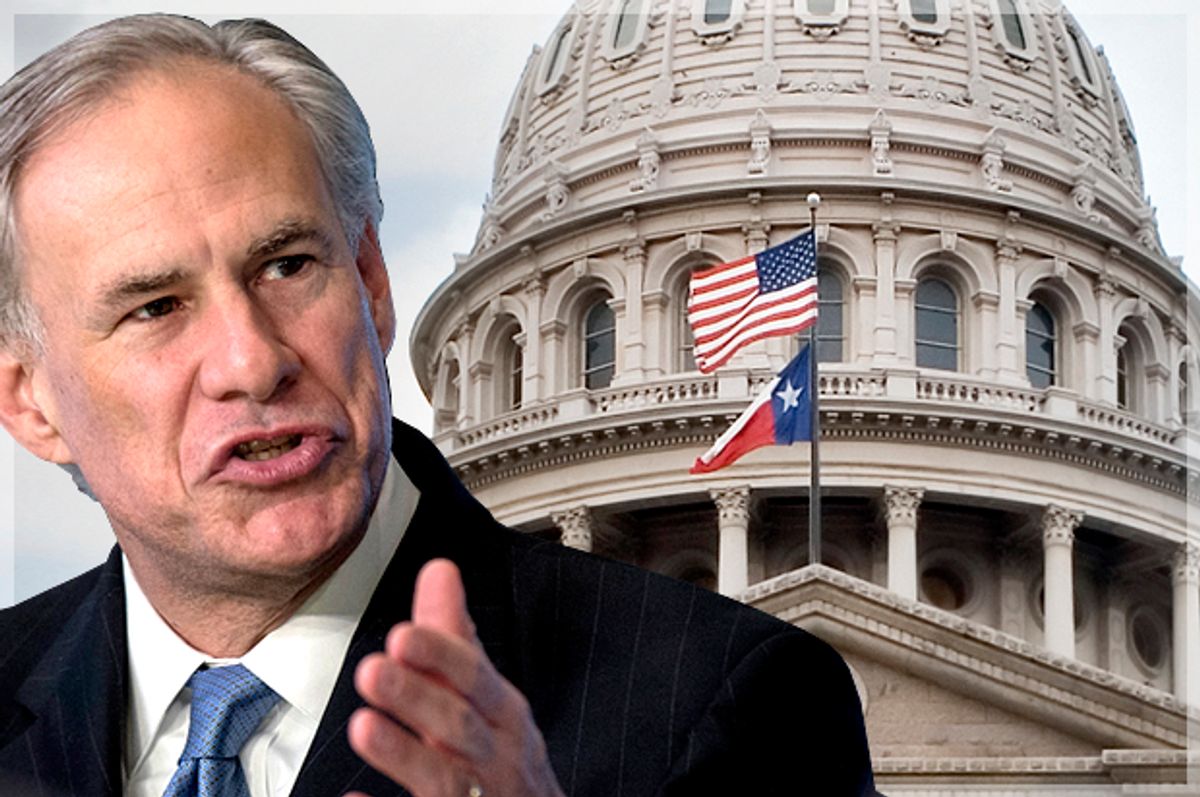 Gov. Greg Abbott and top Texas leaders announced Tuesday that they will push for legislation next year that would freeze property tax revenues for cities that cut police budgets, just days after the Austin City Council approved a budget that will cut police funding by one-third and reinvest money in social services.

The proposal sets up what is expected to be a fight in the 2021 Texas Legislature over what police reform should look like following the in-custody death of George Floyd that reignited a national movement against police brutality and racial injustice.

"Any city in the state of Texas that defunds law enforcement will have their property tax revenue frozen as of that time," Abbott said in Fort Worth, where the press conference was held. "This will be an effective tool that effectively will prevent cities from being able to reduce funding support for law enforcement agencies."

The death of Floyd, a Black man who died after a Minneapolis police officer knelt on his neck for nearly eight minutes, has spurred protests against police brutality and calls to reduce police funding across the state and country. Police reform advocates are pushing cities to reallocate police funds to areas like housing, social services and public spaces.

Texas' four largest cities — Austin, Dallas, Houston and San Antonio — each spent more than a third of their general funds on their police departments in their respective 2020 fiscal years. But on Thursday, Austin became the first major Texas city to cut its police department's budget, shifting $150 million to other services. The city council approved the measure after Austin's police department faced months of criticism over the killing of an unarmed Black and Hispanic man, the use of force against anti-police brutality protesters and the investigation of a demonstrator's fatal shooting by another citizen. The move quickly drew outcry from Texas Republican leaders and prompted Tuesday's press conference.

Last week, the Texas Legislative Black Caucus unveiled provisions they plan to include in a George Floyd Act when the legislative session begins in January. The proposals included some related directly to Floyd, like banning chokeholds and requiring officers to intervene if another officer is using excessive force. But it also revived efforts that have previously failed at the Capitol after facing opposition from police unions. One such measure would be to end arrests for criminal violations that at most would result in a fine, like theft under $100.

While Abbott has mentioned potential proposals following Floyd's death, they have mostly fallen in line with what police unions also support, like increased training. But the item Lt. Gov. Dan Patrick said would be a priority in the Senate is to ensure police funding is not diminished.

Abbott was joined in the press conference by Patrick, Texas House Speaker Dennis Bonnen, several Republican North Texas lawmakers and Fort Worth Mayor Betsy Price. During the press conference, Abbott made a reference to a report from The Wall Street Journal that showed increases in homicides and robberies in Austin this year. The report lists Austin and Fort Worth, the city Abbott praised for its public safety policies, as both showing high increases in the percentage of murders from this year to last — city crime data reveal those percentages amount for nine more murders in Austin this year compared to 2019 and 13 in Fort Worth.

Experts have pointed out that crime rates are nowhere near the high levels of two decades ago. An analysis of the University of Pennsylvania shows a marginal increase in violent crimes compared to previous five years in Austin.

During the press conference, Bonnen, who is not returning to the legislature in 2021, criticized Austin Mayor Steve Adler for opposing police funding cuts in previous years during property tax debates, only to support it now.

"It is not acceptable," Bonnen said. "Law enforcement is not a tool of political agendas and I would ask the city of Austin to stop using them as one."

Austin City Council member Greg Casar said in a statement that the council was following what Austin residents wanted, and said Abbott, instead of supporting police reforms proposed in the Black caucus' George Floyd Act, relied on fear-mongering.

"The message from the tens of thousands of Austinites who made their voices heard in this year's budget process was clear: We must decrease our over-reliance on police to handle all of our complex public safety challenges and instead reinvest in domestic violence shelters, mental health first responders, and more," Casar said.

Other major Texas cities are also weighing police budgets, now with Abbott's proposal in mind. San Antonio's proposed budget for 2021 increases overall police funding by $8 million, but cuts overtime and funds health and violence prevention programs. In Dallas, the proposed 2021 budget includes a minor increase in police funding, and $3.2 million for safety net resources. Both cities are scheduled to approve their budgets in September.

The Houston City Council approved a minor funding increase to its police department in June, but an amendment that tried to redistribute some of the money to other areas, like the police oversight board and loans for businesses owned by Black and brown people, was rejected.

In Fort Worth, where Abbott's press conference was held, voters supported renewing the half-cent sales tax that funds at least 24% of the city police department's budget in July. According to the Fort Worth Star-Telegram, the city is considering a proposal to redirect some funds within their Police Department to expand their mental health team, increase funding to nonprofits and creating a civilian response program.

Abbott said Tuesday's press conference was held in Fort Worth because "Fort Worth is doing it right" in terms of investing in police and public safety. While Abbott mentioned Floyd's death in Minneapolis, there was no mention during the conference of Atatiana Jefferson, or other high-profile Texas police killings of Black residents. Jefferson, a 28-year-old Black woman, was killed last year after a Fort Worth police officer shot into her home during a welfare check. The former officer, Aaron Dean, has been indicted on a murder charge.

Advocates have argued that while police departments receive a large portion of city funds, safety net programs remain underfunded and Black and brown communities are disproportionately affected by unemployment, lack of adequate housing and poverty. In 2018, 19.6% of Black Texans lived below the poverty line, according to the U.S. Census Bureau, compared with 20.9% of Hispanic Texans and 8.5% of non-Hispanic white Texans.

"The only way that you're going to prevent crime is by addressing the root causes of crime, and the main one is poverty," said Nora Soto, co-founder of Our City Our Future in Dallas. "Police have acted as a poverty patrol. They're criminalizing poor people."

Police unions explain that law enforcement is expensive and involves a wide range of responsibilities, which include everything from responding to potentially dangerous emergency 911 calls to attending monthly neighborhood meetings.

"Just because of the sheer volume of tasks that we are responsible for dealing with, public safety is going to be the most expensive part of a city budget across the board. That's really just demand," said Jennifer Szimanski, public affairs coordinator for the Combined Law Enforcement Associations of Texas.

Disclosure: Steve Adler is a former Texas Tribune board chairman and has been a financial supporter of the Tribune, a nonprofit, nonpartisan news organization that is funded in part by donations from members, foundations and corporate sponsors. Financial supporters play no role in the Tribune's journalism. Find a complete list of them here.

Juan Pablo Garnham reports on urban affairs for The Texas Tribune, focusing on the main challenges of the state’s largest metro areas — Houston, Austin, San Antonio, El Paso and Dallas-Fort Worth, where he is based.