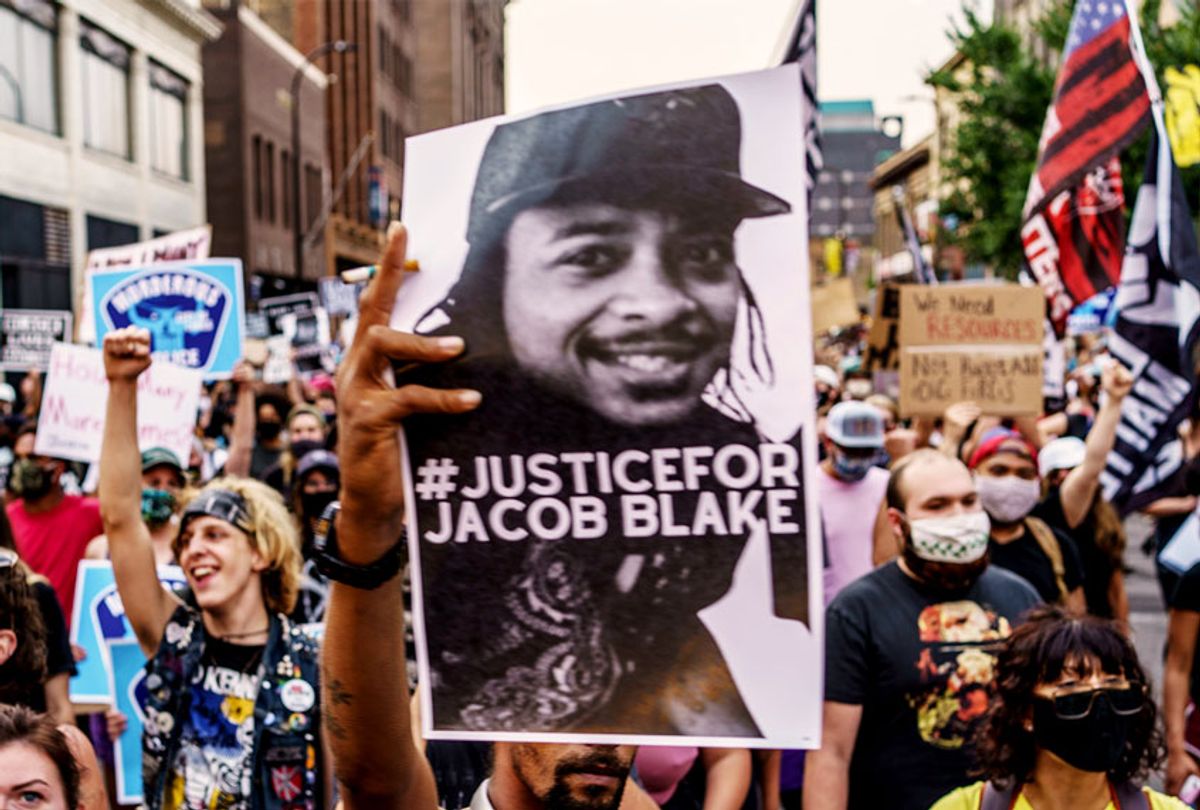 Protesters march near the Minneapolis 1st Police precinct during a demonstration against police brutality and racism on August 24, 2020 in Minneapolis, Minnesota. - It was the second day of demonstrations in Kenosha after video circulated Sunday showing the shooting of Jacob Blake -- multiple times, in the back, as he tried to get in his car, with his three children watching. (KEREM YUCEL/AFP via Getty Images)
--

Jacob Blake, a 29-year-old Black man whom police shot in the back multiple times in Kenosha, Wisconsin on Sunday, is now paralyzed from the waist down and doctors do not yet know if the injury is permanent, his father told the Chicago Sun-Times on Tuesday.

The younger Blake, a father of six, was reportedly trying to break up a fight before officers followed him to his vehicle and fired several shots at point-blank range as Blake opened the driver-side door. Blake's partner, Laquisha Booker, told a local television station that the couple's three children were in the back seat "screaming" when police shot him.

A video of the police shooting began circulating on social media Sunday, sparkingprotests in the Wisconsin city and other communities across the country. The incident came nearly three months after footage of Minneapolis police killing George Floyd led to nationwide demonstrations.

The Sun-Times reported that Blake's father is driving from Charlotte, North Carolina to be with his hospitalized son, who now has "eight holes" in his body. The 29-year-old grew up in Winston-Salem, North Carolina before moving to Evanston, Illinois during middle school. He has been living in Kenosha for about three years.

"I want to put my hand on my son's cheek and kiss him on his forehead, and then I'll be OK," said the elder Jacob Blake. "I'll kiss him with my mask. The first thing I want to do is touch my son."

Blake's father also addressed the protests and unrest in Kenosha, where vehicles and dozens of buildings were set on fire overnight, according to Newsweek.

The man who said he made the cellphone video, 22-year-old Raysean White, said he saw Blake scuffling with three officers and heard them yell, "Drop the knife! Drop the knife!" before the gunfire erupted. He said he didn't see a knife in Blake's hands.

The governor said he had seen no information to suggest Blake had a knife or other weapon, but that the case is still being investigated by the state Justice Department.

The officers were placed on administrative leave, which is standard practice in a shooting by police. Authorities released no details about the officers and did not immediately respond to requests for their service records.

Newsweek reported that "hundreds of people remained outside the Kenosha County Courthouse in the city after the curfew took effect, prompting police to fire the first of several rounds of tear gas at around 8:30 pm in a bid to disperse them."

Evers also said after the shooting that although all the details aren't yet known, "what we know for certain is that he is not the first Black man or person to have been shot or injured or mercilessly killed at the hands of individuals in law enforcement in our state or our country."

Blake's family is being represented by civil rights and personal injury attorney Ben Crump, the lawyer confirmed in a statement Monday. Crump is also representing the families of Floyd and Breonna Taylor, who was killed by Louisville police in March.

"We all watched the horrific video of Jacob Blake being shot in the back several times by Kenosha police. Even worse, his three sons witnessed their father collapse after being riddled with bullets," Crump said. "Their irresponsible, reckless, and inhumane actions nearly cost the life of a man who was simply trying to do the right thing by intervening in a domestic incident. It's a miracle he's still alive."

"We will seek justice for Jacob Blake and for his family as we demand answers from the Kenosha Police Department," the attorney vowed. "How many more of these tragic 'while Black' tragedies will it take until the racial profiling and undervaluing of Black lives by the police finally stops?"

Crump, co-counsels Patrick Salvi and B'Ivory LaMarr, and Blake's family will hold a news conference Tuesday at 3:00 pm local time at the Kenosha County Courthouse. According to the attorneys, "The family will address Jacob's current condition and their plans moving forward following the latest occurrence of excessive police force against the young Black man."