5 accidentally revealing lines from Trump supporters at the RNC 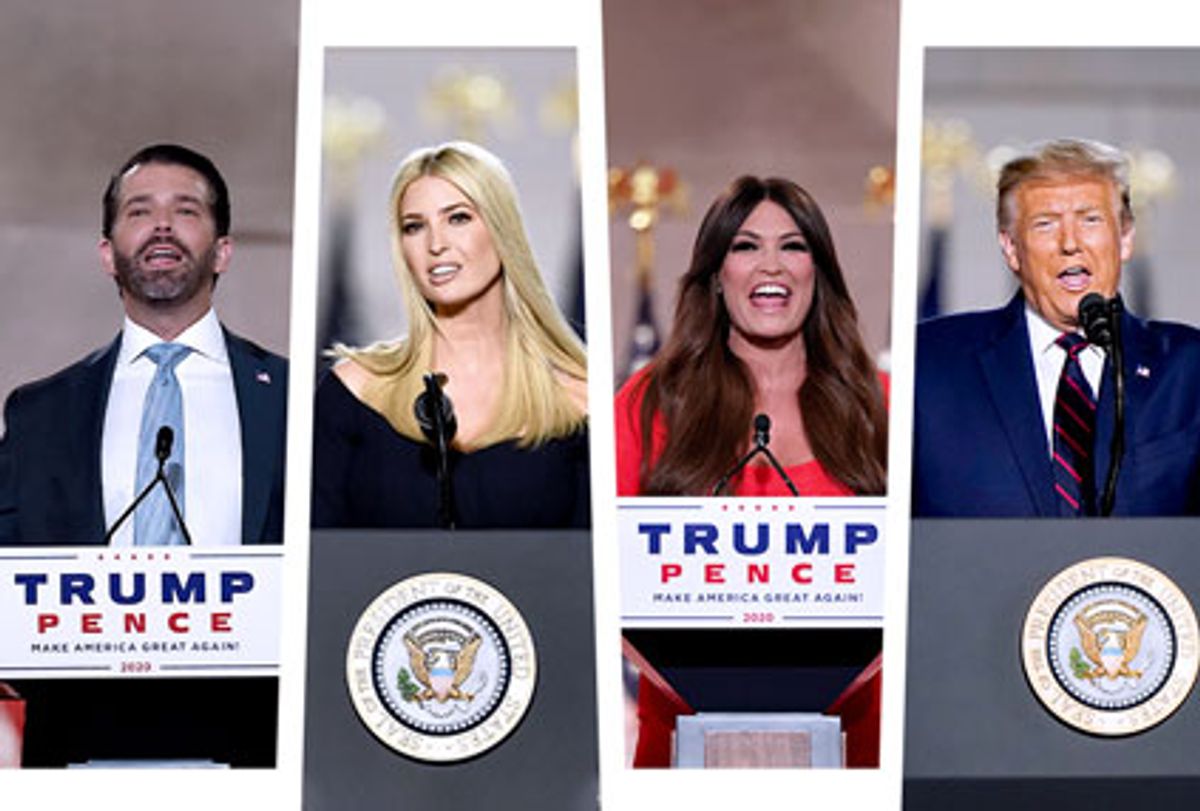 Unsurprisingly, the Republican National Convention was filled with lies about President Donald Trump, his administration, the Republican Party, and the Democrats. But on occasion, the speakers slipped some truth into their speeches.

And on some of those occasions, the truth seemed to come out unintentionally. Or at least, the speaker's wording left open the possibility of interpreting it quite differently than was intended.

Here are five claims from RNC speakers that were accidentally revealing:

1. Ivanka Trump: "The results speak for themselves."

"I recognize that my dad's communication style is not to everyone's test," she said. "And I know that his tweets can feel a bit unfiltered. But the results? The results speak for themselves."

This line seemed to play well with the Republican convention attendees, but it's not the best argument for the Trump administration to push. Just consider the setting: An RNC held at the White House, in violation of the law, in part because of the still-raging pandemic. As for the most objective measures of how the country is doing: Coronavirus deaths have crossed 180,000. Unemployment is still in the double digits. Protesters, police, and vigilante militias are clashing in the streets.

Trump and his allies think they can spin all these facts to their advantage. And maybe they can. But they certainly don't speak for themselves.

2. Kevin McCarthy: "Joe Biden and Kamala Harris think this election is about the government. They're wrong."

I really had to listen to this one a few times to make sure he said what I thought he said. He did.

He went on to say that the election is about "your family and your future." But fundamentally, the reason you have an election is to select a government that can best represent and protect the interests and values of you and your family.

But the truth is that for much of the GOP, McCarthy is right. They're not really interested in how to run a functioning government. They use the government for the purposes they care about — like cutting taxes for corporations — but otherwise, they'd prefer to sit on their hands. And the way they often run their campaigns is to make elections about a bunch of issues that aren't really the subject of what the government is responsible for — Trump, for instance, doesn't really have much firsthand responsibility for levels of violence in American cities — but that they think play well with their base voters. For example, many speakers at the convention spoke about school choice, but that's a policy that is most enacted at the local level; the president has little involvement in it. The point is to stir up the culture war to get other Republicans mad and to the polls, even if there's really not much the government can do about who says "Merry Christmas" instead of "Happy holidays."

Democrats, on the other hand, tend to be actually interested in the things the government can do for people, like expanding health care, regulating industry, and fighting climate change.

It's not clear if the closing line to Pence's speech was supposed to be funny, but it drew mockery and bewilderment from many observers.

It betrayed the fact that the Trump campaign had planned on running with the 2020 slogan, "Keep America Great." But they quietly dropped that phrase, given that the pandemic and the recession meet no one's definition of "great."

"Make America great again, again," implicitly acknowledges that things aren't so great right now under Trump. Pence apparently wants us to believe that we should give the president another chance with a second term. But even if you believe the dubious case that Trump did make the country great again in his first three years, why shouldn't we assume he'll just mess it up again at some point in the next four?

4. Dana White, the president of UFC: "Let's re-elect President Trump. Let's figure out what the problems are and continue to find solutions."

Many observers pointed out that this phrasing put the cart before the horse. Why should we be confident Trump is the solution to our problems if we don't even know what the solutions are? Shouldn't the Trump campaign be telling us what its solutions to the nation's central problems are before we're expected to re-elect the president?

Like the McCarthy quote, the White quote just shows that even in the views of Trump allies, the governance questions and policies choices are beside the point. The point is to elect Trump. They hope voters will vote for him because of what he's seen to represent, and they want voters to do it because it will guarantee them power. They can figure out the messy business of running the federal government later.

5. Trump: "We laid off workers in Michigan, Ohio, New Hampshire, Pennsylvania, and many other states. They didn't want to hear Biden's hollow words of empathy. They wanted their jobs back."

And: "Joe Biden claims he has empathy for the vulnerable. Yet the party he leads supports the extreme late-term abortion of defenseless babies right up until the moment of birth."

Trump greatly distorted Democrats' view of abortion here, but the fact that he mentioned "empathy" twice in his speech — both in reference to Biden — was a big tell. He didn't mention it at any other point in the speech.

Clearly, he was reacting to the Democratic National Convention, which focused heavily on Biden's personal character and how he related to other people. It showed Biden as a deeply compassionate and empathetic person, drawing a contrast with Trump.

Trump wants to blunt those criticisms. But in taking it on so directly, he revealed that the attacks made him nervous. He knows that Biden comes off as more personable and caring, and that's probably why many RNC speakers tried unconvincingly to portray a softer side of Trump and downplay his rough edges.