Trump's signal to his followers is clear: Violence and chaos are my only hope

Armed men in pickup trucks are "Great Patriots!" according to our president. He's drooling for mob violence 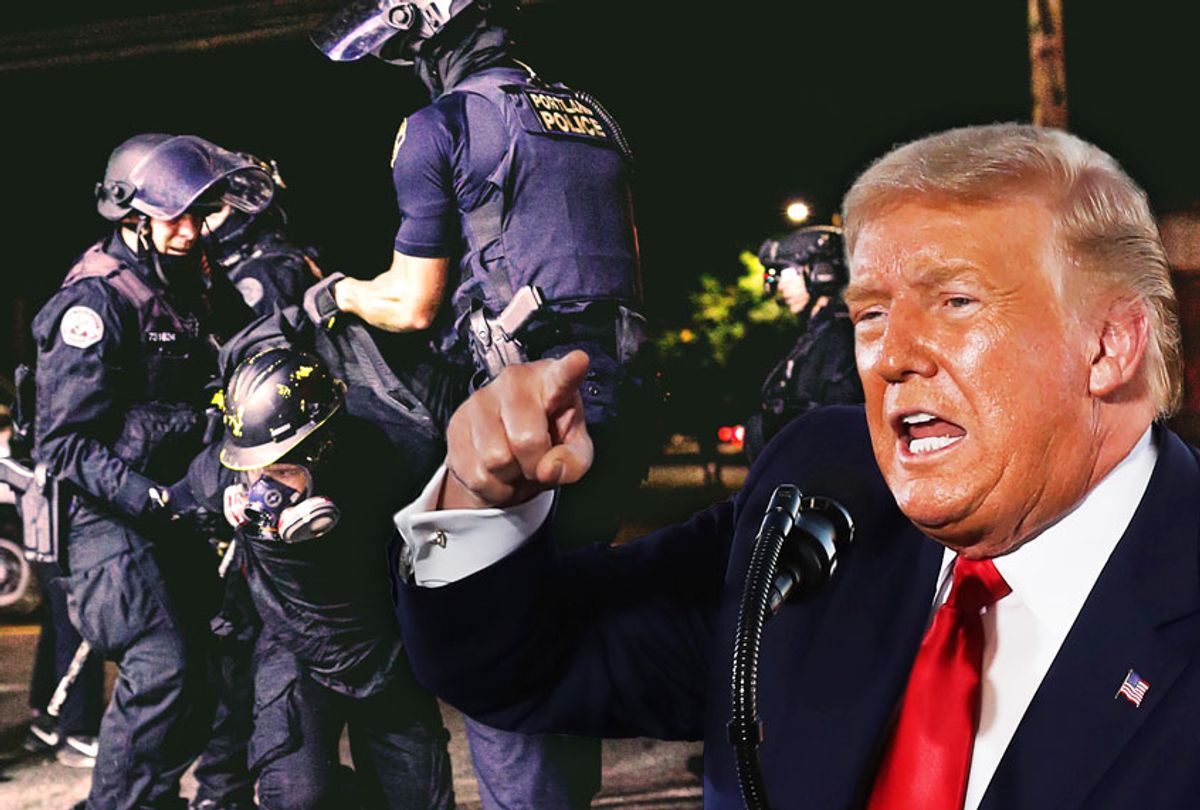 President Trump was having a normal one on Sunday morning, tweeting and retweeting 89 times over the course of three and a half hours. Many of them were tweets of polling numbers from obscure firms showing him in the lead after the Republican convention. But most of the tweets and retweets were incitement to violence among his true believers and complaints about "Democrat cities," an ongoing mantra which he seems to think is a slam dunk to get him re-elected.

He repeatedly insulted and mocked Joe Biden, of course, and Portland, Oregon Mayor Ted Wheeler will undoubtedly have to change his phone number after the president of the United States posted it on Twitter so his followers could call and demand his resignation.

He also showed support for one of his fans in Wisconsin:

It was a manic tweet spree and one that couldn't have show the president's state of mind any more clearly. Biden has said Trump is "rooting for violence," and I don't think anyone can reasonably argue with that.

In fact, Trump's surrogates are saying it right out loud. Fox News' Chris Wallace asked Trump campaign adviser Lara Trump whether she agreed with White House counselor Kellyanne Conway's assertion that "the more chaos and anarchy and vandalism and violence reigns, the better it is for the very clear choice on who's best on public safety and law and order." Lara answered, "Well, I think it paints a very clear picture." She might as well have said, "You go, boys!"

On CNN on Sunday, Sen. Ron Johnson, R-Wis., agreed with Trump that the shootings by a 17-year-old Trump fan last Tuesday night in Kenosha were understandable:

What the president did was he offered to surge manpower and resources so the violence could end. The governor did not accept that that day, that night tragically two people lost their lives because citizens took matters into their own hands. I'm not for vigilantism. I'm not sure that's what was happening. People felt, because the governor — local officials were looking for help. The governor did not accept the help, and so there was not the resolve to end the rioting, and so people took matters into their own hands, and that's what ended up happening. People die.

Johnson is confused about everything, as usual. Trump publicly berated Wisconsin Gov. Tony Evers for failing to call in the National Guard hours after Evers had already done so, telling his followers that Evers wasn't protecting the city. Johnson basically said that people felt they needed to take matters into their own hands because the president had lied to them and told them the governor wasn't protecting them. Yet somehow he's against vigilantism. Everything about that is a grotesque inversion of anything one could call "law and order."

Trump was at it again later on Sunday, tweeting in response to a press conference by Wheeler, the Portland mayor. Trump called him a "dummy" and ranted on, saying, "He would like to blame me and the federal government for going in, but he hasn't seen anything yet. We have only been there with a small group to defend our U.S. courthouse, because he couldn't do it."

Conway's little gaffe in which she admitted that the White House and the Trump campaign believe street violence is good for them illuminates the president's fanning of the flames. He has finally grasped that he cannot unilaterally sending in a bunch of federal cops, as he did in Washington to stage his photo-op last June. Instead, he's not-very-subtly signaling to his gun-toting fans that they are going to have to take action on their own if they hope to scare people into voting for him. Leave the propaganda to him, just ramp up the chaos.

He tweeted that MAGA "protesters" who came to Portland in a caravan on Saturday night were "Great Patriots!" and later explained why their behavior was understandable:

The Atlantic's Ron Brownstein wondered on Twitter whether "suburban voters look at these pictures and say, 'yes, where I belong is in the same political coalition as men who crowd into pickup trucks w/guns, as in Bosnia 1998 or a Third World dictatorship?'" (Those huge flags flying behind them reminded me of men crowded "into pickup trucks w/guns," as in news photographs of ISIS fighters.)

It's a jarringly familiar sight, but it doesn't look like anything we've seen in America before.

There was an actual shooting that night and someone died. It's unclear what exactly happened. But it is very clear that this kind of confrontation is something that Trump and his henchmen are actively stoking for political gain..

As I wrote on Friday, this is hardly the first time Trump has deployed crude, racist fear-mongering. He's been doing it for years, going all the way back to the full-page Central Park Five ad. If it isn't marauding gangs of Black teenagers, it's Muslim terrorists or Mexican rapists or left-wing anarchists. There's always some bogeyman coming to get you.

The only thing he knows how to do is point a finger at "the other" and then promise people that he's the only one who can save them. He feels confident that he's got the troops to back him up, one way or the other. He gave an interview with Breitbart back in 2019 in which he made this explicit:

Yes, it would be very bad. The question is whether or not anyone will believe that Donald Trump is the man who can save America from all this mayhem he is creating. After all, he's been promising to do that ever since he came down that elevator. Here he is at the 2016 Republican convention:

I guess that's yet another promise he'll fulfill after he makes America Great Again — Again.