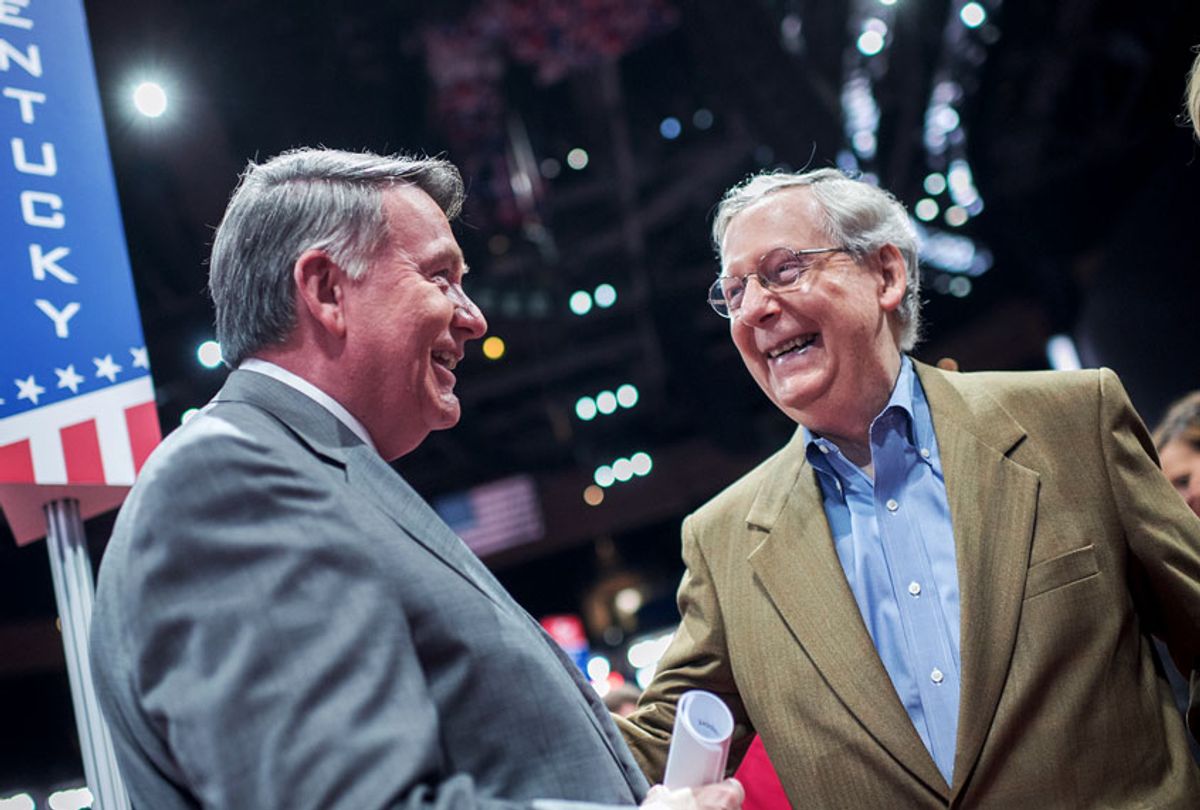 The chairman of the U.S. Postal Service board of governors also serves as a director of Senate Majority Leader Mitch McConnell's $130 million super PAC, according to a new corporate filing in Virginia.

Robert "Mike" Duncan, who testified alongside embattled Postmaster General Louis DeJoy before the House last week, was listed in the document as one of the directors of the Senate Leadership Fund, which has spent millions trying to defend vulnerable Senate Republicans.

Duncan, who also served in the George H.W. Bush White House, is the former chairman of the Republican National Committee. He served on the RNC from 2002 to 2009, during which time the party "supervised an unprecedented escalation of voter disenfranchisement efforts in swing states ... [including] manipulating mail-in votes," HuffPost has reported.

Duncan was appointed by Trump, who has been accused of trying to sabotage the postal system in an effort to undermine an expansion of mail-in voting ahead of the election.

Duncan is one of numerous top officials at the USPS with ties to Trump, including DeJoy, who was a top RNC official and has donated millions to Trump and the Republican Party.

Duncan has drawn increased scrutiny over the process that led to DeJoy's selection after policy changes made by DeJoy were blamed for a nationwide mail slowdown.

DeJoy was chosen by the board of governors even though a firm hired to vet candidates did not recommend him. Democrats have questioned why he did not go through the same background check as other candidates.

David Williams, the former vice chairman of the board of governors, testified to the House last month that DeJoy was the only candidate interviewed who appeared to be unqualified for the job. Williams said he resigned because of the effects of political influence on the USPS board.

"I had expressed concerns after each of the interviews with Mr. Louis DeJoy," Williams said. "I urged that a background investigation be conducted. And when I resigned, I cited it as one of my reasons for submitting my resignation to Chairman Robert Duncan."

Duncan and DeJoy are just two top officials at the USPS with extensive links to the GOP and Trump. CNBC reported that five of the six members of the board of governors have Republican ties.

A spokesman for the super PACs Duncan serves on denied any impropriety.

"Mike Duncan has been a member of the boards of directors of American Crossroads and Senate Leadership Fund for a number of years, and he continues to serve in that role," spokesman Jack Pandol told CNBC. "Our boards, like most boards, oversee organizational policies, financial management, senior executive compensation and management performance — but are not involved in directing day-to-day operations or projects."

Michael Bromwich, a former federal prosecutor and Justice Department inspector general, argued however that "Duncan is more responsible than anyone for politicizing the USPS."

"He threw DeJoy's name into the Postmaster General selection process," Bromwich wrote on Twitter. "His top priority isn't governing the USPS; it's trying to ensure Trump's re-election and continued Republican control of the Senate."

Others pointed out that McConnell has also been involved in the USPS service woes, blocking a coronavirus relief bill that would provide $25 billion to the cash-strapped agency that House Democrats passed back in May.

The House Oversight Committee said on Monday that it will subpoena DeJoy after he apparently withheld documents from the committee's investigation into the USPS service changes. The committee warned Duncan that he may face a subpoena as well.

"Congress passed a law in 1970 to reform the Postal Service and ensure that it is independent and removed from politics, but President Trump has turned that law on its head," Oversight Committee Chairwoman Carolyn Maloney, D-N.Y., said in a statement last week. "He installed a GOP partisan as Chairman of the Board of Governors, who turned around and inserted his fellow Republican fundraiser as Postmaster General. … Both of these officials are longtime Republican operatives, fundraisers, and mega-donors, and they are overt about their efforts to help Donald Trump win in November. … President Trump is fundamentally degrading the longstanding independence of our core constitutional functions to his own political ends right before our eyes."