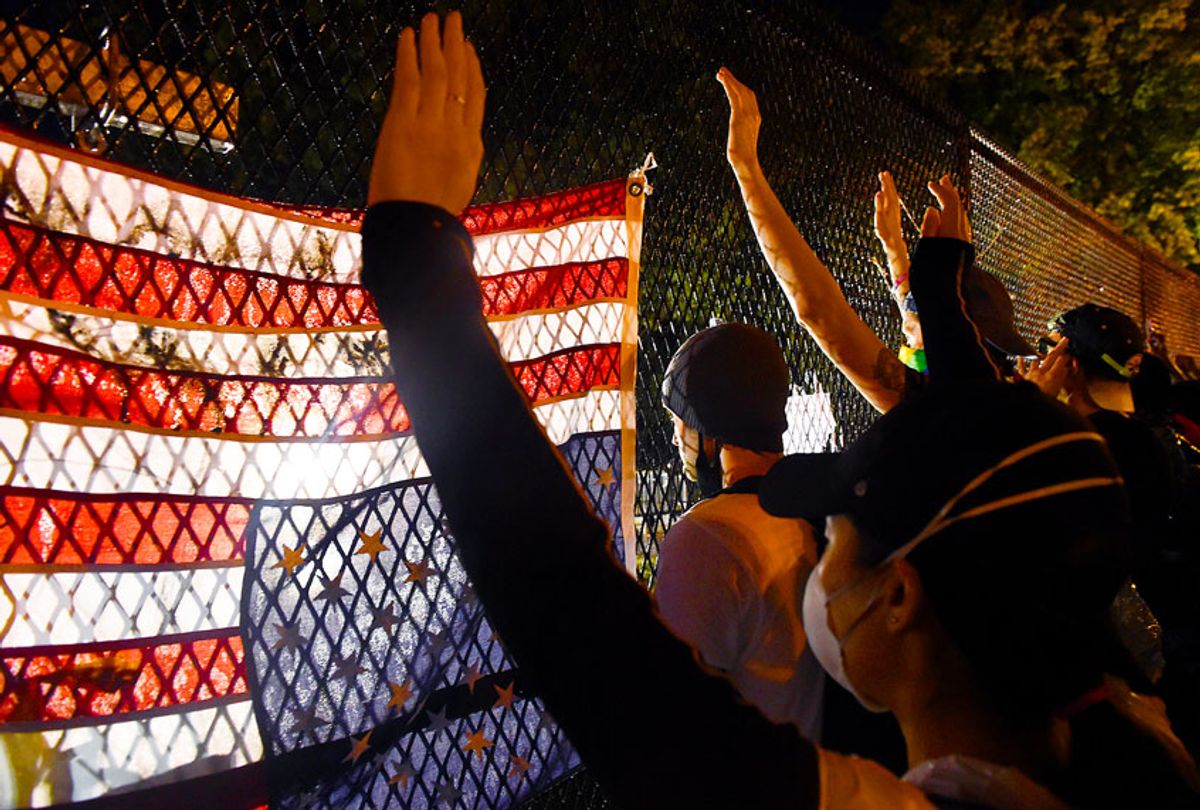 Protesters hold up their hands in front of a recently erected metal fence in front of Lafayette Square near the White House to keep protestors at bay on June 4, 2020 in Washington, DC. (OLIVIER DOULIERY/AFP via Getty Images)
--

The Covid-19 pandemic has resulted in a modest influx of New Yorkers to my town, which is located about 90 miles Northwest of the city. My new next-door neighbors just moved up from Brooklyn this month. As one of them told me the other day, they made the move because they are now able to work remotely, and it made sense to get out of the city because they could rent an entire three-bedroom house for less than they had been paying for a cramped two-bedroom apartment.

Speaking over the fence that separates our backyards, my new neighbor explained that because of the outbreak, she and her partner weren't comfortable enjoying the city's restaurants, nightlife and cultural attractions–those that remain open–and said, "there's no point paying a fortune in rent to sit at home and watch Netflix." They're now considering getting a dog.

Crime didn't enter the picture, and with good reason. According to NYPD data, there were 1,021 fewer major crimes in the city in June and July than there were during the same period in 2019. It's true that there were 29 more murders, in a city of 8 million people, during those two months than there were last year–a figure promoted relentlessly by the conservative media–but there were also 39 fewer rapes, 107 fewer assaults and 284 fewer robberies.

Despite the uptick in homicides, likely a result of months of quarantine, the city is on pace to have 400 murders this year, which would be 270 fewer than New York experienced in the final year of Rudy Giuliani's term as Mayor. Yet during the Republican National Convention, Giuliani claimed that "murders, shootings, and violent crime are increasing at percentages unheard of in the past."

Having failed to contain a historic public health crisis and ensuing economic downturn, the Republican Party is running on a big lie, claiming against all evidence that "Democrat-led" cities are rife with crime and rioting and chaos, with fearful (white) residents fleeing in droves to safer locales in the suburbs. Every aspect of this storyline is completely divorced from reality.

While the right mocks the very idea of peaceful protests, riots have in fact been scattered, localized and in many cases caused by overly aggressive policing, as you can see from videos collected by The New York Times. People are angry about racially discriminatory policing, but in many communities, it's pretty clear that the cops are even angrier about being held accountable. Almost all of the turmoil in Portland has occurred in a small area around the federal courthouse after dark. The city isn't on fire, and most Portland residents are living their lives unaffected by the protests. The dynamic has been similar in Seattle and other big cities.

Let's also point out that most big-city governments are controlled by Democrats. That's true of the safest and the most dangerous cities, the ones with the best and the worst finances and those with the most and least tension between cops and the communities they police–they're almost all "Democrat-run." Big cities are diverse, and Republicans rarely win elections in localities with significant non-white populations.

Also keep in mind that violent crime in the United States has seen a long and steep decline over the past 25 or so years. According to the Bureau of Justice Statistics, violent crime dropped by 71 percent between 1993 and 2018. Property crimes also fell by 69 percent over that same period. This is vital context for any short-term uptick in crime that some communities may be experiencing as we reopen our economies.

But this narrative that American cities are smoking ruins or are being destroyed by criminals and looters has become Trump's–and the GOP's–central argument for 2020, with Fox News playing clips of trash fires and windows being broken on a loop and the Republican National Convention lauding the heroism of a terrified white couple who waved guns at peaceful protesters.

We expect the parties to exaggerate and at times lie during campaigns, but at least in the modern era, no major party has run a campaign that is entirely divorced from any objective reality. In most cases, Republicans aren't even bothering to offer any real arguments. During the convention, there was a throw-away line or two about Biden raising taxes, but that's been pretty much been it.

And this relentless propaganda campaign is getting people killed. Hopped up on the belief that they're saving the country from violent anarchists, the far-right has unleashed an enormous amount of violence and intimidation on Black Lives Matter protesters. The Huffington Post reports that "white vigilantes and far-right actors have shown up to oppose Black Lives Matter protests in the U.S. at least 497 times this year, according to data collected by Alexander Reid Ross, a doctoral fellow at the Center for Analysis of the Radical Right."

The dataset, which Ross shared with HuffPost, documents a staggering amount of violence directed at protesters by the far-right, including 64 cases of simple assault, 38 incidents of vigilantes driving cars into demonstrators, and nine times shots were fired at protesters.

All told, six protesters were hit by vigilante bullets in this summer's violence. Three died from their wounds.

"There just isn't really anything to compare it to," Ross told HuffPost. "I've never seen anything like this in my life."

Such incidents are so common that they often don't make national news. Last week, a Pennsylvania man shot and wounded a member of a group of people marching to Washington to protest without any preamble–there was no confrontation preceding the attack. And yet the incident didn't make a ripple in the national news. And after the RNC celebrated the McCloskeys' armed defense of private property, 17-year-old Kyle Rittenhouse traveled to Kenosha multiple times, ostensibly to protect a gas station, and committed violence against that city's residents, culminating in the alleged murders of two of them.

And making matters worse is that Trump refuses to condemn the violence from the far-right because doing so would undermine his mendacious claim that leftists are responsible for a lion's share of the mayhem. As Lilliana Mason, a professor of government and politics at the University of Maryland, pointed out, research "exposing subjects to quotes from Trump or Biden explicitly rejecting violence" has found that "when leaders reject violence, partisans reject violence. When leaders say nothing, partisans endorse violence."

Donald Trump doesn't have much to run on. His desperate attempt to shift the national conversation from the Covid-19 crisis and resulting recession to widespread chaos in American cities is a Hail Mary pass that's getting people killed.