Trump has flirted with right-wing vigilantism for years. His re-election strategy seems to be a full-on embrace 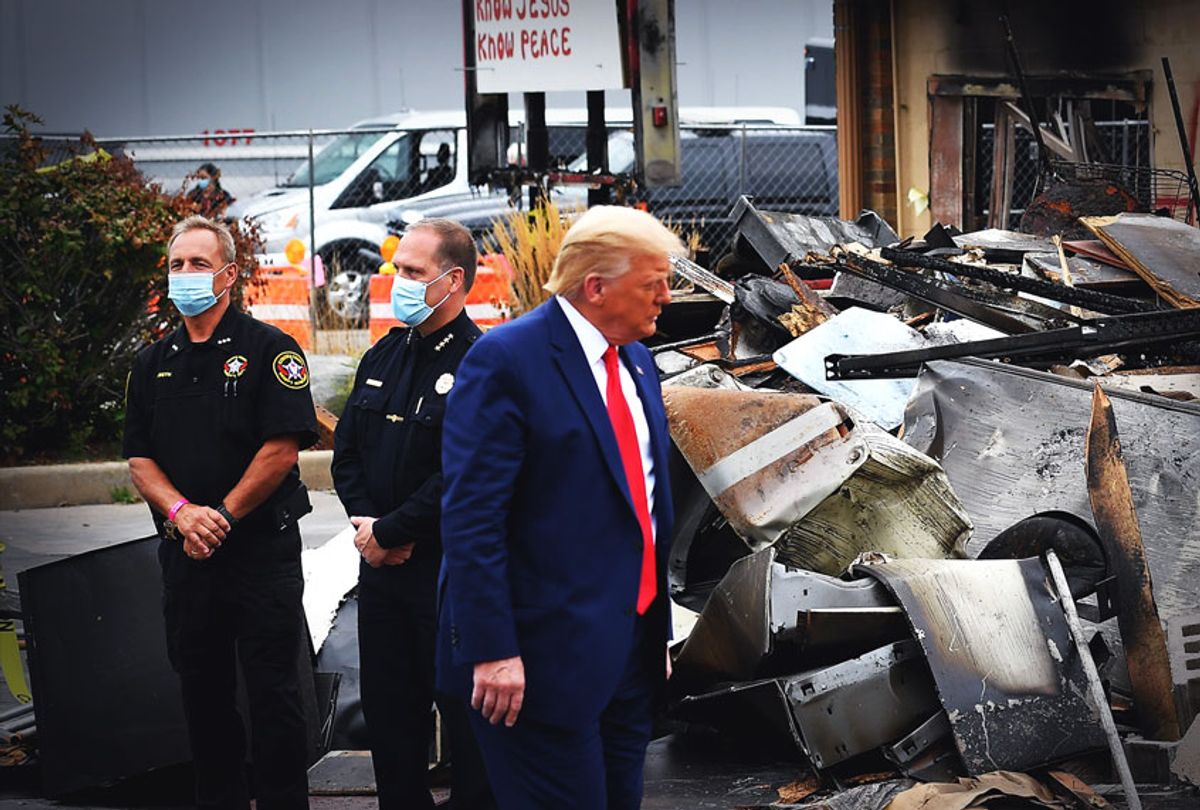 US President Donald Trump tours an area affected by civil unrest in Kenosha, Wisconsin on September 1, 2020. - Trump visited Kenosha, the Wisconsin city at the center of a raging US debate over racism, despite pleas to stay away and claims he is dangerously fanning tensions as a reelection ploy. (MANDEL NGAN/AFP via Getty Images)
--

In the aftermath of tragedies and disasters, the country naturally turns to the president for words of reassurance. Whether it's a mass shooting or a terrorist attack or a hurricane — all events that happen more often than we'd like — the president is called upon to comfort those directly affected and bring the nation together to face whatever the aftermath might be.

Depending on your political bent, you might think of Ronald Reagan after the Challenger explosion saying, "We will never forget them as they 'slipped the surly bonds of earth' to 'touch the face of God.'" Or maybe George W. Bush standing in the rubble of the World Trade Center or speaking at the Islamic Center of Washington six days after the attacks to quote from the Quran and declare that "Islam is peace." I think of Barack Obama singing "Amazing Grace" after the Charleston church massacre and Bill Clinton after the Oklahoma City bombing, saying, "You have lost too much, but you have not lost everything. And you have certainly not lost America, for we will stand with you for as many tomorrows as it takes."

This is a big part of the job that presidents are required to perform, and certainly some are better at it than others. But no president has ever been as terrible at the task as Donald Trump. He is simply incapable of being empathetic or reassuring. He doesn't even try. Instead of trying to bring the country together in a time of almost unprecedented stress and trauma, he has decided to intensify the nation's anxiety for his own personal and political gain. If there's ever been a more cynical election strategy I can't think of it.

Trump and his campaign are making no secret of the fact that they believe protests and civil unrest will make people vote for a second term and so they are stoking the discord as much as possible. They think they can finesse his administration's disastrous response to the deadly pandemic and the resulting economic catastrophe by ginning up chaos in the streets and focusing people's attention away from the other problems in their lives and aiming their anxiety at Black Lives Matter protesters, progressives and big cities.

Trump's comments in interviews and press briefings have been downright puerile and weird in the last few days, passing on bizarre conspiracy theories about black-clad thugs on planes and accusing Joe Biden of being on drugs. His incoherence has undermined whatever claim he might have to be in control.

The president traveled to Kenosha, Wisconsin, on Tuesday, the site of the most recent police shooting of an unarmed Black man. This time the man was Jacob Blake, shot seven times in the back just inches from his three young children. This city of 100,000 on Lake Michigan has of course also been the site of subsequent protests and violence, including the incident when a Trump follower shot three people, killing two of them, and the police let him walk right past them, with the murder weapon slung across his chest, to drive home to his mother's house in neighboring Illinois.

Any other president would have gone there to speak to the victims and their families. Certainly you would expect him at least to meet with leaders of the Black community leaders and local elected officials to hear their issues and discuss possible federal help. But he didn't.

Instead, Trump made excuses for vigilante Kyle Rittenhouse, suggesting in a press briefing that he sympathized with Rittenhouse rather than his victims. In Kenosha, flanked by Attorney General Bill Barr and acting Homeland Security Secretary Chad Wolf, Trump met with law enforcement to praise their great work. He made excuses for the police officer who shot Blake seven times by saying, "They choke sometimes and it's a very tough situation — it's very tough, and then people call them bad and horrible."

It's hard to believe that no one has told Trump that using the word "choke" in this context, in the wake of George Floyd's killing in Minneapolis, is the poorest possible choice. He probably wouldn't care. In his interview with Laura Ingraham the previous night, the president actually compared police officers "choking" in this way to a pro golfer missing a putt.

Trump toured of businesses that were burned during the first night of protests and promised to help them rebuild. (One proprietor refused to participate in this photo-op, so the previous owner was recruited to play along.) But the real point of the visit was the roundtable meeting with a group of white, male law enforcement officers.

Trump ostentatiously told the assembled lawmen that they could feel free to remove their masks and then announced that "Kenosha has been ravaged by anti-police and anti-American riots" and that "reckless far-left politicians continue to push the destructive message that our nation and our law enforcement are oppressive or racist — they'll throw out any word that comes to them." He proclaimed, "These are not acts of peaceful protests, but domestic terror."

It's interesting that he chose that term. We've learned recently that the Department of Homeland Security has tried for years to get Trump to pay attention to domestic terrorism, which he has consistently ignored. Experts in the department considered this a dangerous and growing threat — but of course the domestic terrorists they were warning him about aren't from the far left. They are those our president considers "very fine people" — like Kyle Rittenhouse and the Charlottesville rioters and far too many others.

Trump has always been fond of right-wing vigilantes. I wrote during the 2016 campaign about his vigilante fantasies, in which he led crowds in chants of "Death Wish" (after the 1970s Charles Bronson film, the only kind of pop-culture reference he understands). And we know how much he reveres the police, going back decades:

Maybe it seems odd that Trump would be such a big supporter of law enforcement while at the same time ignoring the domestic terror threat from the far right. But from his perspective it makes sense. He believes they are on the same side against a common enemy: racial minorities, feminists, immigrants, liberals, Muslims — all the usual suspects. Unfortunately, he isn't entirely wrong. They are more formally allied than we might realize.

This week the Brennan Center released a report on the known connections of law enforcement officers to violent racist and militant groups. Noting that the FBI has reported that white supremacists pose a "persistent threat of lethal violence" that has killed more people than any other category of domestic terrorism in the last 20 years, the report also details that the groups the FBI investigates often have "active links" to law enforcement officials. They make up a small percentage of police, to be sure, but it's alarming they are tolerated at all.

Trump is channeling a growing threat of far-right violence and injecting it into the mainstream as he runs for re-election. He spoke of "American carnage" on the day he was inaugurated but we didn't know at the time he was talking about his 2020 campaign strategy. Let's hope it doesn't turn out to be one of his "promises made, promises kept."