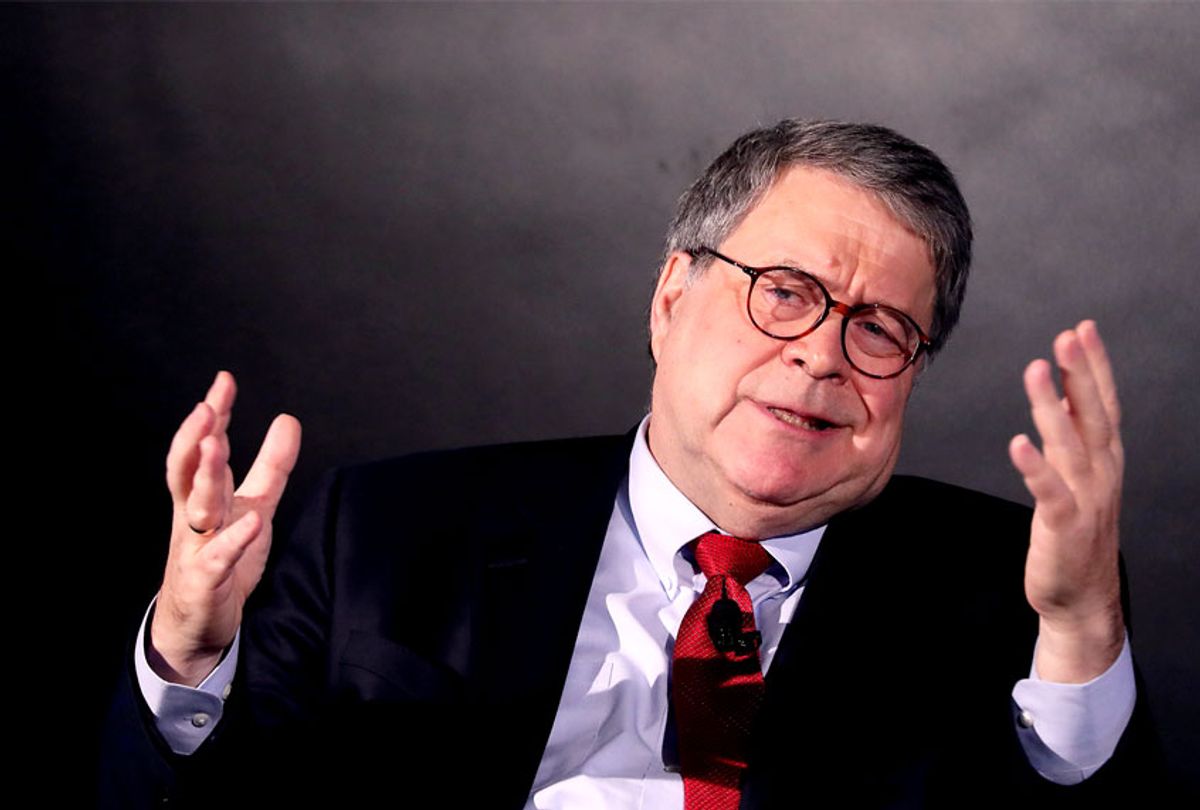 In a new interview with CNN on Wednesday, Attorney General Bill Barr showed stunning levels of arrogance, partisanship, and contempt — falling short of even the extremely low expectations he has already earned.

Host Wolf Blitzer started off the interview, rightly so, by challenging Barr to explain whether President Donald Trump's recent comments about the Justice Department's investigation into the origins of the Russia investigation were appropriate.

Trump recently said: "Bill Barr can go down as the greatest attorney general in the history of our country, or he can go down as just another guy. It depends." He also said: "I hope they're not going to be politically correct, and I hope they do what, because the fact is this was President Obama knew everything, Vice President Biden, as dumb as he may be, he knew everything, and everybody else knew everything. They spied on my campaign, which is treason, they spied both before and after I won."

Barr smirked when these comments were played for him, suggesting there was nothing inappropriate about it and that he felt no pressure from the president. He said the president didn't talk that way to him in private. But of course, as Barr is well aware, Trump fired the previous attorney general precisely because he didn't follow his orders to protect him and go after his enemies — orders that were often stated in public and in tweets.

The attorney general also noted that he has held a press conference confirming that neither Obama nor Biden are under investigation. But that doesn't change the appropriateness of Trump's comments, which clearly do place pressure on Barr — even if he resists — to take action against Biden and Obama.

Blitzer continued to press: "Is it appropriate for a president to be urging you to launch criminal investigations against his political opponents?"

Absurdly, Barr said Trump wasn't urging a criminal investigation — just that he is "interested in the results" of the "Russiagate thing" — a derisive term the attorney general has used to refer to the Russia investigation.

Then, showing his true partisan instincts, Barr abruptly changed the subject, denouncing Biden and Sen. Kamala Harris (whose name he mispronounced) for calling for charges against officers in the case of the Jacob Blake, "before all the facts are in."

Blitzer pointed out that Trump is accusing Biden and Obama of committing treason. Barr said he didn't think Trump meant "treason" in the legal sense, but colloquially. This is another ridiculous dodge from Barr, and it's just factually bogus. Trump has called the made-up treason "the single biggest political crime in the history of our country," and has said that he hopes the prosecutor reviewing the Russia investigation "is not going to be politically correct and just get a couple of the lower guys."

Undoubtedly, this is much more egregious than Biden and Harris's calls for prosecutions in the case of the Blake shooting. Some might argue that political candidates should never call for charges, but in the case of Blake, the actions occurred on video. Harris herself is a former prosecutor. And neither Biden nor Harris actually have authority over the people making the decisions. Arguably, their calls for charges reflect their political position of how the law should operate, rather than inappropriate political influence on criminal investigations.

In Trump's case, he does have authority over Barr. He's calling for the prosecution of his personal and political enemies, not simply figures in a widely discussed incident. And he doesn't have any clear evidence of the allegation he's making — indeed, it's clear the charge is wholly fabricated. It's a much more egregious abuse that what Biden and Harris did, even if one agrees that their comments were inappropriate. Barr's decision to pivot toward criticizing them while excusing Trump displays exactly the kind of crass partisan attitude that makes the president's attempts to influence criminal cases so deeply troubling.

And Barr has previously admitted that Trump's comments on ongoing cases were inappropriate, saying that the president's tweets about the Roger Stone case made it "impossible for me to do my job." Now, he's apparently backing off that form of criticism, making it clear that the president is able to successfully pressure Barr and change his behavior.

When Blitzer asked Barr about the Justice Department policies designed to avoid taking overt investigative steps that might influence an election, Barr became ever more slippery. Blitzer asked about whether he planned to honor that policy.

Barr's answers seemed to suggest he was committing to do so, but his answer were precisely circumscribed to avoid being pinned down. Asked what the guidance was, Barr said that "people shouldn't do things for political reasons."

This form of such a policy leaves wide open any number of actions from the DOJ that will in fact affect the 2020 election. It's true, as Barr claimed, that this is how the policy has been written in the past. But other DOJ officials have explained that there was an understanding in the department about the need to avoid even the appearance of interfering in the campaign 60 days before an election.

But Barr's explanation suggests that he wouldn't hesitate to take steps that would influence the result of an election. To defend himself, he would just say that his intent wasn't to influence the election, which would technically free him from the bounds of the DOJ's policies. Of course, it would be quite difficult to prove his claims about his own intentions wrong — and the damage would already be done.

There's good reason to doubt his intentions, though, because — in addition to demonstrating the blatant partisanship discussed above — he has already consistently politicized the investigation by U.S. Attorney John Durham, who is reviewing the Russia investigation. Barr has discussed the probe frequently and in great depth, drawing sweeping conclusions without ever providing any evidence. (He also told Blitzer that he does not believe the results of the Durham investigation will impact the 2020 election.) This is blatantly against the DOJ policy against commenting on ongoing investigations. The reason for this violation, though, is quite obviously that he thinks it's to the president's benefit to discredit the Russia investigation. The fact that he is operating on such clearly partisan motivations further undermines his role as attorney general.

Later, Barr claimed that the shooting of Jacob Blake was different from the killing of George Floyd, in part, because Blake was armed. But Blitzer pointed out that his family says Blake was not armed and no evidence indicates he was, though reports say there was a knife in his car. When this was pointed out, Barr refused to concede he was wrong and just moved on.

Barr also went on a tirade dismissing the "American left" and its view of racism in the United States, arguing that it plays a minimal role in police work. And he refused to acknowledge that there is systemic racism in the American justice system, saying the idea that discrimination is "widespread" is "simply wrong." Of course, he has fed into the narrative of a vast conspiracy against Trump from within the Obama administration, a story for which there's almost no evidence compared to the vast amount of data showing racial injustice.

At one point, he blew up at Blitzer over a discussion about mail-in voting. But the nature of his blow-up was particularly revealing.  He had been arguing that advocates of mail-in voting for the November election are risking the vote's security because it's never been done before.

But Blitzer pointed out that five states, including Republican-majority states like Utah, have done universal mail-in voting for years without any major problems. As Blitzer tried to get the explanation out, though, Barr burst with rage.

This outburst, though, only served to distract from the fact that he had no counterargument to Blitzer's point that universal mail-in voting in a well-established practice in this country. His claim that the methodology is flawed a matter of "logic" is essentially an admission that he has no evidence to support his view. And his pleas of concern about confidence in the election ring hollow when the president is undermining faith in the results on a nearly daily basis. Even in this very interview, Barr was bringing up concerns about foreign interference via fraudulent ballots — undermining trust in the election by floating a possibility that is completely unsubstantiated.

In fact, on Wednesday, Trump openly encouraged voters to commit voter fraud — supposedly to test the system's defenses. This is open encouragement of a federal crime. When Blitzer asked Barr about these comments, the attorney general first tried to shrug them off. But when Blitzer tried to explain why they were serious, Barr dismissively said: "If you know what he was saying, why are you asking me what he's saying?" The answer is obvious: Because the attorney general should have something to say about the president encouraging crimes.