Black holes observed in the universe were either relatively small, or extremely massive — until now 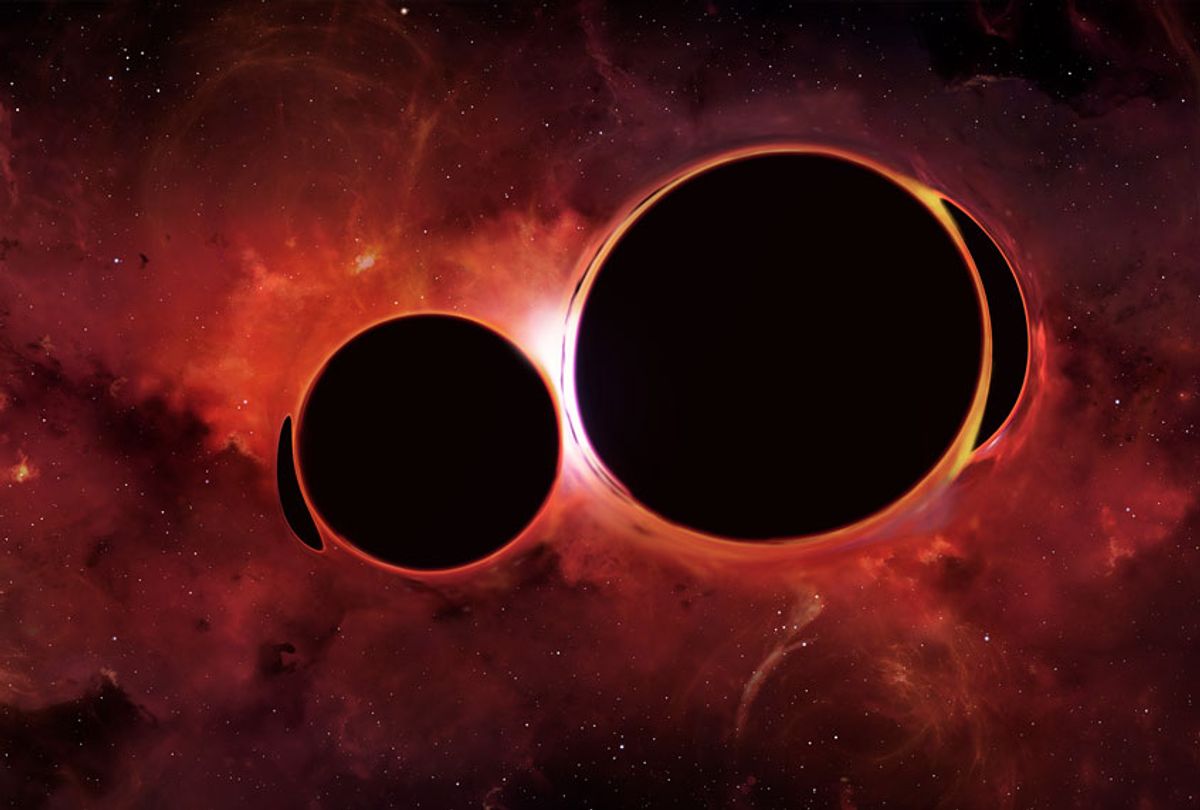 Illustration of two black holes orbiting each other (Getty Images)
--

Astronomers have discovered the most massive black hole collision ever observed, and also the most distant, at 7 billion light years away — meaning it happened when our universe was only half its current age. More intriguingly, the black hole merger originated in two black holes of a size that had never been observed before, according to new research published this week.

Two papers in the journals Physical Review Letters and The Astrophysical Journal Letters detail this unprecedented cosmic show, which provided scientists with conclusive evidence that a third type of black holes exist. One black hole, roughly 66 times the mass of our own sun, collided with a second black hole 85 times the mass of our sun. This collision created one single black hole around 142 times the mass of the sun; the remaining mass was converted into gravitational energy, which created the shockwave felt faintly on Earth 7 billion years later and 7 billion light-years away.

"We have detected a gravitational wave signal which we interpret to come from the merger of two black holes into a larger black hole," Christopher Berry, an astrophysicist, told Salon. "This is the largest black hole that we have discovered with gravitational waves, and is what we would call an 'intermediate-mass black hole.'"

Astronomers have long searched for intermediate-mass black holes (IMBH), Berry explains. Over the years, there have been hints that they've existed, but this is the first time astronomers have unquestionable evidence that they do.

"Up to now we knew of two populations of black holes," Berry said.

Previously, the mere observation of these two classes of black holes — one type being relatively small, around 5 to 20 times our sun's mass, and the others unfathomably massive — suggested that there must be an intermediate stage between the two sizes. Hence, it was curious that astronomers had never found direct evidence of such a black hole. That's what makes this discovery even more exciting, astronomers say.

"You immediately wonder: who are the parents of these two?" Loeb said. "The simplest path to making such black holes is known to every kid who played with LEGO; by combining the small building blocks together, it is possible to construct big objects."

Berry said now that astronomers have detected an intermediate-mass black hole, it's likely more will be detected.

"We can go out and hunt for them, and hopefully as we find more we'll be able to answer: Are the stellar mass black holes and the supermassive black holes connected?" Berry said.

In other words, they're the missing link to better understanding the history of our universe.

The process to discover this long-hunted black hole required scientists to measure the shockwaves that the merger produced, also known as gravitational waves. They are usually hard to detect by the time they reach Earth. But thanks to the observatories known as LIGO [Laser Interferometry Gravitational-Wave Observatory] and Virgo, they've become easier to see. Both observatories do not resemble telescopes in the traditional sense — rather, they resemble stadium-length rooms full of lasers bouncing back and forth off many mirrors. Space-time is distorted by gravitational waves, and thus the laser beams wiggle ever so slightly in response to space-time's perturbations due to gravitational waves stemming from such stellar mergers. By positioning different facilities around the world — LIGO has a facility in Louisiana and one in Washington, and Virgo is located in Italy — scientists can pinpoint the direction and location of such events, as gravitational waves only move at the speed of light and will strike one facility before the others.

In 2015, LIGO made its first detection of gravitational waves. The most recent detection is the farthest merger that LIGO and Virgo have ever found. While it is possible that astronomers picked up waves from a collapsing star or another weird phenomenon instead of colliding black holes, experts are confident in their interpretation of the findings, and that they represent a rare cosmic event.

"The distance of the new event is much larger than most of the events detected before, implying that it is hundreds of times rarer," Loeb said. "Unexpected rare anomalies of this type are exciting because they can teach us something new; I am still hoping for a future event that will not look anything like a merger of two black holes and would imply a completely new type of source, potentially new physics, but like all things precious, such sources appear to be rare."

Berry said that after this latest discovery, astronomers will likely rethink how black holes are created.

"The fact that we have something which looks like a black hole in this mass range indicates that maybe we have a different way of forming black holes than just having them collapse from stars," Berry said.  "It tells us something about potentially how black holes form, that there are more than you might naively expect out there in the universe, and putting this all together is helping us understand exactly how stars live — how they interact with their environments and how the universe behaves."