In Joan Osborne's revolution, you can dance 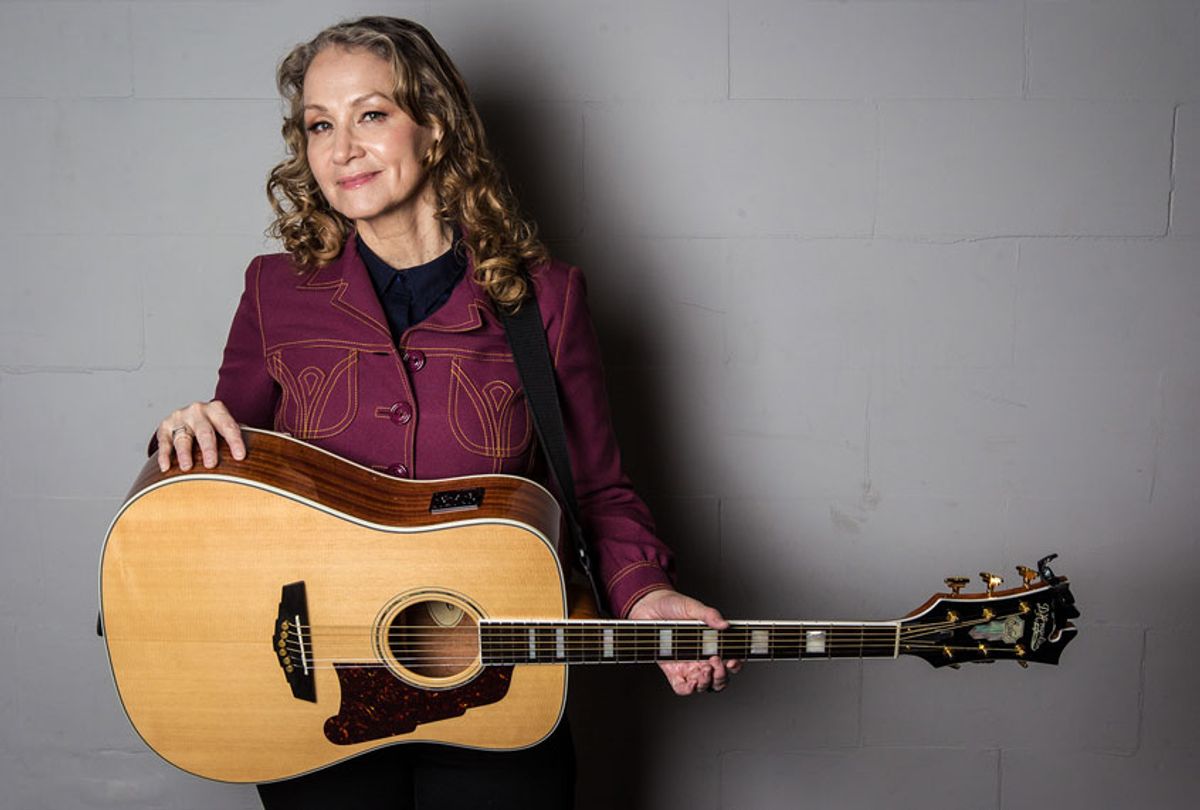 "What is a rebel?" Albert Camus asked after watching the world descend into war, fascism, and genocide in his 1951 book length essay, "The Rebel." "He is a man who says no, but whose refusal does not imply a renunciation. He is also a man who says yes." Every act of rebellion, according to the great philosopher and novelist, not only rejects something, but affirms another. Art is essential to any revolt, because as Camus would explain, "every act of creation denies the relationship of master and slave."

When I recently interviewed Joan Osborne, and quoted the same Camus passage to her, she released a hearty laugh of mischievous delight. "Yes," she answered back, "And Emma Goldman said, 'If I can't dance, I don't want to be in your revolution."

On her new record, Osborne – the forceful and versatile singer/songwriter who often invites comparisons to Janis Joplin – is singing, dancing and protesting for the revolution. "Trouble and Strife," due out on September 18, is her artistic response to the crises and chaos confronting America's fragile democracy. A ten song collection of original material, "Trouble and Strife" addresses everything from climate change to transgender rights, and leaves room for more eternal subject matter of music, like the enduring power of love.

It is impossible to imagine how any sentient being could not think deeply about the current catastrophes afflicting the United States, and Osborne is no exception. When she planned to meet her band in the recording studio, she had no intention of writing a record that leaned heavily into sociopolitical subject matter. Her previous release was an underrated set of Bob Dylan covers. While wrestling with whether to record a Dylan sequel or a Lou Reed tribute, the songs that make up "Trouble and Strife" came to her in spontaneous inspiration, writing all but one of them in four days.

"I locked myself in a room for four days to see how many songs I could write under that pressure, which is highly unusual for me," Osborne said explaining that she typically writes songs over an extended period of time to allow for several rewrites, "And it turned it out to be a response to what is going on in our world, and what is on my mind. It turned out to be a real shoot from the hip record."

"I tend to like when songs are more mysterious," Osborne said. Listeners familiar with her smoldering sexual blues of "Dracula Moon," from her debut album "Relish," or the more recent "Kitten's Got Claws," a ballad of escalating intensity about betrayal, are well-acquainted with the emotional ephemerality of Osborne's oeuvre.

The direct content of "Trouble and Strife," particularly because of the urgency of the times, is still a welcome change. "I'm an adult. I have responsibilities, and I'm a citizen of this country," Osborne said, "I have to think about the world I am leaving my daughter, and I try to do work that will result in positive change – whether it is playing a benefit show, writing my Congressional representatives, marching in a protest, or donating to progressive organizations. I do all of those things as a citizen, but I also have this platform. I know how powerful music can be. So, I began to see it as part of my job to address what's happening in this moment, politically and socially."

Osborne is careful to note that she does not feel any artist has an "obligation" to inject politics into their work, but as a personal declaration, she returned to the word "responsibility," viewing the danger of several issues that threaten America's future as too significant to avoid. "There is a way music can become a tool to help people manage their political responses," Osborne said.

The lyrics of the songs have emotional resonance, because despite their topical content, they never sound as if Osborne parsed the details of the New York Times for inspiration. Having spent time studying the work of Bob Dylan for her previous tribute record, she intuited that the Nobel Prize winner offers a reliable method for artistic engagement with political reality.

"Dylan has an uncanny ability to write songs that use mythical characters, and use Biblical language, to sound as if he is singing about something that is happening right now at this moment, but many of his best songs were written 55 years ago, and they sound as if they were right at that moment too," Osborne said and then explained, "He has a masterful way of using language and characters to create stories that are relevant in many different situations. That's what I strived for."

There are bracing protest anthems on "Trouble and Strife." "Hands Off" has Osborne commanding, with rock and roll rage, corrupt and greedy leaders to remove their filthy hooks from "the fathers, the mothers, the sisters, the brothers, the oceans, the sky." One of the lead singles — "That Was a Lie" — is a scathing rebuke of, in her words, "airbrushed, made up, well lit, well-groomed spokespeople who blatantly lie to us every day."

Despite the strength of the protest songs, the album reaches its highest moments of artistic triumph and emotional resonance when Osborne deftly follows the Dylan model, and creates characters that manage to measure the stakes of struggles over human rights and democracy, while satisfying the Emma Goldman rule, and giving cause to dance.

"We were going for a 1970s AM radio quality," Osborne told me when describing the jaunty arrangements of most of the songs. "When you are feeling discouraged and down, it is possible to go to new music to lift you up to face the challenges we are facing," she said.

"What's That You Say" injects the funk of Bill Withers and Sly Stone into a celebration of a young female refugee. Rather than a story of victimhood, the rhythm and blues of the music, and the joy in Osborne's voice combine with a Spanish language spoken track to emphasize the lyric that the subject of the song is here to "set you free."

Osborne calculates a heavy debt American music owes to the contributions of immigrants, importing their sounds from countries as disparate as Jamaica and Ireland, and in an effort of compensation, she claims that as a musician herself, she has a "job" to "tell that story."

"What's That You Say" inverts the conventional depiction of immigration by making it clear that Americans accrue immense benefits from its multicultural milieu, and nativists insist on homogeneity at their own culture's peril.

The feel-good funk, infectious soul, and raucous rock and roll of the record enables Osborne to effectively introduce characters who when facing down the odds of oppression generate an identity that can lead to the liberation of not only themselves, but their society.

"Boy Dontcha Know" exercises the swagger and sexual rhythm of David Bowie, the Velvet Underground, and T. Rex to make a musical hero out of a young trans boy planning to come out and live as his mind, body, and spirit demand. Rock and roll has always struck a transgressive pose, but often with dubious gender politics. Osborne and band's adept use of a familiar and pleasurable sound to reach a culmination of sexual liberalism, centering on the story of one transgender teenager, feels triumphant.

"Take It Any Way I Can Get It" is an ode to joy in a world gone wrong; a pop-rock anthem in which a danceable groove, bending guitar notes, and Osborne's defiant vocal demonstrate the subversive potential of happiness and pleasure. The reactionary, whether it is Donald Trump, Bill Barr, or the right wing militia member in the street, aspires to freeze his objects of hatred with fear. In the fangs of such a dark and cruel campaign of repression, Osborne sings and dances with gospel jubilation. "We need sensuality and joy and passion and fun," Osborne said, "Because this is a marathon not a sprint. No matter what happens in November, it is going to take a long time to right this ship of democracy that is rolling around in a storm right now. We are going to have to call on every part of our humanity to have the energy and patience to do this work."

None of the songs on "Trouble and Strife" better capture the necessity of patience and persistence than "Never Get Tired (Of Loving You)." With the hospitality and intimacy of the southern soul club genre, Osborne sings of climate change's dystopia— the birds falling from the sky, deserts filling with snow and rivers running into the streets — but through all the trauma and terror, assures her daughter, "I'll never get tired of loving you."

"I certainly wish these things weren't happening, and I'll do what I can to limit the negative effects of climate change, but I cannot control anything," Osborne confessed, "But I can say to my daughter, all of these things may unfold in the future that will be bad, but you can count on me to be here for you no matter what happens."

The profound gift of presence in family, love, art, and movements for justice is at once the least and most that anyone can offer. In "The Rebel," Camus wrote that "a particular arrangement of notes extracts from natural disorder a unity that is satisfying to the mind and the heart."

At a moment of precarity and urgency, when confused, angry, and anxious Americans are in desperate need of satisfaction, Joan Osborne's new record keeps Camus' promise.

An earlier version of this article listed the wrong publication date for Camus' "The Rebel." The story has been updated.