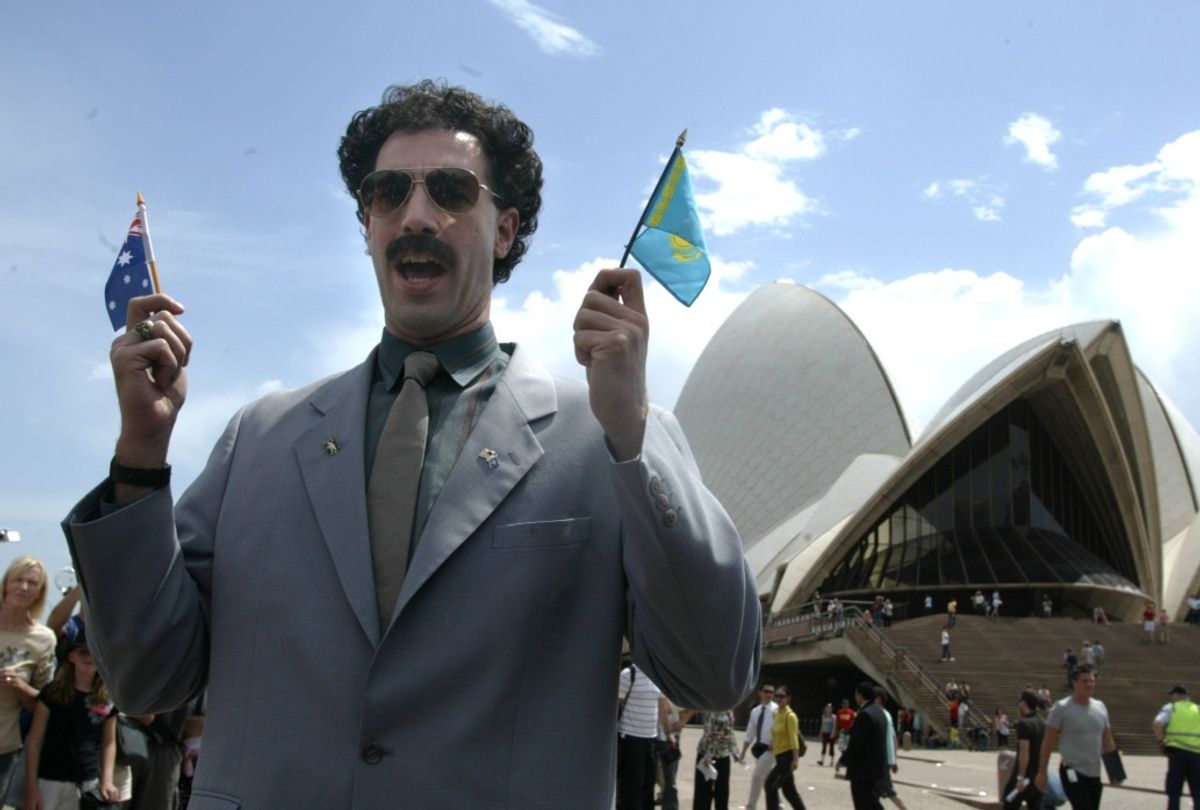 Sacha Baron Cohen as alter ego Borat outside the Sydney Opera House in 2006 before the premiere of "Borat: Cultural Learnings of America For Make Benefit Glorious Nation of Kazakhstan" (Getty Images/Fairfax Media)
--

A sequel to Sacha Baron Cohen's blockbuster 2006 comedy "Borat: Cultural Learnings of America for Make Benefit Glorious Nation of Kazakhstan" has been shot and screened "for a select few industry types," Collider's Jeff Sneider reports based on confirmations from multiple sources. The sources say "Borat 2" finds Cohen's Kazakh journalist "thinking he's a big movie star after the success of the original 2006 film made him famous, so he's trying to hide from the public by pretending to be someone else, and starts meeting and interviewing people incognito."

Cohen has been popping up in the news over the last several months for public pranks, leading many fans to speculate as to whether or not he was cooking up a second season of his Showtime series "Who Is America?" or a new project. At the end of June, Cohen made headlines for crashing a far-right rally in Olympia, Washington and convincing the crowd to sing a racist song with him. The event was a "March for Our Rights 3" rally organized by the Washington Three Percenters, a far-right militia group known for its gun advocacy. Cohen appeared dressed in overalls and a fake beard, and his song included lyrics about injecting kids with the "Wuhan flu."

Another Cohen prank made its way into the news in early July when former New York Mayor Rudy Giuliani revealed to The Post that Cohen ambushed a July 7 interview at the Mark Hotel in New York City. Giuliani believed he was going to be interviewed about the White House's response to the coronavirus pandemic, but in the middle of the conversation with a female journalist a man stormed in "wearing a crazy" outfit that included "a pink bikini, with lace, underneath a translucent mesh top." Giuliani called the prank "absurd."

Near the end of August, a viral Tik Tok video of Cohen dressed in character as Borat speeding down the highway starting making the rounds on social media. The video increased buzz that Cohen would be resurrecting Borat for a sequel, but it was unclear whether or not this would be related to the earlier pranks conducted over the summer. Based on Collider's plot synopsis for "Borat 2," it appears Cohen was filming the sequel this whole time. A source described the project to Collider as "Cohen playing Borat playing Cohen."

"Borat" was a box office winner in 2006, grossing over $260 million worldwide. Cohen won the Golden Globe for Best Actor in a Motion Picture Comedy or Musical, and the film went on to land an Oscar nomination for Best Adapted Screenplay at the 79th Academy Awards. IndieWire has reached out to Cohen's representatives for further comment.