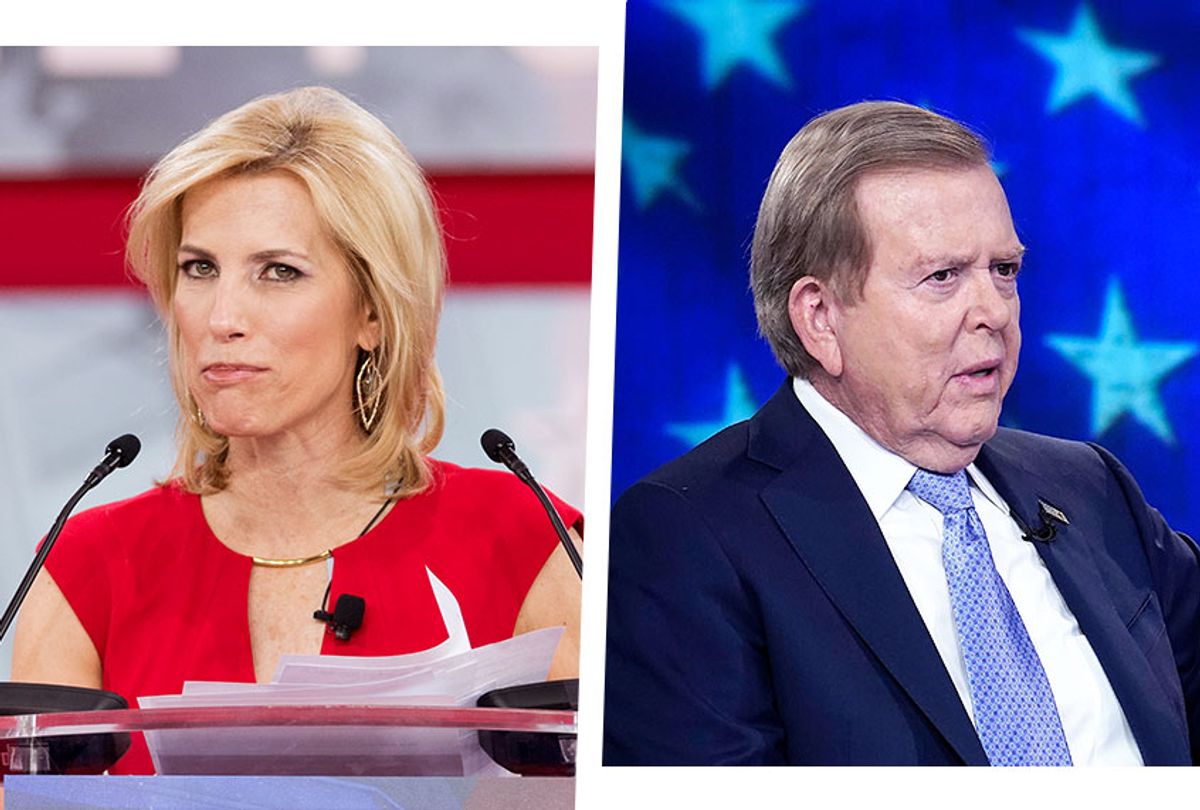 After Fox News confirmed key parts of a bombshell exposé in which advisers close to President Donald Trump revealed to The Atlantic that he had called U.S. military heroes killed in combat "losers" and "suckers," hosts Lou Dobbs and Laura Ingraham on Tuesday attacked the reporting of their own corporation.

Dobbs, of Fox Business, and Ingraham, of Fox News, assailed the "phony" report, with Dobbs calling it a "coordinated attack," "media hit job" and "smear," and both falsely claiming that it had been "debunked," even though Fox News correspondent Jennifer Griffin — citing two anonymous former senior administration officials — also independently confirmed a number of the story's pillars.

Trump later called for Fox News to fire Griffin, tweeting out a Breitbart article indicating that she had not confirmed the "most salacious" part of The Atlantic report.

"All refuted by many witnesses. Jennifer Griffin should be fired for this kind of reporting. Never even called us for comment. @FoxNews is gone!" the president wrote.

"Perhaps more intriguing than the phony details of the story is the level of coordination displayed among the left-wing national media, big tech, Republican RINOs, radical dems and the Biden campaign," Dobbs claimed as he dubbed the reports a "media hit job."

The Fox Business host went on to claim that the story "falls apart under the most elemental fact-checks and is easily refuted by documented evidence and with more than a dozen public sources in the administration" before he criticized Facebook and Twitter for not applying a fact-check label to the report.

Dobbs then called out his own corporation for joining the plenary outlets who also independently confirmed major claims in The Atlantic report.

"The Associated Press claims to have corroborated the story in its entirety, but then didn't have any evidence to corroborate — not a single, single named source. And the Washington Post, CNN, even Fox News claimed to have corroborated parts of the report despite every news organization having not a single named source nor any evidence whatsoever," Dobbs said. "What those unnamed sources did claim doesn't stand up against the 21 Trump administration officials who are now on the record refuting The Atlantic's horrible, horrible lies."

Some on-air Fox News personalities initially pushed back against The Atlantic for leaning entirely on anonymous sources. John Roberts, the network's chief White House correspondent, cast doubt on some of the claims by citing his own anonymous sources in a mixed report co-written with Griffin.

After Trump called for Griffin's firing, multiple journalists on the corporation's "news" side came to her side, while hosts on the "opinion" side, such as Dobbs and Ingraham continued to bash the story. Without offering evidence, Dobbs went so far as to allege that the accusations were a "lie" to support the Biden campaign.

"By pushing the lie that President Trump said something disparaging of our military, the left-wing national media has given the Biden campaign a chance to gloss over the fact that Biden enthusiastically supported the Iraq War — something President Trump outright opposed and that most Americans now see as a terrible mistake," Dobbs said, falsely characterizing Trump's position on Iraq, for which he at one point expressed support.

Later that night, Ingraham echoed his analysis as she also falsely claimed that the story had been "debunked."

"But this is why Biden has sought to capitalize on the now-debunked Atlantic magazine smear against the president despite the fact that the most incendiary claims in that piece have been disavowed by at least 21 current or former administration sources — on the record, by the way," she said.

Jeffrey Goldberg, editor-in-chief at the Atlantic as well as the initial reporter on the story, laid out to MSNBC host Chris Hayes on Monday a number of reasons officials may seek to keep their names off of incendiary reports about Trump.

"I share that view that it's not good enough. But, you know, like other reporters, I'm always balancing out the moral ambiguities and complications after anonymous sourcing with the public's right to know," Goldberg said.

"On the other hand, you are talking about a president who is unlike anything they have ever experienced," he added. "I think there is also fear. I think — and we see this across the board in Donald Trump's Washington — there is a fear on a kind of a superficial level of a Twitter mob. There is also real fear of personal safety, fear for your family, fear for what you put everybody around you through if you started talking about this sort of thing."

Goldberg said that it was "reasonable" for readers to wonder about the strength of anonymous sourcing. At the same time, he seemed to issue a challenge to those sources.

While no officials have gone on the record to confirm the report, some of those who have put their names behind denials have either only come forward as character witnesses with no direct knowledge, or — such as Sarah Huckabee Sanders — have phrased those denials carefully and narrowly.

Asked on The View about Trump's alleged remarks to former chief of staff John Kelly — whom Trump reportedly told, standing over the grave of Kelly's son in Arlington National Cemetery, that he did not understand "what's in it for them" — Sanders only said that she was not nearby.

"I was not standing next to the president for that, no," Trump's former press secretary said. (She also dodged a question on the alleged denigrating comments about the late John McCain from the former senator's daughter, Meghan.)

Like Sanders, who praised what she characterized as Trump's "respect and admiration" for the troops, Dobbs, who has been called an outside adviser to the president, went on to flip the script.

"President Trump's actions and demonstration of respect for the military speak for themselves," he said. "Shame on the left. Shame on the radical Dems. And shame on the fake news and fake journalists who manufacture it."