A spokesperson for CAL FIRE called the news "unnerving" 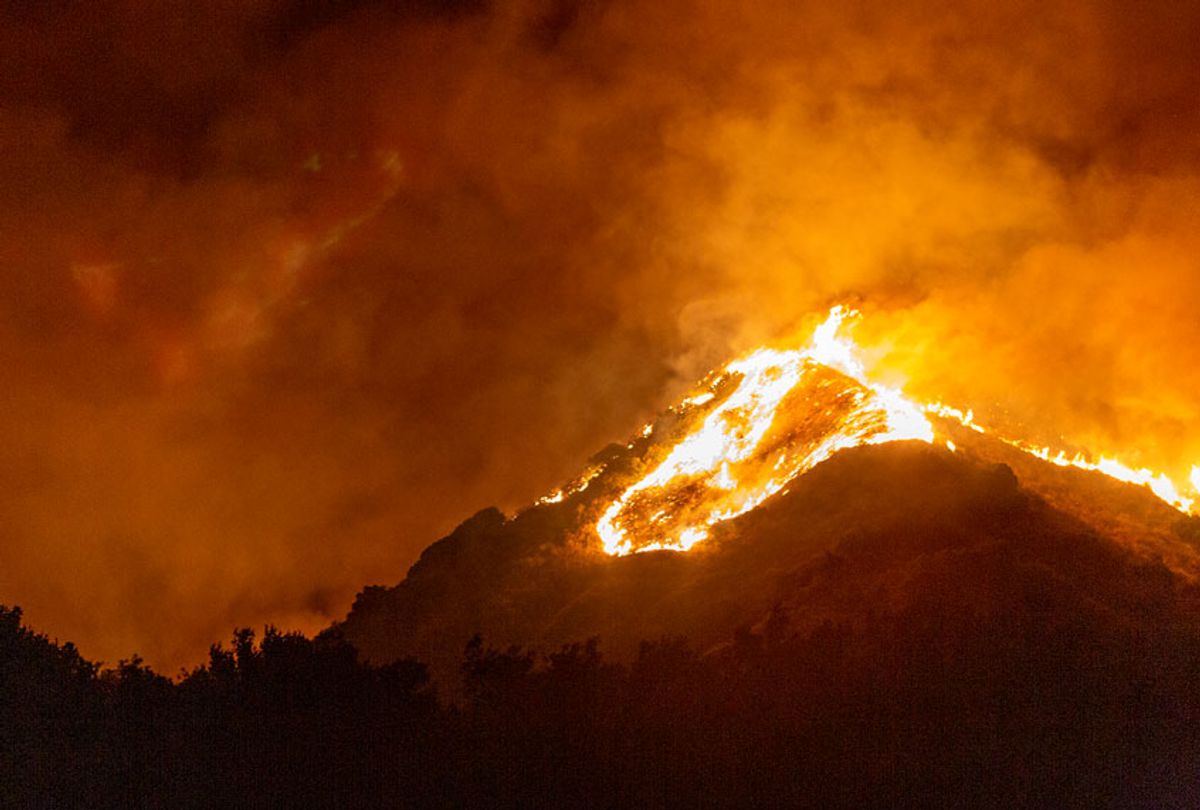 he Maria Fire burns on a hillside as it expands up to 8,000 acres on its first night on November 1, 2019 near Somis, California. (David McNew/Getty Images)
--

California officials announced Monday that this year's ongoing wave of wildfires — which continues to force mass evacuations — has burned over two million acres, a new state record and a revelation that sparked fresh calls for urgent action to address the human-caused climate crisis.

Confirmation of the record came from California Department of Forestry and Fire Protection (CAL FIRE), which said in an update Monday that more than 14,100 firefighters are battling dozens of blazes across the state that have killed at least eight people and destroyed over 3,300 structures.

The previous record was set in 2018, according to CAL FIRE, which began tracking the yearly destruction by acre in 1987. CAL FIRE spokesperson Lynne Tolmachoff noted that the new record came earlier than what is generally the most dangerous period of the state's annual fire season.

"It's a little unnerving because September and October are historically our worst months for fires," Tolmachoff told the Associated Press. "It's usually hot, and the fuels really dry out. And we see more of our wind events."

"This is what a climate crisis looks like," author and activist Bill McKibben, who co-founded the advocacy group 350.org, tweeted Tuesday in response to the record.

"California has always been the canary in the coal mine for climate change, and this weekend's events only underscore that reality," said Democratic Gov. Gavin Newsom Sunday. "Wildfires have caused system failures, while near record energy demand is predicted as a multi-state heat wave hits the West Coast for the second time in a matter of weeks."

"Californians are rising to the occasion to meet these unprecedented challenges for our energy grid, and I want to thank all of the businesses and individuals who are conserving energy," added the governor, who urged state residents to heed the guidance of the California Independent System Operator (CASIO).

USA Today reported on the Democrat's warnings to state residents and recent actions related to the fires:

Newsom urged state residents to keep their thermostats at 78 degrees or higher, to use appliances sparingly, and to keep lights off whenever possible.

Newsom has declared a statewide emergency and secured a Presidential Major Disaster Declaration to bolster the state's emergency response. He also issued an emergency proclamation for the counties of Fresno, Madera and Mariposa, which are fighting the Creek Fire; for San Bernardino County, which is battling the El Dorado Fire; and for San Diego County because of the Valley Fire.

Over a Labor Day weekend that culminated in the Pacific Gas & Electric Company (PG&E), California's largest utility, shutting off power to an estimated 172,000 customers, the state saw historic temperatures from a scorching heatwave, 50,000-foot smoke plumes from the fires, and dramatic rescue efforts in a U.S. national forest.

"The wildfire situation throughout California is dangerous and must be taken seriously," Randy Moore of the U.S. Forest Service's Pacific Southwest Region said in a statement Monday, announcing the closure of all eight national forests in the area and campgrounds statewide as well as a prohibition of the use of any ignition source on National Forest System lands in the state.

While Moore said that "we are bringing every resource to bear nationally and internationally to fight these fires," he warned that "existing fires are displaying extreme fire behavior, new fire starts are likely, weather conditions are worsening, and we simply do not have enough resources to fully fight and contain every fire."

In a Tuesday tweet responding to the record-breaking devastation in the state, Greenpeace U.K. pointed out that "climate change makes extreme weather events like this more likely and severe."

Defend Our Future noted that the fires aren't contained to California, but are also impacting other states in the region:

As climate journalist Emily Atkin reported in her newsletter HEATED on Tuesday:

This long weekend was literal hell for millions in the American West. California, Nevada, Arizona, Oregon, and Washington are suffering from dangerous heat, wildfire, and smoke unlike anything they've ever seen.

Scientists attribute the unprecedented intensity of these events to human-causedclimate change. Greenhouse gas emissions have made the atmosphere in these areas much hotter and drier than it used to be. "We're living in a fundamentally climate-altered world," MIT Technology Reviewnoted last month, citing a multitude of peer-reviewed research about how climate change exacerbates extreme heat and wildfire. These so-called "compound climate events" are only predicted to get worse if greenhouse gas emissions continue unabated.

Despite the dire conditions and their connection to the climate crisis, some stories from the AP, New York Times, and Washington Post "about the Labor Day weekend from Hell don't contain any climate-related information," Atkin explained, even though these three major national news outlets all have climate reporting teams.

"The repeated and prolonged failure of mainstream news outlets to include basic climate science facts in extreme weather coverage," according to Atkin, "is an abdication of their core responsibility: to give citizens the information they need to make informed decisions about how to solve society's biggest problems."