Donald Trump’s fatal flaw: Of his many defects, Bob Woodward may have identified the worst

Trump's failures come from a deep, dark well of fear and cowardice. He doesn't believe in anything, even himself 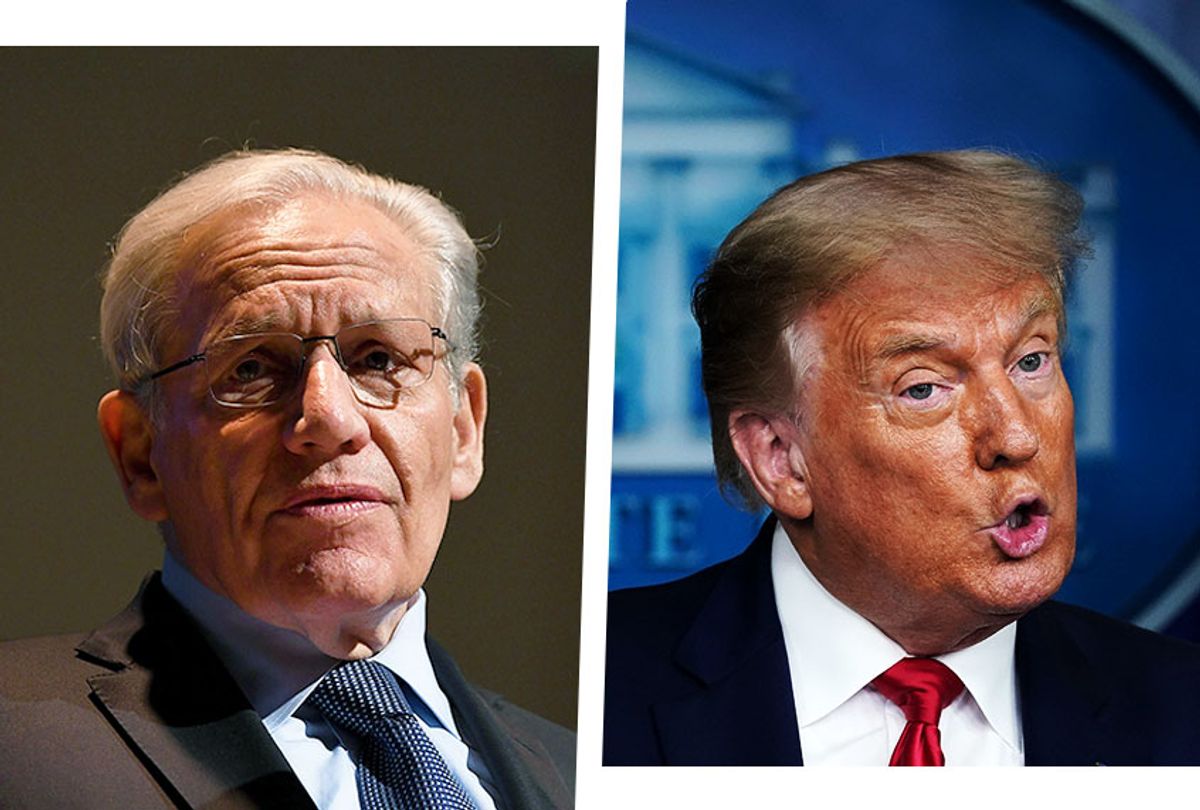 According to interviews recorded by Bob Woodward for his book, "Rage," Donald Trump was briefed by national security adviser Robert O'Brien on Jan. 28 of this year that the coronavirus "will be the biggest national security threat you face in your presidency," that the virus was five times more deadly than ordinary flu, that it was spread when "you just breathe the air," and that it would soon become a worldwide pandemic. At the moment Trump told Woodward these things, on Feb. 7, the president had one job: Persuade the American people to work together to deal effectively with this threat to their health and well-being.

That would mean, in the coming months, that Trump would have to convince people it was not just in their interest, but necessary for their very survival, to do a whole bunch of stuff they would not want to do. They would have to endure lengthy "lockdowns," when they would essentially be confined to their homes. They would have to take their kids out of school and learn to cope with "remote learning" from home. Many of them would have to close down their businesses or be laid off from their jobs. Sports competitions, from junior high and high school level right on through college and professional sports like baseball and basketball, would be canceled. Concerts would be canceled. Museums and zoos and national parks and public attractions like Disneyland and other amusement parks would close. Restaurants and bars would close. People wouldn't be able to gather in large groups to attend conventions or watch movies or plays or attend their children's graduations, or even in smaller groups for birthdays and dinner parties and weddings. People would be forbidden to visit their elderly relatives in nursing homes. If their family members got sick, they would not be able to visit them in hospitals. If loved ones died, it would not be possible to celebrate their lives in person at funerals. It would become necessary for people to learn how to "socially distance" themselves and even to wear protective masks when they were around others.

But Donald Trump didn't know how to convince others to do things they didn't want to do. All he understood was fear and money. Trump had spent his entire life dealing with people in two ways: He would try to intimidate and frighten them, and if that didn't work, he would buy them off. Two things which you and I probably look at as to be avoided, yes, like a plague — meeting with lawyers and accountants — Donald Trump did on practically a daily basis. This was the way Trump moved through the world. When he encountered a problem, he would get one of his lawyers to threaten lawsuits or file them, and when the lawsuits failed, he'd ask his accountants to figure out a way to move money that wasn't his — for example, money from his supposed charitable foundation — so he could buy his way out of trouble with a settlement.

The revelations from Woodward's interviews with Trump don't tell us much that we didn't already know. Trump knew all about the dangers of the virus. Of course he did. Trump lied about what he knew. Ditto. Trump is contemptuous of "his" generals, calling them "a bunch of pussies." We learned only days before he had called those who gave their lives in battle "losers" and "suckers," so we knew that, too.

What we haven't learned yet is why. If Trump knew way back in February that the coronavirus was as dangerous as the 1918 flu pandemic and was likely to cause severe damage to the economy, why didn't he do what he'd always done and buy his way out of it? Why didn't he propose a package of about $8 trillion to $10 trillion that would attack the virus with health care spending and protect the economy with a massive stimulus? It was a perfect setup: He could have convinced the supine Republicans to go along, the Democrats would have been all for it, he would be spending someone else's money, and he might well be coasting his way to re-election by now. But once he had made his case that the virus was just a "hoax," that it was "like a flu," and that the U.S. had "pretty much shut it down," he forfeited his chance to spend his way through the crisis.

Instead, what we got was more than 6.6 million cases of coronavirus, nearly 200,000 dead, and another Trumpian tsunami of lies and cheerleading. Open up! Send the kids back to school! Play ball! It's going to just disappear! Look at the stock market! Unemployment is down!

The words "magical thinking" come up all the time to describe Trump's approach to the biggest national disaster faced by this country in a hundred years. But it's worse than that. It's not just the lies and dissembling and projection onto others — Look at Biden in that silly mask! Trump's failures come from a deep, dark well of fear and cowardice and inadequacy. He doesn't believe in himself, so he has never believed in his ability to influence others.

You can't threaten soldiers with court martial to get them to charge an enemy that is shooting at them. You can't offer a doctor or a nurse a raise, or threaten to cut their pay, to get them to put on a gown and a mask and gloves and treat patients sick with diseases that could kill them as well as the patients. This is what Donald Trump has never understood: You can't force someone to do things they don't want to do. You have to get them to want it.

You do that by leading from the front, as they used to say in the Army. Leading by example. If it's necessary to convince people to wear masks in order to save lives, then you do something you don't want to do and wear one yourself. If people are losing their jobs, and you're asking them to live with less, then you get off the golf course and stop unnecessary crap like redesigning the Rose Garden. If hundreds of thousands of your fellow Americans are dying from a virus that's not their fault, you write letters of condolence and figure out a way to attend some virtual funerals. You share their sacrifice. You show some respect.

But that's not Donald Trump. He has no respect. He doesn't care about anyone but himself, and from his contempt for veterans and what he has told Bob Woodward about his haphazard handling of the pandemic, he isn't very good at that either. Even as a narcissist, he's a failure.