In Afghanistan, a drug sparks hope — and charges of quackery

After a popular clinic closed, public health efforts are being viewed by many as an affront to Afghan culture 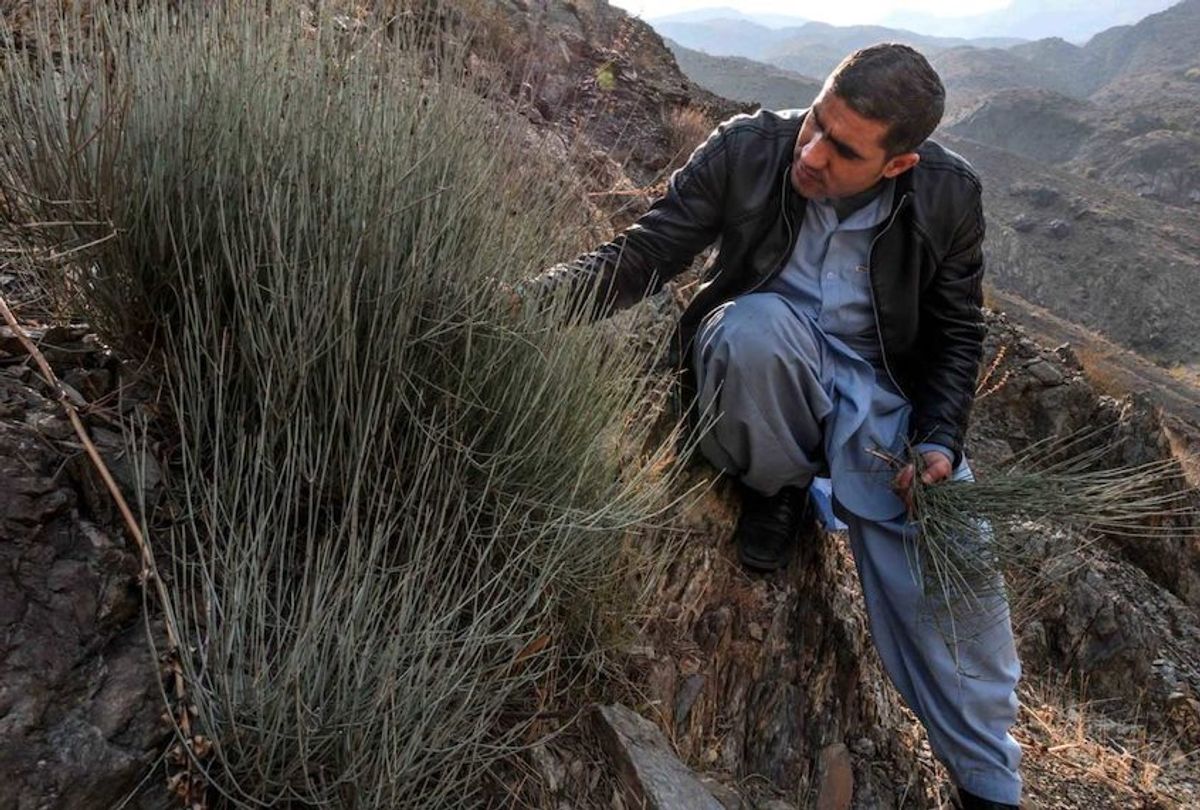 Alam Gul Alam's symptoms had been steadily worsening for weeks when he decided to visit an herbalist named Haji Mohammad Alkozai. The 30-year-old civil servant from Kabul had intently watched a video clip making the rounds on Afghan social media, in which Alkozai claims to have discovered a cure for Covid-19 and describes dramatic recoveries of previously ill patients. Whatever this man was offering, Alam knew he wanted to try it.

"I feared for my life," said Alam, who was diagnosed with Covid-19 in May. For weeks, he had struggled with severe chest and throat pain, along with shortness of breath. Doctors had prescribed medications, but nothing seemed to work. Alam was desperate.

On the evening of May 29, he traveled by car to Alkozai's clinic in the northern part of the Afghan capital. Upon arrival, Alam joined a line of hundreds of patients that stretched down the road. Once inside, he had an additional wait in an overcrowded basement. After nearly four hours, he finally received three drops of the herbalist's purported miracle concoction.

By the time of Alam's visit, hundreds of Afghans were praising the wonders of Alkozai's treatment, though the herbalist steadfastly refused to disclose the active ingredients. The clamor caught the attention of the Afghan Ministry of Public Health, which tested the compound and found that it contained several highly addictive ingredients, including opioids such as morphine and codeine. Afghanistan is the world's leading grower of opium, used to produce heroin and other illegal drugs, much of which is traded globally. An estimated 2 million Afghans use opiates according to a 2015 survey.

During a press conference on June 9, Wahid Majrooh, deputy minister of public health, released the findings. He explained the substance's addictive potential — and its lack of effectiveness as a remedy for Covid-19. Because narcotics are regulated under Afghan law, their distribution as an herbal remedy is considered criminal. The Ministry issued an order to shut down the Kabul clinic and then forwarded the findings to security agencies to take action.

In Afghanistan's deeply conservative society, many viewed these moves to protect public health as an affront to Afghan culture and religious values. When government forces tried to shut down the clinic, some Afghans took to the streets. "Afghanistan is a very religious and cultural country and it is not uncommon here for traditional doctors to prescribe herbal medicines," said Maryam Shamal Ghalib, a general surgeon at Wazir Akbar Khan Hospital in Kabul. Local medicine men like Alkozai, she explained, are seen as doing holy work.

On the frontlines of the pandemic in a country riven by decades of war, Ghalib wishes the government had taken a different tack. "Instead of confrontation, they should have created more awareness among the people," she suggested. Government officials are now working to do just that, implementing a campaign to educate the public about the drawbacks of untested herbal treatments. But they also acknowledge that some of their early messaging may have stoked fear, inadvertently creating a desire for unproven treatments.

Herbalists are not regulated in Afghanistan, and there is no official tally of their numbers. They are, however, quite common, particularly in rural areas that lack medical infrastructure. Many clinics are family-owned and operated, with recipes handed down from father to son. Historically, during times of war, herbalists have cared for their local communities in the absence of medical doctors. This history — along with corruption in the Afghan medical system — means that herbalists are widely popular, said Ghalib.

Alkozai, who has received international media coverage over the past months, has been mixing herbs in the southern province of Kandahar for over 25 years, said his assistant, Sadar Mohammad Hamdard, in an interview with Undark. Alkozai, who declined to be interviewed directly, specializes in Unani medicine, a traditional medical system that originated in ancient Greece and is now primarily practiced in and around India.

According to Hamdard, when SARS-CoV-2, the virus that causes Covid-19, hit Afghanistan, Alkozai got to work. The result: a compound with 11 organic ingredients. Without sharing those closely guarded elements, Hamdard claimed that one component boosts the immune system, while another helps with symptoms such as fever, cough, and shortness of breath. "This medicine can overcome coronavirus in one to two hours," he claimed.

Alkozai tested the treatment on his family first, said Hamdard, and then started to distribute it free of cost to the people in his province. "I work with him in the clinic without any masks and deal with hundreds of patients daily," Hamdard said. To date, Hamdard says he has not shown symptoms of Covid-19, an achievement he attributes to having taken Alkozai's medication preventively.

Of course, many people who carry the virus will not show symptoms, and officials like Akmal Samsor, an adviser and spokesperson for the Afghan Ministry of Public Health, say Alkozai's treatment is sheer quackery, offered up by an individual seeking to profit from the crisis.

But as Covid-19 spread across Afghanistan, Alkozai's popularity grew. And those like Alam risked spending hours in crowded rooms for the hope of a cure. As of August 7, more than 37,000 people have been diagnosed with Covid-19, in a country of 37 million, according to figures provided by the Ministry of Public Health.

In a short video posted online, Alkozai can be seen invoking God as the source of Covid-19 and as the inspiration for the herbalist's newfound cure. "All past diseases," he proclaimed, have appeared "by the order of Allah to torment people." Alkozai claims that God revealed the special cure to him and a handful of others.

The religious allusions resonated with many Afghans. Alam said that seeking the herbalist's help was a deeply spiritual pursuit, one that revived his faith in religion. The whole world is struggling with Covid-19, he explained, so when Alkozai said, "'With the grace of God, I have a cure for this,'" that gave people hope.

Samsor agreed that Alkozai's words carry an emotional appeal. And he pointed out that many who sought treatment were motivated by a sense of pride in thinking that a person from their homeland could develop a cure for a disease that has overwhelmed communities across the globe.

Within a few hours of taking the herbalist's drug, Alam says his health began to improve. He says he coughed less, the irritation in his throat subsided, and his pain vanished. The apparently quick recovery made him a devoted fan of Alkozai. Alam is now considering leaving his government job.

"I have become more spiritual since my recovery. I read the Quran every day, and the translations and meanings of those verses just come to my heart. My aim is to now spend my life serving the religion," he said.

Afghan medical authorities and experts are not convinced by such stories, and they're quick to point out that even small amounts of the substance can cause harm. Ghalib says that some Afghans are under the impression that because the dose is only three drops, it must be safe even if it does contain narcotics.

"Those three drops can only provide relief for a few hours, at the most 24 hours," she says. "But the effect won't stay for long." Some patients take additional doses, which can be addictive, she warned.

Patients can also develop a tolerance. "If you give someone three drops once, the next time they will need more" to achieve the same effect, Ghalib said.

Ghalib believes that Afghan public health officials should have made a more robust effort to educate the public about these risks and to interview people who did not improve with treatment. ("There were many of them," she noted.) Instead, the government swiftly shut down the herbalist's clinic.

Samsor acknowledged that the government's initial communication strategy may have missed its mark. "There was a lot of fear," he said. This may have inadvertently helped people like Alkozai. Even apparently healthy people waited in long lines so they'd have a treatment on hand in the event they became ill, Samsor recalled. But the government has since changed course, he said, targeting misinformation and urging Afghans to see a medical doctor if they need help with symptoms of Covid-19.

"In our country everyone can be convinced that herbal medicines and [herbalists] work miracles," Ghalib explained. In her mind, the backlash was inevitable and worrisome from a public health perspective. "Those crowds [of protesters] could have caused the virus to spread further."

Meanwhile, Alkozai continues to distribute his concoction through underground networks in Kabul. And despite government orders for closure, he still runs clinics in Kandahar and in Herat Province, the epicenter of the nation's outbreak.

For Afghans, the burden of a pandemic is more than many can tolerate in a country already inundated with violence and poverty. And without access to a vaccine or widely effective treatment for Covid-19, any hope — however obscure — might seem worth fighting for, particularly when it resonates with one's spiritual beliefs.

"There is no cure and our hospitals are not equipped to handle this crisis," Alam explained. "If in such a life and death situation, someone can offer you hope, of course you will take it."