As wildfire smoke chokes the West Coast, people are making DIY air purifiers. But do they work?

A pandemic-related shortage has intensified the demand for air purifiers. But do these DIY projects actually work? 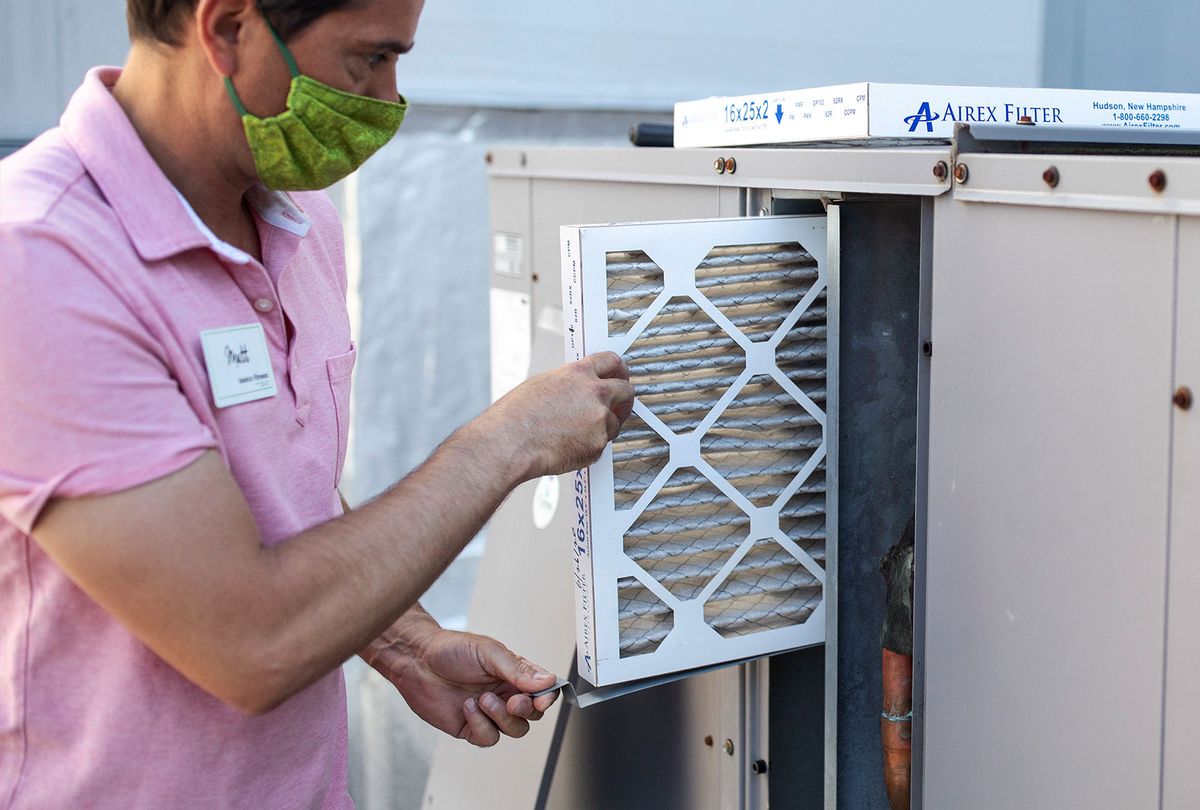 Mark Marston slides a MERV 13 air filtration filter back into the HVAC system outside of this gym Basics Fitness Center on Tuesday, July 21, 2020. (Brianna Soukup/Portland Press Herald via Getty Images)
--

Do-it-yourself culture usually involves hobbyists tinkering around as a means of creating a fun diversion: Making jam, knitting, or building furniture, perhaps. But as the West Coast chokes in apocalyptic wildfire smoke, a more dystopian hobbyist project has been gaining traction.

Google searches for "DIY air purifier" skyrocketed in the last month, a majority of them from California, Oregon and Washington. Search the hashtag #diyairpurifier on Instagram and Twitter, and you'll find photos of hacked-together box fans and filtration tools. Unlike baking your own bread, building your own air purifier is a project many are turning to as a means of survival, as the air quality index (AQI) has lingered in the "hazardous" range for days or even weeks for many West Coast citizens. And in cities like Portland, the descent of the wildfire smoke made industrial air filtration appliances hard to find, as residents bought out local supplies.

Roxy Rosen, who lives in Pacifica, California, built her own air purifier and posted about it on Instagram. In an interview with Salon, she said she turned to the project because she found that commercial air purifiers didn't work as well. After Rosen bought an air sensor to see herself what the air quality in her neighborhood and house was like, she found that commercial ones weren't working.

"I tried a Honeywell, a Molekule, a little tiny mini air purifier and they couldn't really do a good job, and then I did more research," Rosen told Salon. "I ended up getting the Blue Air air filter which does a pretty good job up to about 300 or 400 square feet, but a lot of these models can do a room — they can't do a whole house."

Rosen said she'd still walk through the house with her air quality sensor and find bad air in the house, which is when she got the idea to build her own by taping a Filtrete 25x20x1 HEPA filter to a fan.

"It cleaned the air so fast,"Rosen said. "It was more powerful than these commercial ones."

Rosen now has a few of them in her house.

"One of my friends in LA was suffering really badly, they've got it really bad right now, so yesterday I coached her on how to do this at her house with her old box fan, and she put it together and got it going," Rosen said. "I got a text from her then around 10 o'clock at night. She was like, 'It's great, it's helped so much.'"

Experts in the air quality world agree with what Rosen found to be true — specifically, that the DIY purifiers can work just as well as industrial ones, if not better.

"The data on DIY purifiers is very clear: they work," Thomas Talhelm, Associate Professor of Behavioral Science at University of Chicago Booth School of Business told Vice. "They can even rival the $1,000 purifiers."

Another reason behind the trend is that popular and affordable air purifiers made by companies like Honeywell, Vornado and Holmes are sold out at many hardware stores like True Value and Home Depot. The shortage isn't because of the wildfires, but because of COVID-19. As reported by Fortune magazine, in July, leaders in the air filter industry warned about an air filter shortage. They noted that if the Centers for Disease and Control made it a regulatory requirement for large indoor spaces to use MERV-13 rated air filters — a filter rating that is the best for reducing contaminants — the industry would not be able to meet the demand.

As reported by Air Conditioning, Heating & Refrigeration News, there is a bit of a debate as to whether the so-called shortage is actually a shortage or just a production delay. "Most higher-MERV filters use electrostatically charged meltblown synthetics, the same as N-95 masks," editor Ted Craig writes. "This means the filters being prescribed for buildings and the masks required for hospitals are competing with each other."

The shortage of air purifiers and filters extends beyond the West Coast. In Massachusetts, NBC Boston reported that a school has delayed in-person learning because of an air purifier shortage.

Cost is another reason many have turned to DIY air purifiers. In Oakland, California, organizers like Tracey Corder have been crowd-funding for the cost of air purifiers to give them to people who cannot afford them.

"We're still in a pandemic. People have lost their jobs. There's a loss of wages," Corder told Marketplace. "And it's a pandemic that targets our respiratory system, so this only makes it worse."

In the future, the market for air purifiers is only expected to grow. According to a market report, the space is "anticipated to be driven by the rising prevalence of airborne diseases along with rising pollution levels in urban areas."

That means that even for those who don't live on the West Coast, purchasing an air purifier or making your own may be a good idea.