With no end in sight, Trump's lies just keep making the pandemic worse

Trump has risked his followers' lives and damaged the credibility of science — and for what? It's not nearly over 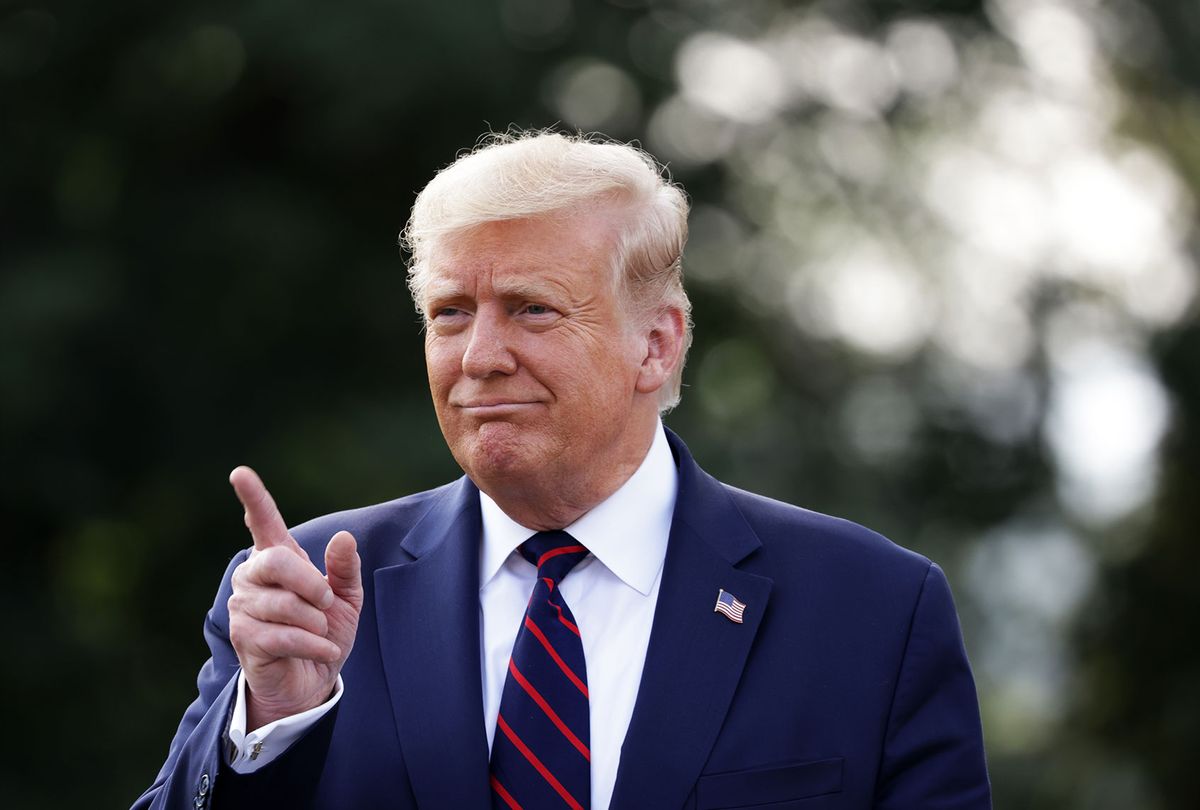 With the release of Bob Woodward's book "Rage," we've been given the opportunity to revisit the Trump administration's response to the pandemic with the added insights of comments the president made in private at the time. Unsurprisingly, we have learned that Donald Trump was lying to the public every step of the way. Day after day, we hear more of the Woodward tapes, and each one reveals Trump to have been even more reckless and self-centered than we knew, leaving Woodward and millions of others unable to tell "whether he's got it straight in his head what is real and what is unreal."

The president had the presence of mind to tell Woodward in April that the virus is "a killer if it gets you," but shortly after that told the public, "The Invisible Enemy will soon be in full retreat!" By July, he had stopped even trying to explain away his failure. He grew very petulant and upset with Woodward for questioning him on this:

On Tuesday night ,Trump attended a town hall sponsored by ABC News. He had to talk to regular voters in Pennsylvania rather than reporters, and it was a train wreck. He lied so often that the Washington Post fact check was headlined, "Trump's ABC News town hall: Four Pinocchios, over and over again."

His comments about the pandemic were especially egregious. Here's just one example:

Lately Trump has taken to ridiculing Joe Biden's mask-wearing, suggesting that the former vice president has a psychiatric problem. He sets an example for his tens of millions of supporters and they follow it, unfortunately for them and everyone with whom they come in contact.

We probably won't know the full extent of the damage done by his mask-free super-spreader rallies until after the election, which is one reason why Trump — who clearly has little regard for his most ardent fans — now feels free to hold them. But it is certain that there will be fallout. People who attended a Trump rally this fall will die, and some will almost certainly spread it to others some who will die.

A recent study using some new and controversial techniques tracked the spread of the virus from the big motorcycle rally in Sturgis, South Dakota, last month, which seemed to show a massive increase in cases around the country stemming from the 500,000-person gathering. While the overall numbers have been disputed by scientists at Johns Hopkins, there is no doubt about an increase in cases in the surrounding Sturgis area. USA Today reported this week that "a month after the controversial Sturgis Motorcycle Rally drew hundreds of thousands of bikers to South Dakota, COVID-19 infections are growing faster in North Dakota and South Dakota than anywhere in the nation."

Contract tracing is tough in this country. We don't have a good system to begin with, and many people refuse to cooperate. It's fair to guess that Trump rally-goers are among the least likely to agree to it. So we may never know how many of the thousands of people who will have attended Trump rallies by Nov. 3 will be sacrificed to give the president the ego boost he craves.

But one has to look no further than the famous Maine wedding last month to know just how lethal these events can be:

At least seven people have died in connection to a coronavirus outbreak that continues to sicken people in Maine following a wedding reception held over the summer that violated state virus guidelines, public health authorities said. The August wedding reception at the Big Moose Inn in Millinocket is linked to more than 175 confirmed cases of the virus, the Maine Center for Disease Control and Prevention said Tuesday ....

The virus cases stemming from the wedding have spanned hundreds of miles in a state that had largely controlled the spread of the coronavirus through the summer. Maine has reported less than 5,000 cases of the virus in total since March.But the growing number of cases related to the wedding, which exceeded the state's guidelines of 50 people or less at indoor gatherings, could undo some of that progress if it continues to swell. Authorities have said more than 65 people attended the wedding.

Trump's rallies feature thousands of people, many of them older and the vast majority without masks, standing close together for long periods of time, cheering and shouting. They aren't worried, because their beloved leader is telling them they don't need to be:

While Trump's followers believe everything he says, the damage is much broader than that. His lies and manipulation of the facts during this crisis have eroded the rest of America's trust in the government to such an extent that, according to a new NBC News/Survey Monkey poll, "Fifty-two percent of adults say they don't trust the president's vaccine comments, while just 26 percent say they do." Only 20% say they're unaware of what the president has said. Here's what has people nervous:

If you want to know the truth, the previous administration would have taken perhaps years to have a vaccine because of the FDA and all the approvals, and we're within weeks of getting it.

Trump's manipulation of federal agencies to allow unproven therapies, which in at least one case had to be withdrawn when it proved dangerous, doesn't inspire faith in the process. How can people be expected to trust his administration to deliver a safe and effective vaccine under these circumstances?

America was once seen as the global leader in science and technology, but the nation's reputation has plummeted around the world in the wake of Trump's mishandling of this crisis. According to Pew Research, U.S. allies are appalled by Trump's handling of the pandemic and find him less trustworthy than the presidents of Russia and China. People in all countries surveyed view the U.S. response as worse than that of their own country's, the World Health Organization, the EU or China. (One of the great ironies of this whole disaster is that Trump pulled the U.S. out of the WHO ostensibly for lying about the lethality and spread of the virus — when that was exactly what he was doing every single day. )

Trump likes to say that "nobody's ever seen anything like this," and in this case, at least, he's right. The consequences of the president's psychological and intellectual shortcomings, which led him to downplay the pandemic, are so devastating that it led Scientific American to endorse a candidate for president for the first time in the magazine's 175-year history:

The evidence and the science show that Donald Trump has badly damaged the U.S. and its people — because he rejects evidence and science. The most devastating example is his dishonest and inept response to the COVID-19 pandemic, which cost more than 190,000 Americans their lives by the middle of September. He has also attacked environmental protections, medical care, and the researchers and public science agencies that help this country prepare for its greatest challenges. That is why we urge you to vote for Joe Biden, who is offering fact-based plans to protect our health, our economy and the environment.

It is hard to see how any rational person could come to any other conclusion.