Ex-model Amy Dorris accuses Trump of 1997 sexual assault: "He just shoved his tongue down my throat"

"This is our president," Dorris says in a new interview. "This is the kind of thing he does" 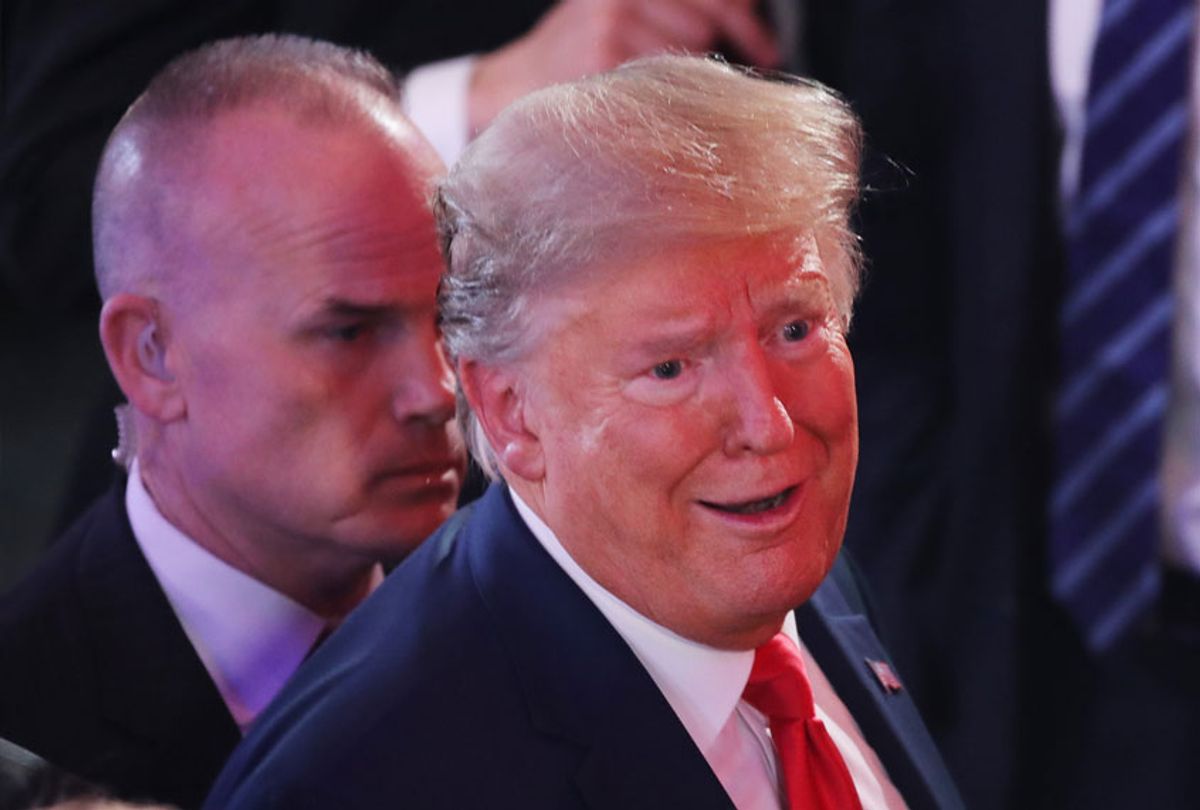 Former model Amy Dorris revealed in a new interview that she felt "sick" after President Donald Trump allegedly sexually assaulted her outside of the bathroom in his VIP box at the 1997 U.S. Open tennis tournament.

"He just shoved his tongue down my throat, and I was pushing him off. And then that's when his grip became tighter, and his hands were very gropey and all over my butt, my breasts, my back, everything," Dorris told The Guardian in an exclusive interview.

"I was in his grip, and I couldn't get out of it," she said. "I don't know what you call that when you're sticking your tongue just down someone's throat, but I pushed it out with my teeth. I was pushing it, and I think I might have hurt his tongue."

Dorris, who was 24 years old at the time of the alleged incident, said it made her feel "violated."

Speaking through his lawyers, Trump "denied in the strongest possible terms having ever harassed, abused or behaved improperly toward Dorris," The Guardian reported.

Dorris, now a 48-year-old mother to twin daughters, gave The Guardian evidence to support her allegations: her ticket to the U.S. Open that year, as well as six pictures of her spending several days with Trump in New York. Among them was a photo of Trump wrapping his arm around her in the VIP suite, with the location of the alleged assault in the background.

Trump had at the time been married for four years to Marla Maples, his second wife, whom he would go on to divorce two years later.

Several individuals corroborated Dorris' account, including her mother and a friend, according to The Guardian. They said the former model called them immediately following the alleged assault.

Dorris said she did not go public during the 2016 campaign, at which time several women leveled similar accusations against Trump, out of fears for her family's safety. She recently changed her mind in order to set an example for her daughters.

"Now, I feel like my girls are about to turn 13 years old, and I want them to know that you don't let anybody do anything to you that you don't want," she said. "And I'd rather be a role model. I want them to see that I didn't stay quiet — that I stood up to somebody who did something that was unacceptable."

Dorris claimed that the assault occurred in the middle of a weekend trip to the city with Jason Binn, her boyfriend at the time. He was a fashion and lifestyle magazine publisher, as well as a friend of Trump.

"He came on very strong right away," Dorris recalled of Trump. "It seemed typical of a certain guy, people who just feel like they're entitled to do what they want . . . even though I was there with my boyfriend."

The details recall descriptions of similar behavior documented by a number of Trump accusers. Natasha Stoynoff, a writer for People magazine, published a personal essay in October 2016 recalling Trump allegedly "pushing me against the wall and forcing his tongue down my throat" during a 2005 interview at his Mar-a-Lago club.

In off-camera audio from a 2005 Access Hollywood tape, released weeks before the 2016 election, Trump told host Billy Bush about an attempt to seduce his co-host Nancy O'Dell, who was married at the time.

I moved on her, and I failed. I'll admit it.

I did try and fuck her. She was married.

And I moved on her very heavily. In fact, I took her out furniture shopping. She wanted to get some furniture. I said, "I'll show you where they have some nice furniture." I took her out furniture — I moved on her like a bitch. But I couldn't get there. And she was married. Then all of a sudden I see her, she's now got the big phony tits and everything. She's totally changed her look . . .

Dorris said the alleged assault occurred behind a partition wall outside of the VIP suite's bathroom as other Trump guests mingled in the next room.

"I was having some issues with my contact lenses," she said. "I remember going in there to moisten my lens."

Allegedly waiting outside was Trump.

"Initially, I thought that he was waiting to go to the bathroom, but that wasn't the case, unfortunately," Dorris said.

Dorris then claimed that the future president forced himself on her, even though she told him to "get away" and to "please stop."

"It doesn't matter who you are," she said. "Any time anyone says no, no means no. And that just didn't work out for me. It wasn't enough."

"I just kind of was in shock," she added. "I felt violated, obviously. But I still wasn't processing it and just was trying to go back to talking to everyone and having a good time because, I don't know, I felt pressured to be that way."

Though Dorris said Trump did not attempt to allegedly assault her again, she claimed that he continued to make advances at her throughout the weekend.

Dorris told The Guardian that she continued to spend time with Trump, in part because the weekend in the city was "overwhelming."

"I was there from Florida, and I was with Jason. I had no money — nowhere to go," she said. "We were going from event to event, and it was overwhelming."

"People spend years around people who have abused them," she added. "That's what happens when something traumatic happens — you freeze."

Over the last four years, Dorris said that she had grown increasingly frustrated watching the president dismiss his other accusers as liars.

"I'm sick of him getting away with this," she said. "I'm tired of being quiet. It's kind of cathartic. I just want to get this out. And I want people to know that this is the man — this is our president. This is the kind of thing he does, and it's unacceptable."