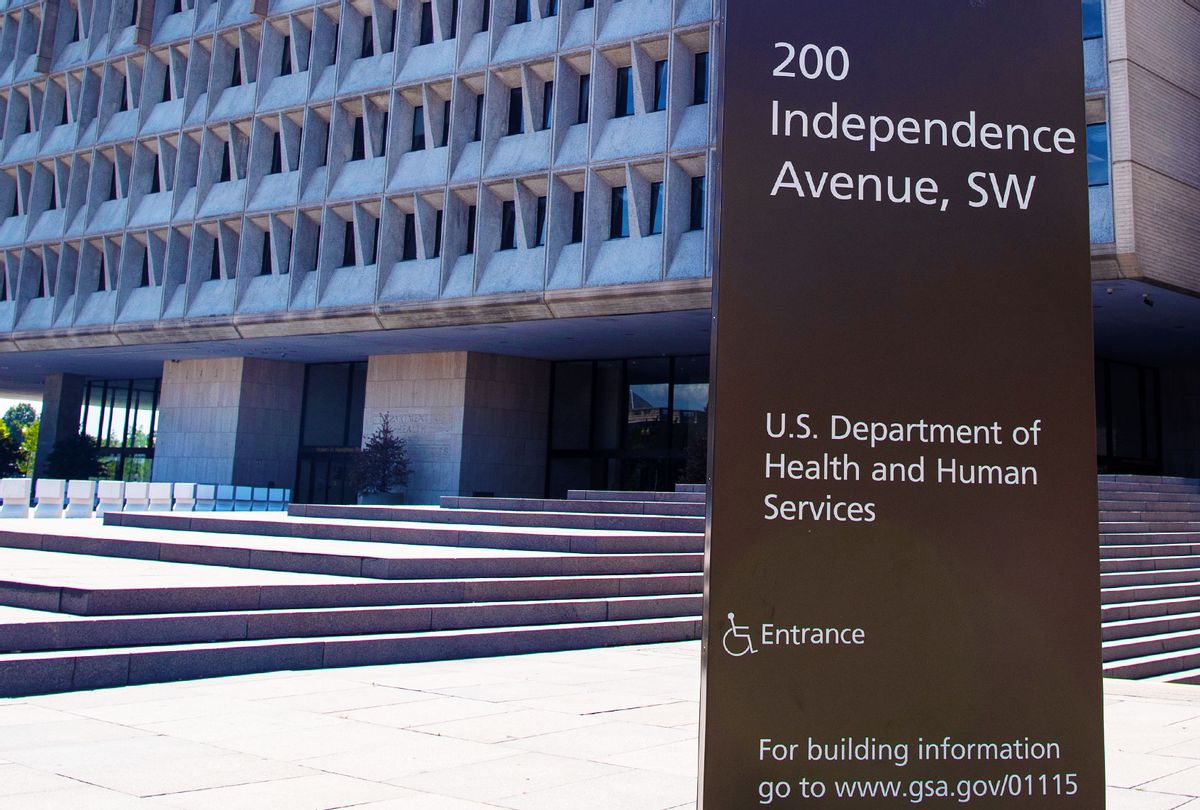 The U.S. Department of Health and Human Services building is pictured in Washington on Monday, July 13, 2020 (Caroline Brehman/CQ-Roll Call, Inc via Getty Images)
--

A watchdog group has accused Robert Charrow, the general counsel at the Department of Health and Human Services, of pushing to ease testing rules to help his former clients in the medical device and diagnostic industry.

Charrow, who was appointed by President Trump in 2017, led the administration's push to ease rules ensuring the safety of coronavirus diagnostic tests developed by individual labs before HHS Secretary Alex Azar "overruled" Food and Drug Administration (FDA) officials to revoke their ability to regulate the tests, according to Politico.

"Top HHS officials led by General Counsel Bob Charrow argued for months that the FDA lacked the legal authority required to regulate this particular slice of the testing market, which includes labs located in larger academic medical centers and smaller commercial laboratories, as well as a handful of large corporations," the outlet reported earlier this week.

Charrow, a veteran attorney who has specialized in cases surrounding federal regulation of health care, previously represented more than a dozen clients in the medical device and diagnostic space, according to his financial disclosure.

Charrow's former clients included Hologic, which was the first diagnostic firm to receive support from the HHS' Biomedical Advanced Research and Development Authority (BARDA) and later received an Emergency Use Authorization from the FDA for its coronavirus test. In July, the company received $7.6 million from HHS and the Department of Defense to expand its diagnostics.

Charrow's other former clients in the industry include CVS, which is selling coronavirus tests to employers, and OPKO Health, which announced Phase 2 trials of a coronavirus treatment this week, along with Bracco Diagnostics, Cure Medical, CRH Medical, Genetic Technologies Ltd., Itamar Medical, LGC Limited, LifeBond Inc., MedBridge Healthcare, Medtronic and OrSense Ltd. He has also represented pharmaceutical companies like Teva and Sanofi, which have both received funding from HHS.

"This is the definition of the swamp that President Trump had promised to drain," said Eli Zupnick, a spokesman for the progressive watchdog group Accountable Pharma, in a statement to Salon. Americans are losing trust in the administration, he continued, especially in the face of evidence that "far too many political appointees at Azar's Department of Health and Human Services care more about helping their special interest friends and allies than protecting patients and families,"

HHS did not respond to questions from Salon.

The department led a months-long pressure campaign against the FDA "urging the agency to abandon its responsibility for ensuring the safety and accuracy of a range of coronavirus tests," according to the Politico report. The effort alarmed FDA officials who worried that such a move would result in "inaccurate tests … flooding the market" and might undermine efforts to combat the pandemic.

The FDA's device chief, Jeff Shuren, was excluded from key meetings on the issue while HHS lawyers like Charrow led the push, according to the report.

"Primarily, it was our lawyers advising us that this [review] requirement was illegal," HHS chief of staff Brian Harrison told the outlet.

But the push alarmed many career officials who expressed concerns about the politicization of public health policy. "I've never seen such a complete political overruling of the agency,"a former HHS official told Politico. "It makes me worried about what's to come."

Azar ultimately revoked the FDA's ability to regulate tests developed by individual labs for their own use, despite opposition from FDA head Dr. Stephen Hahn. That decision led to pushback inside the FDA, which has not announced any changes to policy even though HHS published an announcement on its own website.

Earlier in the pandemic, the FDA's decision to ease testing rules led the agency to grant Emergency Use Authorization for dozens of tests. More than 80 of the 125 tests submitted to the FDA for authorization had "design or validation problems," according to an article by Shuren and Tim Stenzel, the FDA's diagnostics chief, published in The New England Journal of Medicine.

Politico reported that the push by Charrow echoed a position "long held" by some diagnostic companies despite "fierce resistance" from FDA lawyers and "skepticism" from White House attorneys.

Former Trump FDA chief Scott Gottlieb warned that as a result of the move the "FDA might not be able to provide critical advice to test developers or take needed enforcement actions against bad tests."

Charrow pushed back on the concerns from medical experts.

"It is false to say that this will lead to unregulated, low quality COVID-19 tests," he told Politico last month. "Every single COVID-19 test in the United States will still be regulated at the federal level. This simply removes an additional regulatory barrier that was erected in January that at most other times is not required."

Bloomberg Law previously described Charrow as head of a controversial "dream team" of attorneys at HHS that has taken an "aggressive" approach in pushing political priorities. The team at the department's Office of General Counsel has been intimately involved in crafting policies that stand to benefit the industry that Charrow previously represented. Charrow has expanded the size of the office by about 100 attorneys since taking over.

Charrow was also involved in pushing for an FDA authorization for chloroquine, a drug hyped by Trump before he switched to its less toxic cousin hydroxycholoroquine, which has since been shown to be ineffective in treating or preventing coronavirus infection.

Charrow sent former BARDA chief Rick Bright an "urgent directive" to make the drug widely available outside of medical settings and without close supervision from doctors, according to a whistleblower complaint filed by Bright after clashing with officials.

The push "raised alarms" inside the FDA, according to the Washington Post, where officials pushed to limit the authorization.

Two current officials confirmed Bright's claim that Charrow "directly drove the project after Trump spent days in March publicly stumping for his health officials to expand access to the drug," Politico reported in May.

One former administration official told Bloomberg Law that Charrow feels that he has nothing to lose by taking a more aggressive approach than previous office-holders.

Charrow "plans to make this job the last of his career," the official said, "so he doesn't feel the need to make nice with everyone."