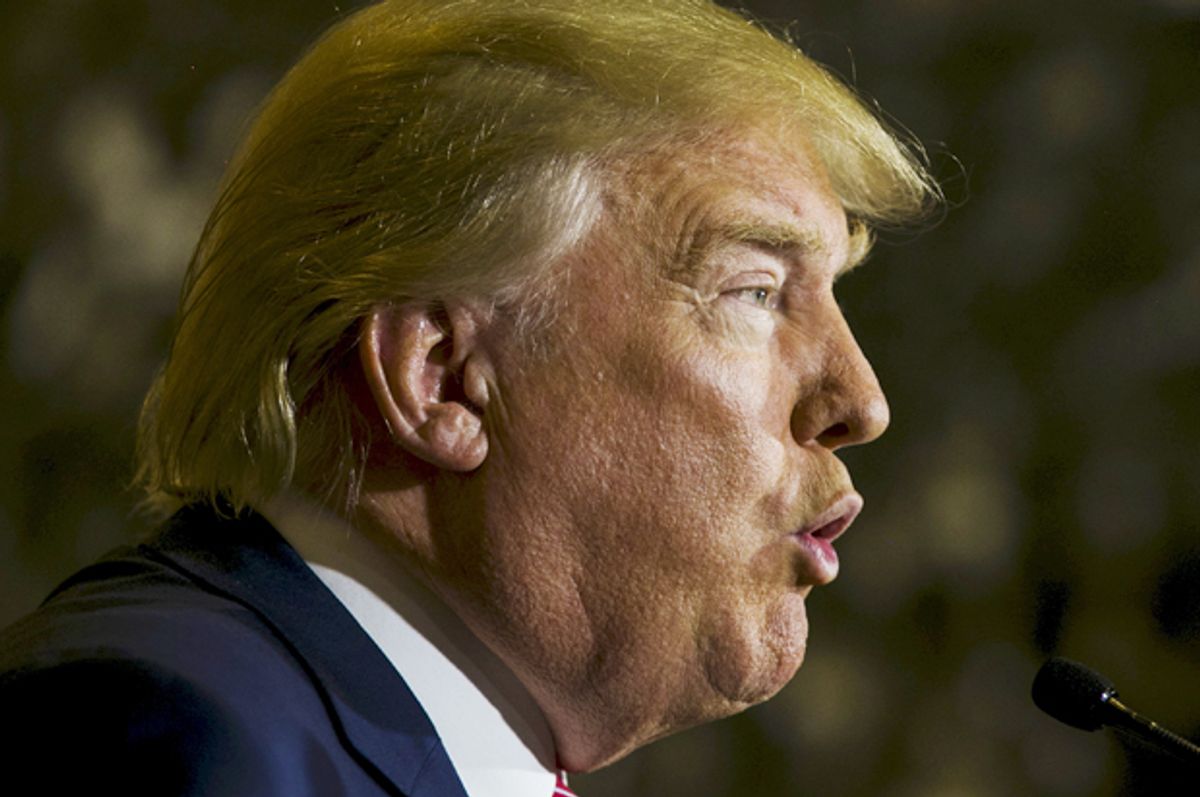 Progressive educators and historians fired back on Friday a day after President Donald Trump took aim at the late historian Howard Zinn and the 1619 Project, and vowed to "restore patriotic education" in American schools he accused of teaching "hateful lies about this country."

Speaking on stolen Nacotchtank land just steps away from where Black slaves were bought and sold on the National Mall, Trump delivered an extraordinary Constitution Day address at the National Archives Museum full of patriotic platitudes and praise for the nation's "glorious" history.

The president—who lives in an executive mansion built by slaves—attacked U.S. education, claiming that teaching the "toxic" and "horrible doctrine" of critical race theory is "a form of child abuse in the truest sense of the word."

"Our mission is to defend the legacy of America's founding, the virtue of America's heroes, and the nobility of the American character," the president said. "We must clear away the twisted web of lies in our schools and classrooms, and teach our children the magnificent truth about our country. We want our sons and daughters to know that they are the citizens of the most exceptional nation in the history of the world."

To that end, Trump said he would soon sign an executive order "establishing a national commission to promote patriotic education" and "encourage our educators to teach our children about the miracle of American history."

During his speech, Trump attacked both the 1619 Project—a New York Times Magazineinitiative created by Pulitzer Prize-winner Nikole Hannah-Jones focusing on slavery and the key role of Black people in building the country—and Howard Zinn, the iconic historian and author of the seminal best-selling 1980 book  A People's History of the United States.

Trump said the 1619 Project "rewrites American history to teach our children that we were founded on the principle of oppression, not freedom."

"The left-wing rioting and mayhem are the direct result of decades of left-wing indoctrination in our schools," Trump said of recent racial justice protests. "Our children are instructed from propaganda tracts, like those of Howard Zinn, that try to make students ashamed of their own history."

Zinn believed just the opposite—that teaching the truth about U.S. history is the best way to fight propaganda.

Critics accused the president of whitewashing history in his speech. Trump discussed the "legacy of America's founding" without mentioning the critical fact that the nation was largely established and maintained through genocidal "extermination"—Thomas Jefferson's word—of Indigenous peoples, the enslavement of Black people, and enduring white supremacy.

The president also lauded the Founding Fathers without noting that many of them owned slaves and called for—and perpetrated—genocide against Native Americans. He lionized the nation's founding documents without acknowledging the hypocrisy inherent in proclaiming that "all men are created equal" while denying equality to the majority of the nation's people. He uplifted police as "the universal symbol of the rule of law" while ignoring policing's slave-hunting roots.

Also speaking at Thursday's event was Wilfred M. McClay, whose book, Land of Hope: An Invitation to the Great American Story, will form the basis for Trump's taxpayer-funded "patriotic" curriculum. According to Georgetown University history professor Michael Kazin, the book "ignores most social movements" and gives "the silent treatment to the long struggle for Black freedom."

McClay bashed A People's History, claiming it and other material from the Zinn Education Project (ZEP)—a free resource for educators to teach history from a people's perspective—are "snuck under the door of unsuspecting teachers."

ZEP and numerous educators fired back a series of tweets defending the project and accusing the president of spreading "McCarthy-like" and "fascist" ideas.

Education historian Diane Ravitch excoriated Trump in a Friday blog post, noting his impotency to actually institute his patriotic education plan and doubting whether the president has ever even read either of the nation's founding documents.

"Remember that he repeatedly claimed that Article II of the Constitution allows the president to do whatever he wants. Clearly he has never read Article II," wrote Ravitch.

"Do you think he knows that federal law prohibits any federal official from interfering with curriculum or instruction in the schools? Obviously not, but if he knew, he wouldn't care since he is convinced that he is above the law," she added.

Kevin Kumashiro, former dean of the University of San Francisco School of Education, told Common Dreams in an email that Trump's remarks were but the latest attempt by conservatives to paint critical learning as "divisive, un-American, biased, and inflammatory."

"Not surprisingly, it is this whitewashed curriculum that often gets framed as objective and neutral, whereas efforts to raise awareness about the discomforting realities of race and racism get framed as, in Trump's words, 'toxic propaganda,'" he said, also noting the administration's recent directive banning federal funding of diversity and anti-discrimination training.

Responding to Trump's attacks, Hannah-Jones of the 1619 Project said that "the efforts by the president of the United States to use his powers to censor a work of American journalism by dictating what schools can and cannot teach and what American children should and should not learn should be deeply alarming to all Americans who value free speech."

Hannah-Jones also took to Twitter to respond to Trump's attacks, noting that there wasn't a single Black historian at his American history conference.