Should a horror anthology like "Lovecraft Country" be expected to speak to any particular moment?

Misha Green has made a horror series starring Black characters in 1950s America. And her only desire is to thrill 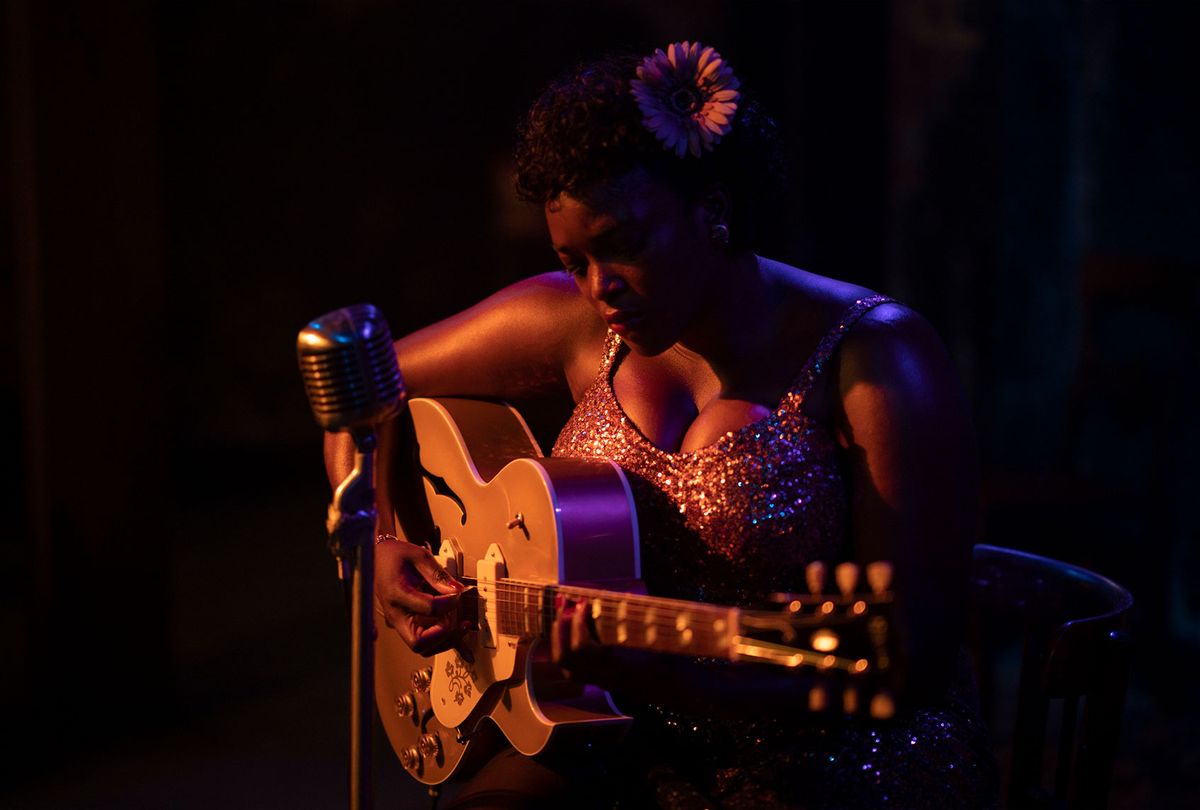 In a recent interview with "Lovecraft Country" creator Misha Green, I invoked a work that, I suspected, would evoke a specific response: "Watchmen." Our Zoom conversation came at the tail end of a press day during which I'm sure many other fellow journalists had mentioned that other HBO series, one that instigated choruses of heady debate and intricate analysis.

Junkets are like that: some questions get asked over and over again, and actors and producers do their level best to provide quotable variations on a theme as answers. It's an annoying business, but it's their job.

Still, I made a bet as to what sort of reaction that mention might elicit. Sure enough, Green's smile took on a shade of forbearance when I asked her whether she considered the cultural heat around "Watchmen" while making "Lovecraft" and if she wondered how her series might evolve the conversation.

"No," she gently and patiently responded, before observing that even in the midst of production, it was pointed out to her that both her series and "Watchmen" reference the race massacre in Tulsa. She responded to that observation with, "'Lots of ways we can look at Tulsa. It's not a monolith, guys, it's OK.' And I feel the same way about this moment. What's happening in this moment has been happening for a very long time."

But this version of the "moment" to which Green referred is a tug-of-war between discomfort and understanding — and a lot of the burden of figuring out to navigate the thorny fields of our nation's fraught history with regard to race and racism has fallen to TV series and films, fictional and nonfictional.

"It's odd," Green added. "As an artist, you want to be speaking to the times. We could argue that was happening when 'Underground' [Green's previous series] was becoming a thing. We can argue that it was happening before that moment." The question is how much of an obligation artists such as Green have to provoke conversation regarding the moment and somehow move it along, and whether the audience will simply allow her and others creators to make a series centered upon people who aren't typically the focus — a Black family in the case of "Lovecraft Country" — and see it without the weight of expectation that it must somehow make some grand, powerful statement that speaks to This Moment.

It's easy to see why "Lovecraft Country" confuses and irritates some people in a way that differs from those who simply don't like shows of its ilk. The disconnect has something to do with its structure: like the 2016 novel upon which the series is based, "Lovecraft Country" is a family drama whose episodes hang together like an anthology series.

"The X-Files" adopted this one-and-done structure to great success, although the most unshakable of its fans will admit that even that beloved classic was inconsistent. It could also be disgusting, even controversial in its storytelling, without anyone grilling Chris Carter about its overarching social message. Very little of the content of "The X-Files" aggravated the politically or socially choleric viewer, because its FBI cases were open and shut affairs — told in a time when the Bureau wasn't subject to accusations of partisanship.

Whereas "Lovecraft Country" has confrontations with racists and racism baked into its very premise by centering Black protagonists in segregated 1950s America. This gives rise to certain expectations of inserting meaning and profundity within stories about slimy monsters, warlocks and demons. The novel's author Matt Ruff purposefully pits Atticus Freeman (Jonathan Majors) and Leti Lewis (Jurnee Smollett) against a white sorcerers' cult known as the Sons of Adam; in the second episode table-setter it's revealed that Atticus shares a bloodline with a founding member whose forebear raped one of the hero's ancestors.

What's leading to no shortage of confusion among "Lovecraft" detractors is Green's choice to follow an anthology format that's fallen by the wayside. Today's definition of anthology series characterizes one-season dramas that follow a major arc with little to no deviations from the path between premiere and finale. But the "Lovecraft" narrative is more comparable to "Tales From the Crypt," with many stories fused to the spine of a season-long arc and Tic's journey.

Obviously this is not some seamless chimera. The defining characteristic of "Lovecraft Country" is its tendency to veer down backroads en route to each waystation. With the sixth episode set to air, we've already messily danced with several terror tales, some illustrative parables about aspect of the Black American experience alloyed to a larger story that is, for all intents and purposes, a typical gothic horror piece.

H.P. Lovecraft's catalogue consists of short stories held together with tentacles, goo and his penchant for bigotry. This makes the heroes' Blackness in 1950s America a clapback in itself, a state that contains many stories, mostly triumphant and much of it in confrontation with terror.

The potent and recently-aired fifth episode, "Strange Case," shows Ruby Baptiste (Wunmi Mosaku), half-sister to Leti, falling under the spell of the mysterious Braithewaite family associate William (Jordan Patrick Smith), who slips Ruby a potion that transforms her into a white woman. Initially horrified, William invites Ruby to spend the day walking through the world in white skin – and sure enough, she discovered all the ease and privilege that comes with moving through the world as a white woman. At one point, she even gets an ice cream cone for free.

Highlighting this is the ironic prominence of Janet League's recorded recitation of "Dark Phrases" from Ntozake Shange's "For Colored Girls Who Have Considered Suicide When the Rainbow Is Enuf" playing in the background as Ruby, in Hillary's skin, sits unmolested on a bench in a white neighborhood, the sun shining down on her:

Thusly won over by her magic boon, Ruby heads to a luxury department store and scores a position she's long coveted – she made an associate manager and goes by Hillary. The price of her transformation spell (besides an expiry that leads to painful, gooey skin-shedding) is that as Hillary, Ruby hears how her white colleagues talk about Black people, specifically the Black clerk the store deigned to hire. All the jokes the white salesgirls make about their Black colleague could, and do, refer to Ruby. They just don't know it because she's camouflaged.

Ruby's subterfuge ends after a night of her co-workers' racist tourism to a club to the South Side where the department's manager attempts to rape the Black sales clerk. The next day Ruby gives her notice – as Hillary, of course – and as a parting gift assaults the manager, bloodily sodomizing him with her stiletto heel as she sheds her fake whiteness. Ruby makes sure he sees that it was a Black woman that he held in such high esteem and, in the end, had screwed him for once, in a very loose matter of speaking.

This is a Lovecraftian pulp tale like all the others; it can also be interpreted as an unsubtle tale of passing. Beyond that, a scene in which Michael K. Williams' Montrose, a closeted gay man, joins his lover at a drag pageant and releases his shyness to joyfully dance as he is makes this hour a commentary about society's impositions on our identity. But that aside fits only as well as the viewer allows for it.

As the interviewing manager points out to Hillary, she has more than enough education and skills for a management position, but those are Ruby's accomplishments. Ruby's Blackness was her only barrier; in her real skin, she was barely able to submit an application. And this is a situation Mosaku has firsthand knowledge of, as a Nigerian-born actor living in Britain.

How do you tell that story in a way that hasn't been told before? With a lot of blood, guts and squishy sound editing.

The ninth-inning twist in "Strange Case" is that Ruby isn't the only one wearing another person's skin, a revelation that violates her anew. But the fallout of that will have to wait, since this week "Lovecraft" takes a step back to show us Atticus' tour in Korea, viewed through the eyes of his old lover Ji-Ah (Jamie Chung) who hints at the end of the previous episode that somehow she has seen his future.

Viewers who take issue with the means by which "Lovecraft Country" joins one story to the next have a point: characters commit shocking acts that don't immediately appear to have a purpose beyond creating additional obstacles for the characters to surmount. The connective tissue linking tale to tale, cliffhanger style, may be this season's weakest link.

But people with an affection for horror anthology shows of yesteryear learn to roll with the rubbery explanations as to how the heroes wriggle out of traps because, with a few notable exceptions, we're in it for the simple adrenalized jolts.

Non-white creators telling their stories in this space are still a rare sight, for that matter. Green is one of the few Black genre creators working on TV, let alone on HBO. (Another is "Get Out" director Jordan Peele, an executive producer on the series.)

"It's really weird because we've been working on this show for three and a half years now, and I wake up every day as a Black woman," she said. "So in making the show, that wasn't a thing. Because by default, that's the world I live in, and seeing Black people in these spaces is not strange."

"But I also wonder," she adds, "do white men think about that when they make their stories about themselves? Do they worry about…that double consciousness?  So, I don't. I just go with, this is what I love. It has people that look like me, and you're allowed to interpret what you want to interpret from it... If you want to really know something or understand something, you can find a path towards that understanding."

We can enjoy the "Lovecraft Country" ride for what it is: a collection of windows into terror that shift from one week to the next. Or depart, if you haven't ready. Green's aim is to tell many stories within an epic narrative, and she should be afforded the change to run with that desire, unencumbered by expectations to speak to any "moment" aside those of her own creation.