Trump and his supporters have made a mockery of U.S. patriotism

Loving your country is not the same as loving Trump 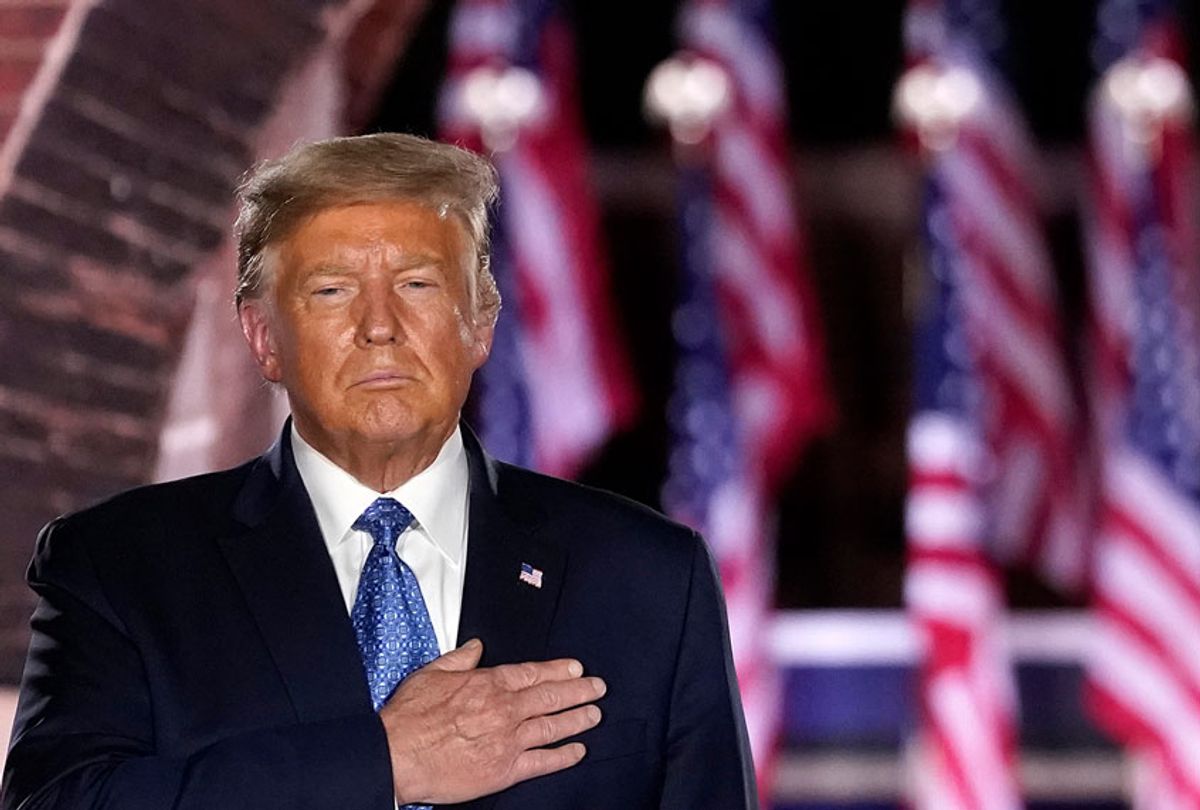 On September 17, in a speech delivered at the National Archives Museum, President Trump announced he was signing an executive order establishing the 1776 Commission, aimed at promoting what he called a "patriotic" and "pro-America" education.  The announcement was a direct attack on the 1619 Project, a New York Times initiative that explores the legacy of slavery in the United States. For Trump, teaching critical race studies is akin to committing child abuse "in the truest sense of those words."

"Our youth will be taught to love America with all of their heart and souls," Trump announced. He accused the left of destroying children's love of their country by teaching the facts of its history — facts, he claimed, wrongly "rewrite" American history as founded on oppression rather than freedom. He's demanded that schools "teach American exceptionalism" and said that schools are teaching students to "hate their own country."

This was just the latest show of Trump's blatant conflation of racism with patriotism and it served as yet another example of how Trump has turned patriotism into a self-serving performance free of any connection to facts. From the start, Trump has attempted to define patriotism not as loving the country, but rather as loving Trump. All we need to do is remember that the same man who dodged military service spent over $2.5 million on a Fourth of July military parade designed to be primarily a celebration of himself.

Before analyzing the damage Trump has done to U.S. patriotism, let me be blunt: "loving" your country is stupid. Patriotism, when it is nothing more than blind adoration of a country, is idiotic at best and fascist at worst. Countries don't need to be loved; they need to be built, critiqued, developed and improved. They need to be held to the highest ideals and they need to face their shortcomings so that they can strive to be better. The relationship citizens have to their nations may always include some affect, but real support for a nation thrives when citizens emote less and reflect and engage more. So, when patriotism is synonymous with loving your country, it is always, already a bad idea.

But setting aside the question of whether it even makes sense to debate who does or doesn't love their country, there seems little doubt that the time has come to push back on the way that the right has conflated loving the United States with loving Trump.

It may have been the case that in the early days of Trump his supporters could rationalize backing a man with an absent moral compass, a profound disrespect for our public institutions, and a deeply and openly narcissistic personality. But the moment when a Trump supporter could hold him up as a welcome alternative to the traditional political establishment has long gone. Any hope that Trump signaled anything positive for this country has now been eclipsed by the avalanche of proof that he holds all of the core values we associate with our nation — whether from the left or the right — in profound disdain.

Take, for example, the information that has poured in just over the last month.

We learned that Trump was aware of reports of financial incentives given to Taliban fighters by officials linked to the Russian government to target and kill American troops in Afghanistan, and he did nothing about it.

We have had multiple confirmations of Trump's inability to appreciate the value of military service, to respect veterans, and to understand the sacrifices those in the military make for their country. And that wasn't all. Trump went after military leadership, claiming that they wage wars in order to boost the profits of defense manufacturing companies, somehow forgetting that, as President, he is Commander-in-Chief of the military.

Trump didn't just attack the military; he attacked our electoral system as well. We have read reports of his concerted efforts to derail the electoral process and suppress voter turnout by criticizing mail-in voting and encouraging voters to vote twice. He has also repeated an expectation that election results could be delayed by months, stoking fears over a peaceful transition.

Then we also learned via Bob Woodward's new book "Rage" that Trump only cares about himself and that he is willing to lie and deceive the American public when it suits him. Woodward reports that Trump knew well that COVID-19 posed a serious health threat, yet he deliberately downplayed it, saying he did so to avoid stoking public "panic."

Yet, he is more than happy to foster public panic if it can help him win re-election. He has specifically suggested that if he isn't elected in November, citizens will be in grave danger.

These more recent developments simply build on years of examples of his profoundly selfish desire to put himself before his office and above the national interest. Only last week we had further confirmation of his self-aggrandizing, unpatriotic behavior when we learned that he manipulated the Department of Homeland Security to downplay the threat of Russian election interference and minimize the threat of white supremacists.

This is a man who hasn't protected our citizens, our health care workers, our military, our national security, or our elections. This is a man who has openly sown social division and purposefully put the future of the nation at risk. Without question, Donald Trump is the least patriotic man to have ever held the office of President. And, what's more, he is entirely transparent about it.

How, then, to explain the fact that he still enjoys such an astonishing level of support by Republicans? Sure, there are dissenters, but the latest Gallup poll numbers still show Trump earning support of 90 percent of Republicans.

So, supporting Trump when he is obviously doesn't care a wit about the United States means you can no longer claim to "love" your country.

By every metric that matters, Republicans' ongoing support for Donald Trump officially ends any claim they have to anything resembling patriotism. Supporting Trump in the wake of these revelations suggests that your patriotism has turned into nothing more than blind fanaticism for a demagogue. There isn't any other way to explain it.

For many, the idea that Trump and his supporters have ruined U.S. patriotism may not matter much given the fact that for many of us patriotism is too closely aligned with an uncritical American exceptionalism. The notion, though, that the rise of Trump signals the demise of Republican patriotism is a big deal for the simple fact that the Republican party has equated itself with U.S. patriotism for decades. In fact, the mere suggestion that they might not be the patriots they claim to be is likely to seem shocking even to those who are not in the party.

But that's the thing. The left has generally allowed the Republicans to be the party of those who "love" their country because, for the left, the idea of loving your country uncritically rather than trying to make it better is ignorant and narrow-minded. If being patriotic means you can't ask questions about the flaws in the system, interrogate injustices past and present, account for the facts of history, and point out deep hypocrisies in the national narrative, then who wants to be patriotic? So, if patriotism means loving your country, then it's no wonder that the left gave free rein to Republicans to have at it.

And that's exactly what they did. The story of how Republicans came to dominate the notion of U.S. patriotism is long and complex, but, as Geoffrey Nunberg points out in "Talking Right," the key to understanding conservative control of U.S. patriotism lies in the deliberate ways that their party worked to merge conservative values with national ones.

According to Nunberg, conservatives exercised a methodical plan to co-opt terms like values, freedom, and patriotism so that these words were uniquely associated with the right — a plan that allowed them to increasingly paint the left as being unpatriotic, against freedom, and morally bankrupt.

This story is key to understanding the twisted patriotism of Trump supporters today, because it wasn't just that the left let the right merge conservative values with patriotism; it was also that the left let the right suggest that anyone sharing a progressive platform hated their country.  This was how it came to be that protesting the Iraq War or demanding accountability for systemic racism or claiming that health care in Canada was better than it is here meant you hated your country.

The love-hate patriotic drama that the right was allowed to develop meant that all thoughtful conversations about what it means to support the United States were absent, replaced, instead, by the right's increasingly hysterical claims that they were the only ones who even knew what our nation's values were. For decades the left avoided claims about their country being great, offering, instead, visions for hope and change and a better future.

The distinction makes sense: the right loves their country in a narrow minded and fanatical way while the left strives to take the best of America's ideals and make them reality. The problem, though, as Nunberg explains in his book, was that the left forgot that they also needed to fight for their critical approach to nationalism to be understood as offering a set of patriotic values too. Absent that, the right was free to own the idea and mold it to their desires.

It is thanks to these developments that Trump was able to claim Ronald Reagan's slogan and suggest that he was going to make America great again. Everyone was already used to seeing these sorts of claims from the right.

The problem, though, is that Trump has not ever wanted to make America great in any way at all. He has wanted to make it his to do with as he wishes. He has openly idolized despots and dictators. He has bemoaned that he is limited by our democratic process and commented glibly that he should be able to stay in office beyond eight years. And none of that unpatriotic, un-American behavior has caused his supporters to waver.

Because Trump's base has spent decades forgetting what it actually means to uphold national values, they've been easily swayed into associating a selfish, self-aggrandizing, unethical and morally repugnant human with a patriot. Content to equate flag waving, eating hot dogs, going to football games and buying guns while wearing a red hat with being patriotic, Trump's base has lost sight of what it means to uphold national values. For them, to love their country means loving Trump.

It's time to push back on this love affair and call out Trump supporters for their anti-American values.  No one should be able to claim that they love their country and still support him. We might disagree on whether schools should focus on teaching students the symbolism of 1619 and we might disagree on whether or not we should idolize the association of 1776 with freedom, but it's time to agree that our nation deserves better than Trump.