Robert F. Kennedy's grandson revealed that he was the whistleblower who sounded the alarm on the pandemic response 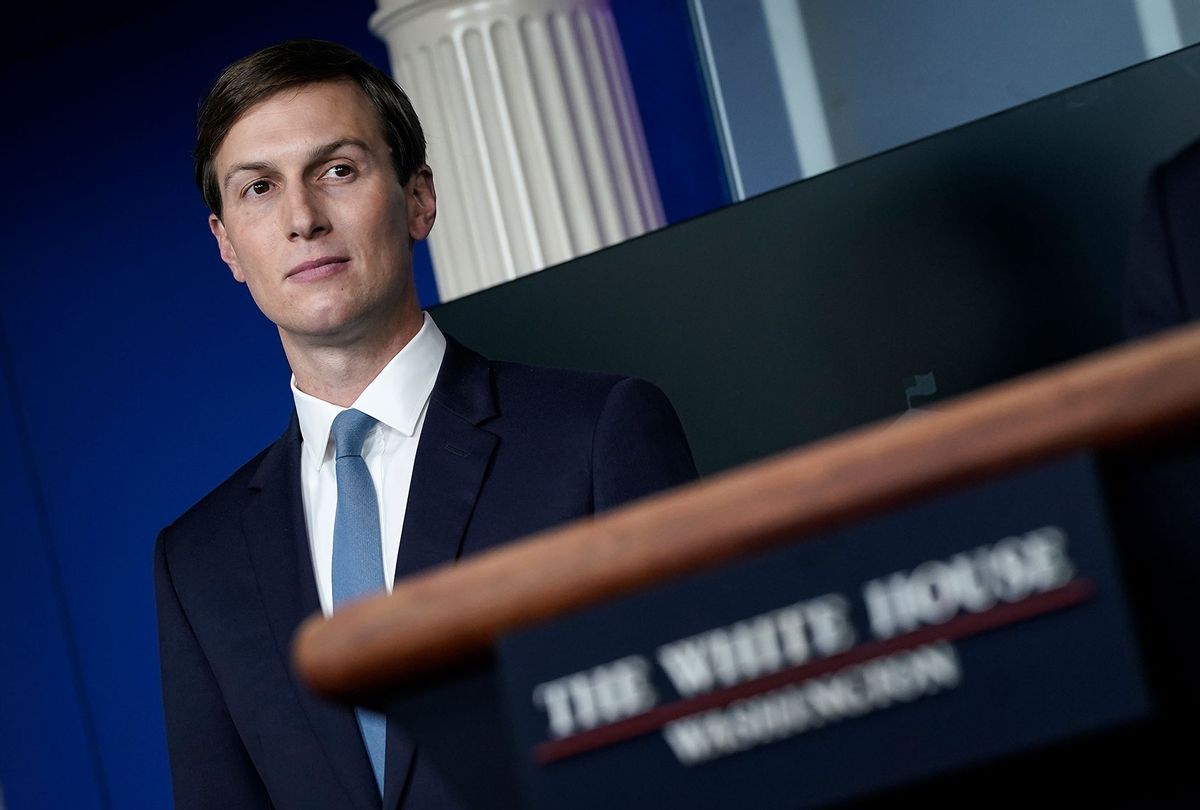 Senior Advisor to the President Jared Kushner participates in a press briefing at the White House on September 4, 2020 in Washington, DC. (Drew Angerer/Getty Images)
--

A grandson of former Attorney General Robert F. Kennedy told The New Yorker that he was the whistleblower that sounded the alarm on presidential son-in-law Jared Kushner's coronavirus task force to Congress.

Max Kennedy Jr., 26, told The New Yorker's Jane Mayer that he sent an anonymous whistleblower complaint to Congress in April "detailing dangerous incompetence" in the administration's pandemic response, according to the report.

"Americans are facing a crisis of tragic proportions, and there is an urgent need for an effective, efficient and bold response. From my few weeks as a volunteer, I believe we are falling short," he said in the complaint in April. "I am writing to alert my representatives of these challenges and to ask that they do everything possible to help front-line health-care workers and other Americans in need."

"I just couldn't sleep," Kennedy told Mayer. "I was so distressed and disturbed by what I'd seen."

Kennedy was advised by a friend to volunteer for Kushner's "impact team" and decided to jump at the opportunity to join the Supply-Chain Task Force in March believing that the job "didn't seem political."

Kennedy, who was surrounded by other 20-something volunteers from various fields with no experience in procuring medical supplies, said he was surprised that they were not intended to be support staff for the procurement team.

"We were the team," he told Mayer. "We were the entire frontline team for the federal government."

The team was tasked with procuring much-needed supplies while equipped with only their personal laptops and private email accounts. Kennedy said that as the weeks went on, he was disturbed by President Donald Trump's continued efforts to downplay the pandemic.

"I knew from that room that he was saying things that just weren't true," he said, adding that the team was too small to meet the challenge.

Kennedy told Mayer that Brad Smith, one of the leaders of the task force, "pressured [Kennedy] to create a model fudging the projected number of fatalities," according to the report. Smith told him that he wanted the model to revise down the number of projected deaths, arguing that experts' models were "too severe," according to Kennedy.

"I don't know the first thing about disease modelling," Kennedy said he told Smith, adding that he turned down the task.

The country marked 200,000 deaths this week, though experts believe the number is even higher.

Kennedy told the outlet that the team was also directed to prioritize requests from Trump's friends and supporters, including "special attention" for Fox News host Jeanine Pirro, who demanded masks for a hospital she favored.

The task force ultimate failed to get enough equipment, Mayer wrote, forcing hospital workers to reuse potentially contaminated equipment or improvise with garbage bags while states bid against each other for critical supplies.

One of the task force officials told Kennedy that Trump was a "marketing genius" because he "personally came up with the strategy of blaming the states" for the failure to procure equipment.

Kennedy ultimately quit the team in April and landed a gig with the Democratic Party.

Kushner has dismissed what he called "hysterical" media reports that the administration's response was highly inadequate, declaring it a "success" despite more than 200,000 deaths.

His "shadow" task force has been widely criticized from within, with one senior official describing the team of young entrepreneurs to the New York Times as a "frat party" that "descended from a UFO and invaded the federal government."

Kushner, like Trump, initially sought to downplay the threat posed by the pandemic and rejected federal action to help states desperately in need of medical supplies, according to Vanity Fair.

"Like Trump — when it comes to fighting the coronavirus outbreak — Kushner appears more concerned with the stock market than with public health," GQ's Luke Darby wrote in May. "One Republican briefed on the administration's coronavirus response told Vanity Fair that as early as mid-January, advisers were sounding alarms, but 'Jared kept saying the stock market would go down, and Trump wouldn't get reelected.'"

Kennedy told Mayer he came forward despite signing a non-disclosure agreement because he doubts the administration can silence him in court.

"If you see something that might be illegal, and cause thousands of civilian lives to be lost, a person has to speak out," he said, adding that the administration's pandemic response "was like a family office meets organized crime, melded with 'Lord of the Flies.' It was a government of chaos."